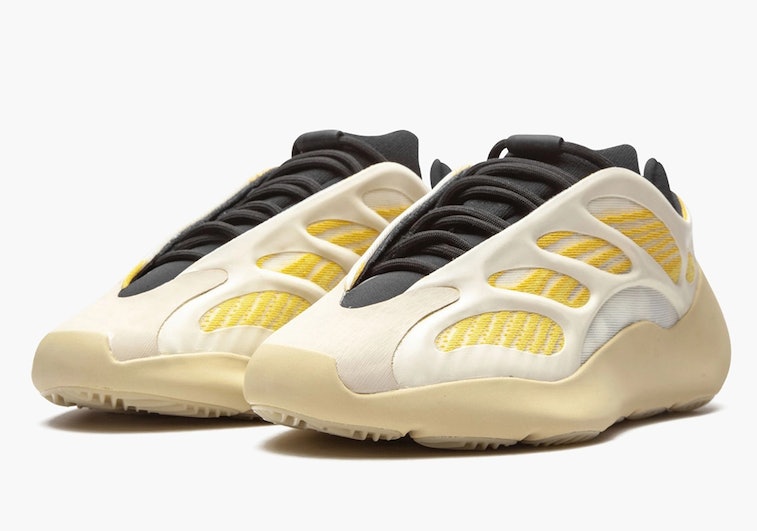 Divorce drama aside, 2022 seems like a big year for Kanye West. The rapper’s Adidas Yeezy brand has a wave of sneakers set to return this year, including its Yeezy Boost 350 V2, “Waverunner” Yeezy Boost 700, “Blush” Yeezy 500 model, and as most recently confirmed, its “Safflower” Yeezy 700 V3.

The latter stands among one of Yeezy’s original models: The Yeezy 700 V3 was first revealed by Kanye on Twitter in 2018, later appearing in the rapper’s Forbes interview and in a viral video co-starring DJ Khaled. It didn’t release to the public until the fall of 2020, when it sold out in seconds. Unlike previous models, the V3 sneaker does away with Boost features entirely and instead opts for a chunkier yet minimal aesthetic.

Chunky AF — A striped yellow Primeknit upper sits underneath a white cage, which wraps around most of the shoe. Reflective 3M elements, seen at the mid-foot and eyelets, add to the sneaker’s detailing while black lining around the ankle and tongue contrasts the light upper, assisted by matching rope laces. A thick EVA foam midsole, paired with rubber outsoles, finishes off the dad shoe design.

While the original Yeezy 700 cost a whopping $300, the “Safflower” V3 sneaker is expected to retail at a more affordable $200. It’ll likely resell for more — but as current StockX listings demonstrate, not by much. As of now, the chunky sneaker ranges from $250 to $375 on the reselling app, meaning you could even get ahead of demand and pick up a pair prior to its re-release.

Patience is a virtue — Those hoping to get the best deal on the sneakers will have to wait until their retail debut, which isn’t expected until later in March. Adidas has been fairly generous with its Yeezy restocks — meaning the shoes could drop alongside other models — but you’ll want to keep an eye out at select Yeezy retailers, Yeezy Supply, and Adidas’ Confirmed app for pairs.

Even with scarcity being driven down less and less each year, fans can’t get enough of Yeezy’s chunky sneakers — and if you’re not quick enough, chances are you won’t get the opportunity to cop the models again. Yeezy drops are notoriously unforgiving, and those that miss out on the restock will have to pay premiums or forgo their sneakers.