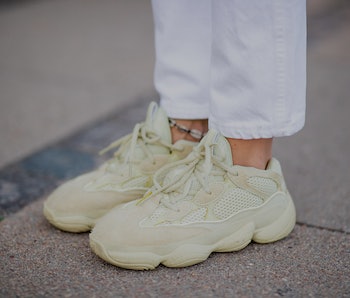 Amid a feud with Pete Davidson, Kid Cudi, and “the media,” Kanye is keeping busy with a slate of new Yeezy re-releases. The rapper’s Adidas-backed brand plans to bring back its Yeezy Boost 350 V2 sneaker, its “Waverunner” Yeezy Boost 700, and its Yeezy 500 model, the latter of which is dropping this week in its original “Blush” color scheme.

Adidas has been fairly generous with its Yeezy restocks, with its Yeezy 500 re-release marking the 15th opportunity to snag the shoe since its debut in 2018. But even with scarcity being driven down less and less each year, fans can’t get enough of the chunky dad sneaker — and if you’re not quick enough, chances are you won’t get the opportunity to cop again. Yeezy drops are notoriously unforgiving, and those that miss out on the restock will have to turn to reselling sites, where prices are already demonstrating the appeal around the re-release: On StockX, the “Blush” 500s are selling for up to $599.

Pretty in pink — The pale pink color scheme of the sneaker adds to its allure, with many sneakerheads coveting the initial design of the Yeezy 500. Uppers made of mesh, leather, and suede all come doused in the light pink hue, nodding to Ye’s previous commitment to neutral shades. Minimal branding, seen only at the toe, midsole, and insole, allows the bulbous shape of the shoe to stand out. In adhering to Adidas tradition, the sneaker boasts adiPRENE midsole paired with the same rubber outsole as the existing KB8 shoe, providing better security with a wide, wavy pattern.

A drop of the “Blush” 500s was originally expected last fall, but like many other Yeezy releases, the sneaker was delayed due to ongoing shipping issues. Similar supply chain issues have presumably raised the price of the shoes as well: In 2018, the 500s retailed for $200; two years later, the same shoe is priced at $210. Still, the inflation likely won’t deter hypebeasts and resellers from going after the restock — paying a premium for kicks has become more standard for sneakers, both within and outside of the Yeezy line.

The restock rat race — If you’re willing to splurge on the pale pink sneakers, check out the Yeezy 500 re-release on February 19 at select Yeezy retailers, Yeezy Supply, and on Adidas’ Confirmed app. Just hope your odds of scoring a W are better than Ye’s at the moment.