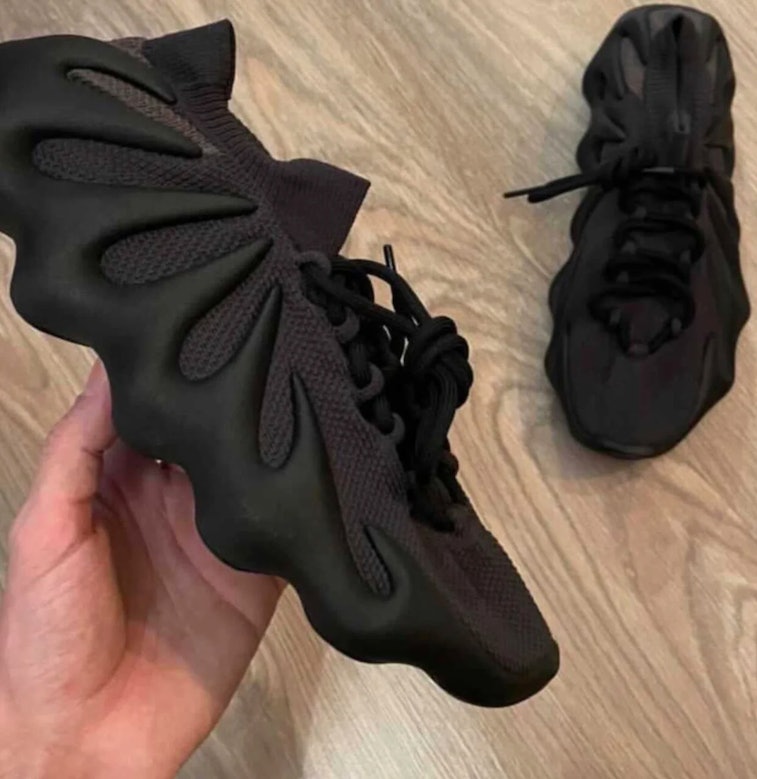 Kanye West’s “Yeezy 450” shoe has been the subject of controversy thanks to its odd appearance — and now, a new black iteration calls for more memes. Boasting the same knit upper and spiky exoskeleton as its cream and tan counterparts, the 450 sneaker will reportedly arrive this spring, if anyone’s interested.

West’s Adidas label Yeezy proves the rapper is no stranger to unusual designs, with his upcoming drops touting the weirdest looks yet. Ye’s recent collaboration with NBA player Derrick Rose has resulted in fish bone-esque clogs, allegedly fit to play on the court with, and Yeezy’s newest Foam Runner launch has us questioning whether the rapper is spending too much time with space-obsessed Elon Musk. Still, Kanye’s strange silhouettes keep selling out and gaining hype — even earning promotion from ex-wife Kim Kardashian. The newest version of the Yeezy 450 begs the question: How much is too much for Yeezy fans?

What are those, but in black — Given the comments under multiple Instagram posts about the shoes, the line won’t be drawn anytime soon. The latest 450 model, dubbed “Dark Slate” is already listed on StockX for $15,000. As long as the unusual designs don Yeezy’s name — and the approval of celebrities like the Kardashians — a sell out looks guaranteed. Comparisons to pork buns, crabs, and the namesake creature from the Alien franchise only seems to fuel desire for the 450 more.

That said, hypebeasts might want to focus on the black iteration of the knit sneakers for a cleaner look. Sporting a sleek tonal upper, the shoe is made up of a lighter black Primeknit, slightly contrasting the darker sole unit that reaches up in a flame-like pattern. The rubber midsole wraps around most of the sneaker before meeting the chunky outsole.

What’s Yeezy worth to you? — Yeezy enthusiasts can expect the silhouette to drop later this spring, perhaps alongside other models. Kanye’s newest Yeezy 450 Slide — teased by ex-wife Kim on Instagram — boasts a similar name and design, flaunting the same wave-like outsole as the 450 sneaker. Given we’ve also had peeks of the knit shoe since over a year ago, a release seems imminent.

Leading up to the release of either shoe, we’re likely to get more in-depth and official imagery — although we will admit we’re nervous about what that will look like. While Yeezy’s rubber 450 Slide will probably retail around $70, similar to the Foam Runner or OG Slide pricing, the 450 knit sneaker is set to launch closer to $200, making it a costly investment. Before buying, maybe realize that looking like a fool can come at no cost — you don’t need to spend $200 to prove your status.