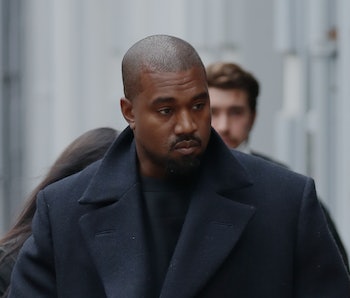 Emerging streetwear brand Infinity G8ds has accused Kanye West of stealing its designs for his Donda merch. According to XXL, the rising label met with Ye to discuss album apparel, but was not credited once the Donda merchandise — featuring a Star of David and cross logo similar to Infinity G8ds’ signature motif — was released.

“We at Infinity G8ds do not have any intentions to tear down another Black person or any brand for that matter; we understand the hard work it takes to build a brand,” a representative for Infinity G8ds told XXL. “Our only intention was to speak up and defend our brand at all costs. We wish that Mr. West and his team would have handled business more fairly and mentioned Infinity G8ds as an inspiration behind his Donda merchandise design and that creative mention could have taken our brand a very long way.”

West’s intentions go south — According to Infinity G8ds, West had representatives for the brand drive from Miami to Atlanta to meet with him to work on Donda merch. Describing the meet-up in hindsight, Infinity G8ds told XXL that Kanye “played them,” and hoped that the rapper decided to “change his ways and learn to treat other creatives with respect.”

Randy Dawkins, the creative director for Infinity G8ds, told XXL that in July, Kanye’s executive chief Willie Wallace requested four samples from the brand. Dawkins alleges that he later had a FaceTime meeting with West and Wallace on July 24, before meeting the rapper in person on July 26 with more items to show. “He was loving the whole design,” Dawkins told XXL, describing West’s reaction to the religious motifs. “[Kanye] started to sell us dreams about doing business with him, and that was the meeting.”

The rapper allegedly promised to keep in touch, inviting Dawkins and another Infinity G8ds representative to dinner but never following up. Instead, West seems to have taken the ideas to Balenciaga creative director Demna Gvasalia, who partnered with the rapper to build the Donda visuals, including the event merchandise.

Gvasalia has been credited for designing the commemorative Donda tees printed with religious iconography, as well as designs featuring the Mercedes-Benz logo and a photograph of West’s late mother Donda. Each tee sold for $100 at the Mercedes-Benz Stadium in Atlanta during the rapper’s second listening event, which raked in $7 million from merch sales alone. Infinity G8ds is not currently asking for a portion of those sales, only hoping that the exposure from West’s alleged theft directs consumers to its original designs.

Copycat behavior — While Kanye has cemented himself as a legendary artist, even breaking streaming records with Donda, the rapper isn’t the best businessman. He’s repeatedly worn Nike apparel in spite of his Adidas Yeezy contract, while also fighting Walmart in court over a look-alike Yeezy logo (and later, counterfeit Yeezy Foam Runners). It doesn’t help West’s case that one of his BFFs, Virgil Abloh, has faced numerous accusations of design plagiarism throughout his career (which Kanye has denied himself).

West certainly has the power, and funds, to squash Infinity G8ds’ claims. Whether he’ll do so or stick to his newly found righteousness has yet to be seen.