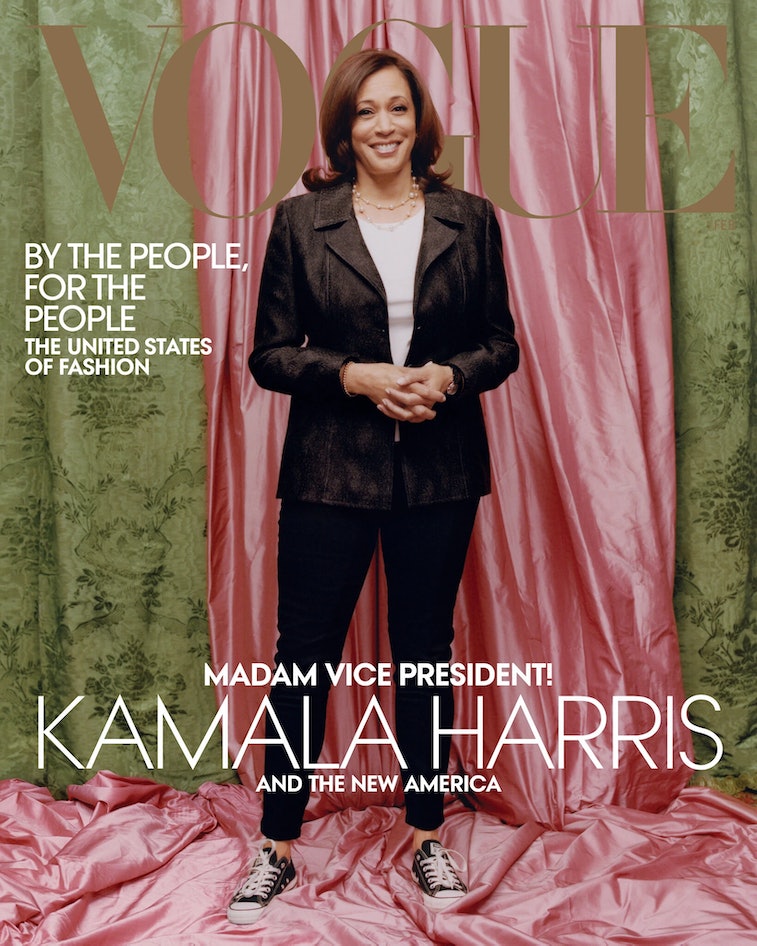 In the middle of a worsening pandemic, in the aftermath of an attempted coup, and during the lead-up to a historic transfer of presidential power, the American people deserve a distraction. But what should have been a euphoric, glossy celebration of strong women — and, in particular, Vice President-elect Kamala harris — has become a complete disappointment

By placing the nation’s first woman VP on its February cover, Vogue sought to grandly welcome the next administration. Instead, the final cover photo was met with critique and disgust, from Twitter to Harris’ own team. When the picture leaked before the magazine’s official announcement, some social media users even thought it was fake. Critics said the pictures made Harris’ skin appear "washed out" and didn’t align with Vogue's glamorous aesthetic.

Photographed in a full-body shot, the Vice President-elect stands with her hands clasped in front of her waist. Behind her, pink and green silk drapes hang, a nod to her sorority Alpha Kappa Alpha. She’s dressed casually in an outfit similar to those worn on her campaign trail: dark blazer, black slim-leg pants, a white T-shirt, and black Converse "Chuck Taylor" sneakers.

But behind the Chucks, what’s most noticeable is Harris’ body language. Her smile is forced and awkward, while her shoulders seem stiff, as if she’s unsure how to pose. The shot is uncomfortable, looking more like a test photo than the cover of a renowned magazine — and that’s the issue.

Fashion faux pas — The photo’s stylistic imbalance is only enhanced by the second digital cover Vogue released alongside its print selection. In a much more vice-presidential manner, Harris is shown against a golden backdrop, wearing a powder blue Michael Kors pantsuit, a confident smile, and an American flag pin. She exudes power, authority, and hope. This is the photo Harris’ team agreed on (see below).

For a magazine that claims to be at the forefront of fashion, Vogue has a long history of racism

According to the Associated Press, the cover photo was switched without the knowledge of Harris’ team. Even worse, the team learned of the change through Twitter, where the picture was leaked prior to Vogue’s announcement. There, the casual Converse photo replaced the political glamour shot that had been “mutually agreed upon,” though NYT reported “there was not a written formal agreement in place” between the magazine and Harris.

Both photographs were taken by Tyler Mitchell, who made history in 2018 as the first Black photographer to shoot a Vogue cover. The editor who oversaw the shoot, Gabriella Karefa-Johnson, and the writer of the cover story, Alexis Okeowo, are also Black. Harris styled herself. But the final editorial decision was made by Vogue and its controversial editor-in-chief Anna Wintour, whose sunglasses aren’t big enough to shade out past accusations of racial insensitivity.

For a magazine that claims to be at the forefront of fashion, Vogue has a long history of racism. The publication has excluded and underpaid Black talent, and has published racially insensitive media on numerous occasions. Over the summer, Anna Wintour addressed the matters via a company-wide email to "take responsibility for those mistakes." Actions speak louder than words, though, and this editorial decision reflects what Wintour's true attitude is.

Nevertheless, Wintour still had something to say about the cover. “Obviously we have heard and understood the reaction to the print cover and I just want to reiterate that it was absolutely not our intention to, in any way, diminish the importance of the vice president-elect’s incredible victory,” she told Kara Swisher, host of the New York Times “Sway” podcast, on January 12. Wintour added, “...what’s amazing about the February cover, to me, is that it is just so joyful and optimistic. And I cannot imagine that there’s anyone that really is going to find this cover anything but that...to me, it’s just a very important, but positive, statement about women, and women in power.”

Certainly, the cover is a statement. But with Wintour also describing it as "welcoming," "relaxed," and "so real," it's hard to imagine she's illustrating any cover of Vogue — much less one depicting the future vice president. As a magazine known for its glamour, Vogue should've stuck with the blue pantsuit cover, which was notably the only image that photographer Mitchell promoted on social media.

Paved with good intentions — In the era of presidential Twitter drama and AOC fan-cams, Vogue thought it could get away with depicting Harris as an everyday person. But in doing so, historical significance — and respect — was lost. As the American daughter of a Jamaican father and an Indian mother, Kamala Harris makes up a lot of firsts for the White House. A little awe for her first cover of Vogue, supposedly celebrating her accomplishments, would’ve been appropriate.

The magazine insisted in a press release that it tried to highlight the vice president-elect’s “authentic, approachable nature,” adding that it released both images to “respond to the seriousness of this moment in history, and the role [Harris] has to play leading our country forward.” The damage, however, had already been done.

Kamala Harris may be “authentic” and “approachable,” but she is also about to become the second most powerful person in the country. She made history. She represents change. Can we say the same for Vogue's cover?

This article was originally published on Jan. 12, 2021