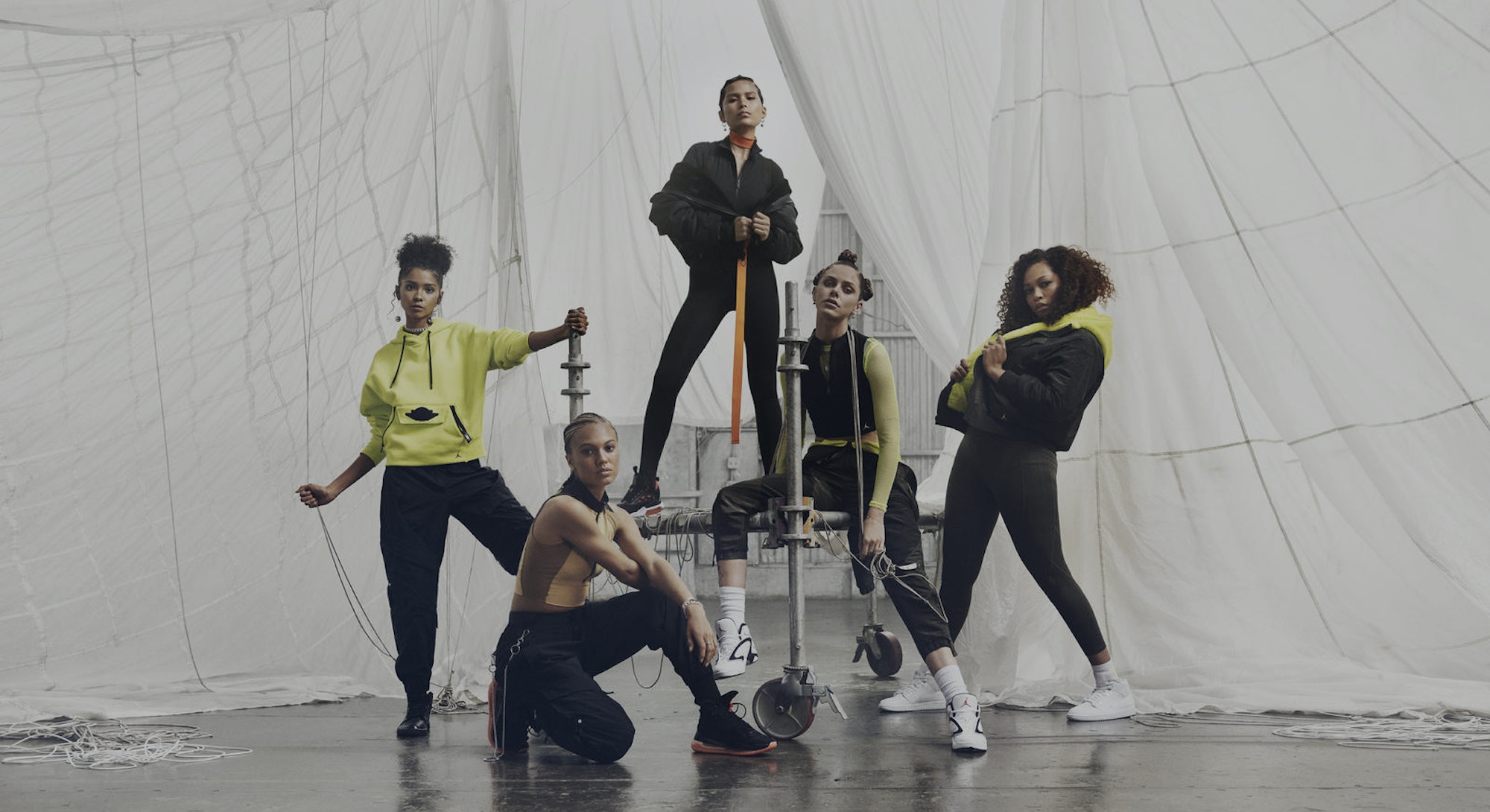 Nearly four decades after the birth of the Air Jordan, the namesake brand Nike created for Michael Jordan is finally turning its attention to women.

When The Last Dance, a documentary chronicling Jordan’s career and championship seasons with the Chicago Bulls, premiered in April, it wasn’t just revisiting Jordan’s court domination or cavalcade of grievances that had people talking. Dissecting his clothes, from the coordinated sweatsuits to the oversized suits to yes, the uncomfortable early iterations of his Air Jordan signature shoe, was half the fun.

And it wasn’t just men who were inspired by Jordan’s larger-than-life style: women, too, quickly began searching for a 2020 version of Jordan’s ‘90s practice uniform to adopt as their quarantine look, or deeming Jordan their latest style icon and attempting to recreate five of his famous outfits.

That affinity from women for Michael Jordan and his style, as well as sportswear at large, is nothing new. But it's taken Jordan Brand 36 years to fully commit to giving women, who drive the majority of overall consumer purchasing, what they want: sneakers and clothing made explicitly for them.

Jordan Brand's efforts started slowly, involving a series of sneaker collaborations with women in streetwear like Aleali May and Maya Moore over the last few years. There was also an exclusive shoe designed with Vogue in 2019. The success of those partnerships led to an uptick in female consumers for the brand, which contributed to Jordan Brand’s first billion-dollar quarter this past December. That was enough of a sign, apparently, for the company to finally go all-in on women, kicking off 2020 with its first womenswear and permanent women’s sneaker collection.

“It could have happened a lot earlier”

“It could have happened a lot earlier and now they are hitting their first billion-dollar quarters and probably kicking themselves for not doing it sooner,” said Ceilidh MacLeod, a digital consultant and the former digital director of streetwear brand The Hundreds.

The Jordan Brand team chalked the delay up to wanting to walk before they ran, an on-brand party line echoed by two female executives. That involved assembling the right leadership team and gathering the right consumers insights, said Andrea Perez, the global vice president and general manager of women and kids at Jordan Brand. “We’ve been serving women for a long time, but the environment was ripe [in the last year] to not just further serve the women who have loved our brand forever but to also introduce the brand to different women,” she said, noting that women now account for 24 percent of all Jordan consumers.

Perez is one of seven female executives who work on the Jordan Brand, which is led by president Craig Williams and is rounded out with 12 other, male executives. The design team skews female, according to three executives including Perez, though the brand declined to share concrete numbers.

That gender makeup, albeit not equal, is better than many sportswear companies have achieved, further begging the question of what took so long for them to launch apparel and sneakers that weren’t geared only toward men. “As someone who’s worked on the brand for almost seven years and has been wanting to design a line for women for seven years as well, it’s a great question,” said Michelle Walter, the design director of apparel at Jordan Brand.

Analysts blame it on the way Jordan Brand had set up its business, pointing to the fact that the brand built a huge children’s business around selling boys shoes to teenage girls and young women, a business that partners like Foot Locker heavily relied on. “The question was: if you make women’s shoes, does she stop buying boys shoes?” said Matt Powell, a senior sports industry advisor at NPD. “They didn’t want to cannibalize a successful part of their business and just hope to transfer it elsewhere.”

But entering the women’s market now, which grew much faster than men’s and kid’s in 2019, is smart, said Powell. “The sportswear industry has really failed to take advantage of the interest from women, as their share of the market is only going to grow.”

Jordan Brand has launched four women’s apparel capsule collections since January, alongside 3-4 women’s sneakers (a mix of extended sizing on men’s shoes and women’s exclusives) each month. The clothing collections bring together modern reinterpretations of famous Jordan pieces like the flight suit, combined with streetwear favorites like the utility pant and bomber jacket — all with more feminine touches like a high waist or faux fur detailing. They also include some surprising brand firsts, like a sports bra.

Sneakers such as the Air Jordan VI retro add details like black suede and a metallic Jumpman hang tag to the brand classic, while the Air Jordan IV x Off-White pair are made with full-grain cream-colored leather and emblazoned with designer Virgil Abloh’s signature air quoted text. There is some pink in the mix, though not enough to make women in streetwear – whose disdain for the pinkification of women’s streetwear has been well-documented – run in the opposite direction.

“We’ve learned that our girl is super multi-faceted”

Making a larger investment in the women’s market has paid off for the brand so far. The overall Jordan women’s business reported double-digit growth worldwide in the fourth quarter and in the larger market, it’s outpacing mens and kids, according to Perez. The Spring and Summer 2020 women’s apparel capsules have had complete sell-through on Nike’s direct channels, the company reports, while Jordan’s Women’s launches are the leading source of new female members on parent company Nike’s SNKRS app.

Alongside reviewing quantitative and trend data, the Jordan Brand team spoke to female consumers around the world to gain insight into what exactly women wanted from them. The loud and clear answer was inclusivity, which drove the brand to offer apparel in plus-sizes as well as both Western and Asian sizing, the latter of which runs smaller. “We’ve learned that our girl is super multi-faceted, not just in what she does but in her body type and how she styles her clothes,” said Walter. Versatility – the ability to wear clothes and shoes in different settings, dressed up or down – was also key.

Female shoppers, some of whom would prefer to just shop the men’s department with expanded sizing, are torn on whether a dedicated women’s line is actually necessary, however. “Pulling out a separate women’s line almost feels like going backwards in some ways – it’s like dividing us into the football team and the cheerleaders, with separate uniforms so that we know our roles,” said MacLeod.

Liz Beecroft, a mental health advocate and social worker who has collaborated on products and campaigns with a range of street and sportswear brands, including Nike and The Hundreds, is more optimistic. “There’s a lot of room to grow but it’s nice as a woman to know that we’re being heard and taken seriously in this industry,” she said. “We often refer to streetwear as a boy’s only club but now the brands are setting a new precedent.”

Jordan Brand has experimented with more gender fluid offerings like its 23 Engineered line, which sells basics like hoodies and sweats in both women’s and men’s sizes. The company has also seen the usual roles reversed, with men shopping more from the women’s department. The women’s utility pants launched in January were a particular hit among men, according to Walter, along with The Air Jordan x Off-White IV’s, which were offered only to women for the first 24 hours of launch. “A lot of guys wanted them and it was cool to have the tables turned and see them bummed for once about not having instant access,” said Beecroft.

But the company doesn’t foresee an entirely unisex future. “I don’t think women necessarily want what men have, they just want what they want,” said Perez. “It’s really important to us to keep offering products that are specific for her because there are fit and tailoring needs that are specific for women’s bodies.” Beecroft echoed this sentiment, noting that while women do love to wear baggy or oversized clothing that can be found in men’s collections, “we also want to have clothes that fit our curves and allow us to feel sporty and feminine.”

While Jordan Brand has offered some men’s shoes in women’s sizes for years, and will continue to, there’s also a benefit to creating dedicated women’s sneakers like they did with the Off-White run, said Powell, of NPD. “Male feet are more rectangular, and women’s feet are more triangular, so that disparity can create a fit and comfort issue,” he said.

It’s because of those sizing disparities that Jordan will debut another new women’s sneaker this fall, the Reign, a reimagined spin on the Jordan XIII that’s sleeker, narrower, offers more support and is the first Jordan shoe to incorporate Nike’s Vapormax technology in the sole. “Comfort and easy entry were key insights that women around the world have told us they wanted,” said Louisa Page, the design director of women’s footwear at Jordan Brand. “The style nods to Jordan’s history while giving her superior comfort and wearability.” Unlike many of the past women’s sneaker styles, it will not be made available in men’s sizing.

Looking ahead, the team at Jordan Brand is focused on continued expansion of its women’s offering, including new collaborations with women in the streetwear space. Despite its late start, Perez says the company is committed to breaking down the barriers to both access and respect that women have long faced in the category. “We’re focused on expanding the aperture of what women’s style can be.”