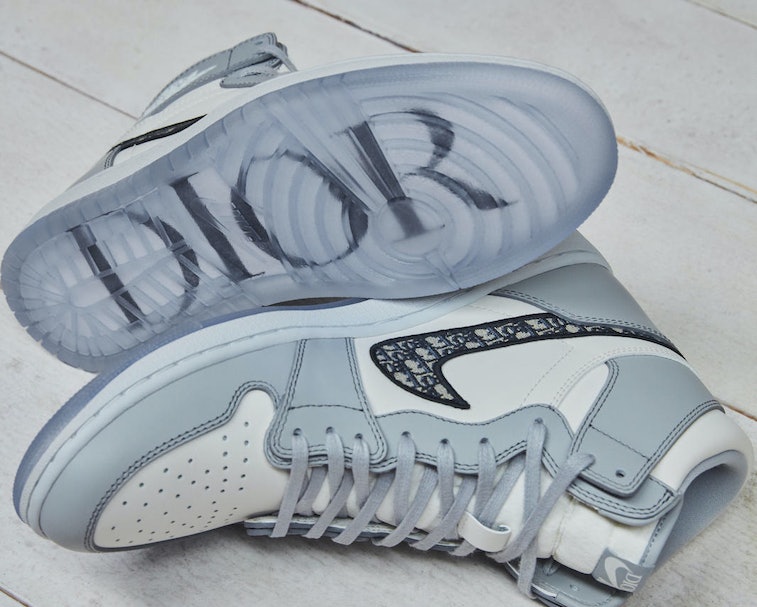 After months of anticipation or derision, depending on who you ask, Nike has finally unveiled its full capsule with Dior. As expected, the two brands are collaborating on both the high and low version of the Air Jordan 1, constructed with premium leather. What's surprising is how extensive the collection is, as it also covers buttoned-up attire, athletic apparel, and accessories.

Jawn after jawn — On the formal end, there's a minimalist wool suit that leaves the branding to the buttons. The small logo hit features Jordan Brand's wings logo transformed to read "Air Dior." Inside the blazer, blue and white stripes maintain the color palette seen throughout the goods. A cashmere sweater, polo, jacquard tie, and silk scarf provide even more opportunities to get dress smart while repping the GOAT. It's weird, but it shows Dior's bringing as much to the table as Jordan. Creative director Kim Jones has already injected streetwear into Dior, so why not pass on the brand's impeccable tailoring to the Jumpman?

Likewise, the more casual garb gets more luxe. The grey hoodie is done up in suede, while the shorts — featuring the instantly recognizable lines of the Chicago Bulls — are made of silk. Paired with the latter is the MA-1 bomber jacket, a classic Jordan piece. Shirts and a bob hat round out the apparel, while the leather goods will include a pouch and wallet. Dior's Oblique pattern lines many of the pieces, marking an entirely new application for the precious motif, and all the pieces are handmade in Italy.

So what's the beef? — Ever since the sneakers surfaced at the top of the year, they've been criticized for being too simple and too expensive. Rumor has it they'll retail for $2,000, which some see as overpriced for slapping Oblique on the swoosh, tweaking Jordan's existing logos, and doing it all in Dior's signature shade of gray. While it's done little to assuage critiques, the whole point is that the sneakers are made of top-notch leather and are handmade in Italy. This is the price you pay when using artisans instead of cheap factories.

I'm already on record defending the shoes — not every collab needs to be as loud as those of Travis Scott, who, ironically, is the model for Dior x Jordan — and I appreciate the clothing for being just as subtle and luxurious. That said, neither I nor many of the people talking about this will actually be able to afford it.

Where can I buy (or dream of buying)? — The collection is set to launch in April at select Dior stores and pop-ups. While pricing details still haven't been announced, we're looking at a range only feasible for, like, rappers and athletes. But don't let that get you any less excited for this historic partnership. It's still fun as hell to drool over.