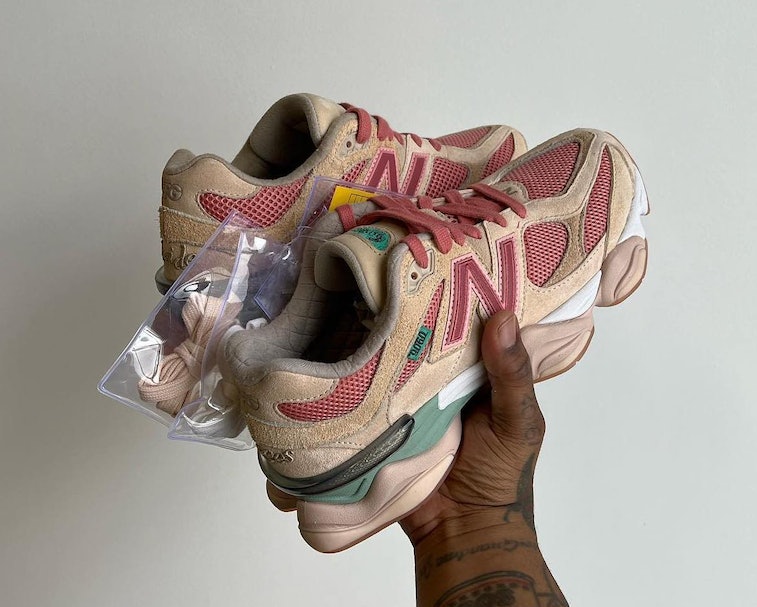 Chicago-based designer Joe Freshgoods is keeping his footwear momentum going strong. After a successful drop of his New Balance “Conversations Among Us” sneaker collection, for which he served as creative director among a group of Black associates, Freshgoods is bringing his energy back to his own releases.

One of New Balance’s best collaborators is returning to a release a version of the 9060 nicknamed “Inside Voices.” The theme invokes the thoughts in your head, as opposed to hushed tones, and is set to see a release quite soon.

JFG for NB — The “Inside Voices” variant comes with an earthy color palette with a similar vibe to some of Freshgood’s prior New Balances, including the 990v3. A dark salmon mesh upper gets fitted with pinkish beige suede overlays for some depth and dimension, while the sidewall “N” and laces are also done in the dark pink shade. Sage green serves as the contrasting tone and takes its place on the tongue, 9060 tags near the collar, and the back half of the midsole.

For more tasteful hits of branding, “JFG” is imprinted into the heel, and “Inside Voices” is spelled out below across the left and right shoes. Freshgoods also revamped the sole of the sneaker with curves and indents layered with tan, white, and the aforementioned sage green.

The best come from Chicago — At this point, Joe knows the ins and outs of New Balance like the back of his hand and has the sneaker collection to show for it. His recent “Conversations Among Us” pack included a 2002R and 550 sneaker, both done in buttery color palettes and launched with meaningful storytelling. It was important for Freshgoods to amplify Black voices in the campaign, also presenting a video starring Kawhi Leonard that celebrates the “dynamic of Black men, nonverbal communication, and the nonchalant head-nod.”

All of his releases focus on some aspect of the human experience, from relishing in “outside clothes” to embracing the notion that “no emotions are emotions.” The upcoming 9060 emphasizes the importance of imagination, and the inside of the shoebox sports the text, “Shhhhhh…Be quiet…our imaginations are speaking.”

As announced by the designer on his Instagram, the New Balance 9060 “Inside Voices” will launch in two weeks on the New Balance website. Freshgoods shows no signs of slowing down, just four months after Joe closed the doors of his own Fat Tiger Workshop in Chicago; we can only imagine what he has in store next.