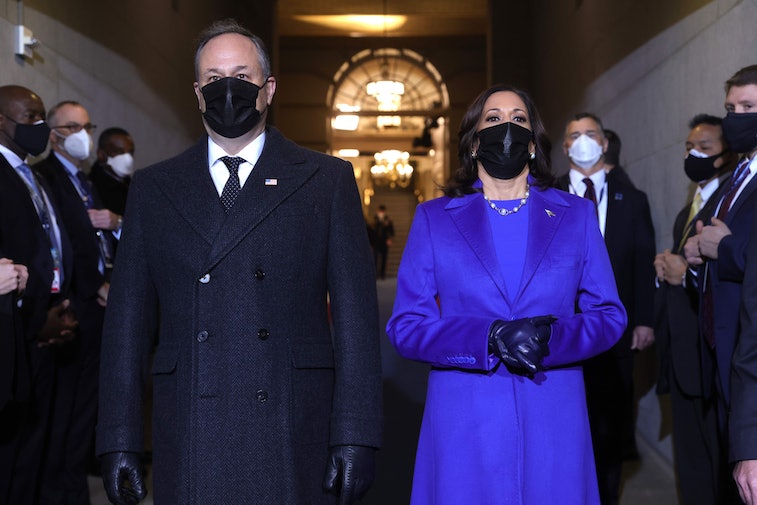 With a dramatically reduced crowd, increased security, and endless calls for “unity,” the inauguration of President Joe Biden and Vice President Kamala Harris is far from the norm. But still, with millions of Americans watching behind screens, it was also a prime opportunity for displays of fashion diplomacy, from Harris herself to First Lady Jill Biden.

On Wednesday morning, when the nation witnessed history in sweats — both physically and stylistically speaking — Joe Biden stayed cool in a custom blue suit by iconic American designer Ralph Lauren, who made the suit, tie, and overcoat in the same fabric as his mask. The new president’s outfit echoes his message of unity across the nation, with many future looks expected from American designers. Harris’ husband (history’s first second gentleman), Doug Emhoff, also wore Ralph Lauren.

One nation, under awe — As for new VP Kamala Harris, she wore a stunning purple coat from Black American designer Christopher John Rogers, with shoes from Sergio Hudson. The purple is a nod to Shirley Chisholm, the first African-American woman to run for President of the United States. It is a color historically associated with nobility, an original color favored by the suffragettes, and perhaps most notably, a metaphor for bipartisanship — red and blue together.

The incoming First Lady followed Harris’ lead in another monochromatic outfit, donning an ocean blue wool tweed coat and dress by Alexandra O’Neill, who founded her label Markarian in 2017. The label is sustainability-minded, with all clothing made-to-order to reduce waste. Both pieces worn by the First Lady are embellished with Swarovski pearls and crystals placed in a floral pattern on the dress. The color blue was chosen to “signify trust, confidence and stability,” according to a press release from Markarian.

Attending as former First Ladies were Hillary Clinton and Michelle Obama, who also sported monochromatic looks. Obama dropped jaws with a maroon pantsuit, gold buckle belt, and matching jacket, also made by Sergio Hudson. Clinton, on the other hand, joined Harris by wearing purple, the color she wore during her concession speech after losing the 2016 presidential election to Donald Trump.

Inaugural poet, 22-year-old Amanda Gorman recited her moving poem "The Hill We Climb," in a bright yellow Prada coat and jewelry gifted to her by none other than Oprah. Her look was inspired by a previous inauguration poet, Maya Angelou. According to an interview with Vogue, Winfrey got in touch with Gorman after learning she would read at the ceremony, and helped craft a contemporary spin on what Angelou wore while reading at Bill Clinton's inauguration in 1993. Oprah also gifted her Angelou's 1993 black coat and gloves.

Of course, Biden and Harris' historically diverse families wore their best fits too. Ella Emhoff, Harris' stepdaughter, wore an embellished, strong-shouldered Miu Miu coat, accented by an embroidered, floppy collar. Biden's four granddaughters joined in on the monochrome trend, with each wearing a different color. Naomi, 27, wore white; her sister Finnegan, 22, wore a camel coat and mask; their youngest sister Maisy, 20, wore black; and their cousin Natalie, 16, went bright in a pink coat and mask. Maisy accessorized with a pair of Air Jordan 1s in the colorway "Court Purple."

Musical performers showed up and out as well, with Lady Gaga saluting the red, white, and blue in a navy Schiaparelli fitted jacket, symbolic golden peace dove pin, and red silk ballgown. J. Lo looked stately in a monochromatic white outfit from Chanel, perhaps a nod to the suffragists. Even Garth Brooks added a patriotic, American touch in his blue jeans.

Lawfully good looks — The decision to wear a slew of American designs to the Inauguration is no doubt a signal towards how the Biden-Harris administration plans to support and address the divide in our nation. The array of cool-toned monochromatic fits align with Biden’s repeated goal of “unity,” which he mentioned once again in his inaugural address. But the decision to wear Alexandra O’Neill, Christopher John Rogers, and Sergio Hudson also signals another thing — good taste.