"No one’s buying a Shoe Surgeon or Warren Lotas shoe to trick their friends." 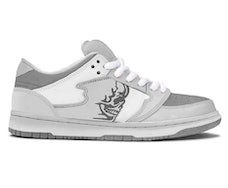 Jeff Staple, collaborator on both Nike's original Pigeon Dunk and the Warren Lotas version that drew a lawsuit, has indirectly defended the "bootleg" designer. Choosing his words carefully, Staple touched on the wider phenomenon of recreating existing sneakers in an interview with YouTuber Ben Kickz.

"I’m always a fan of DIY bootleg culture," Staple said. "I just love it… That’s how Staple started. To me, that’s where true creativity happens."

Staple pointed toward Bape's Sta sneaker as an example of such creativity. The sneaker is an overt riff on the Air Force 1, replacing the Swoosh with a lightning star and using either the words "Ape" or "Bape" in place of "Air" on the midsole. Bape has sold the sneaker in numerous variations since 2002, and Nike has never filed suit.

Trademark suits with regard to footwear and apparel are notoriously difficult to win, and it's very well possible Nike has never gone after Bape because the Japanese brand has the means to defend itself in court. Lotas, however, is a much smaller seller and acquiesced to Nike's demands before the case went to judgment.

Where the case is at now — Nike first filed suit against Lotas over three of his SB Dunk recreations, including the "Heineken" and Stüssy "Cherry" releases in addition to Staple's riot-inducing sneaker. In a subsequent filing, Nike to sought an injunction to prevent Lotas from fulfilling orders for his sneakers, which were done on a pre-order basis, at $300 apiece.

Lotas then announced he would offer replacement sneakers in place of his planned delivery, while continuing to argue that Nike is "making unnecessary demands in order to intimidate other small businesses from exercising their creative freedom in the future."

The replacement sneakers made a more noticeable effort to diverge from Nike's design, and the result was not pretty. Lotas would have another problem on his hands, however, as he failed to change the shape of the outsole — resulting in yet another lawsuit by Nike.

Staple's broader defense — While Staple — who has collaborated with Nike as recently as this fall and was not named in the suit — was sure to hedge his bets by saying he understands the arguments of both sides, he did obliquely challenge one of the core arguments in Nike's suit.

Nike has sought damages in its lawsuit and has argued the company "has suffered, continues to suffer, and / or is likely to suffer damage to its trademarks, business reputation, and goodwill that money cannot compensate."