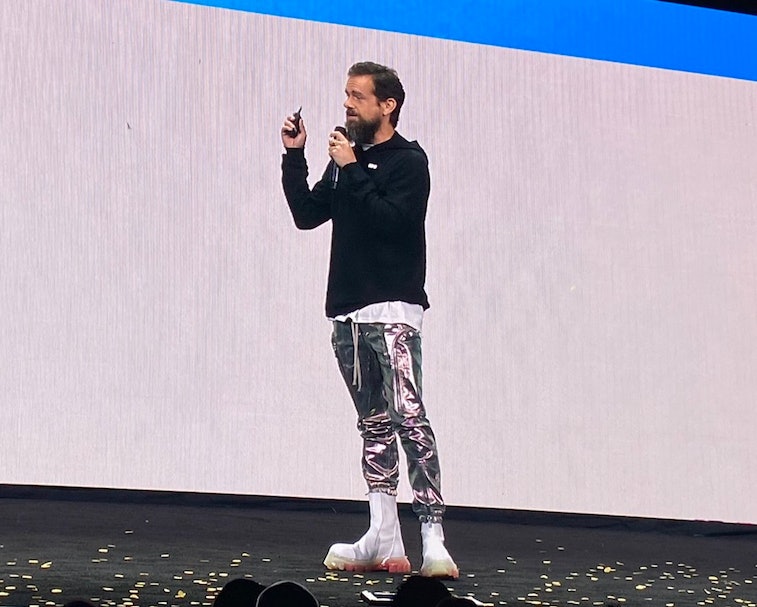 Twitter employees congregated in Houston this week for the company’s annual #OneTeam summit. You may have seen tweets with NASA photo opps or a panel featuring Jameela Jamil and Shea Serrano. But the most important thing to emerge was a photo of CEO and founder Jack Dorsey on stage in a truly audacious fit.

Letting his freak flag fly — There he was, the tech mogul, making his big beard appear modest compared to the tight holographic pants tucked into his high, sneaker boots. Look closer and the pieces get even more fascinating. The pants feature a series of zippers and eyelets, as well as an exaggerated drawstring. Meanwhile, the shoes on Dorsey’s feet are reminiscent of Chelsea boots up top, anchored by a two-tone translucent rubber sole that looks like a tumor.

His lower half draws so much attention you may not even notice his choice of tops: a black hoodie over a longer white shirt. You could read the hoodie as staying true to his Silicon Valley roots, while trying to fully freak it.

What kind of CEO would wear this while addressing his employees, you may ask? And more importantly, where the hell did he get these clothes? The answer to the second question is Rick Owens, the designer Dorsey has been obsessed with for years. For those who’ve followed his style, the outfit should come as no surprise — even if it’s Dorsey’s most daring yet.

White Mega Bozo — No, that’s not what I’m calling Dorsey. The white boots are called Mega Bozo Tractor boots and retail for nearly $1,400, providing an all-too-easy insult if you’re offended by the design or the price. The pants are Tecuatl Bauhaus cargos, which go for $1,600. Both are from Owens’ current season, making for an obvious pairing.

I take no issue with either the individual items or them being paired together. I also applaud the hoodie and shirt combo on top, which provide great layering together and a muted counterbalance to all the noise downstairs. My beef is with the final execution, which proves just how hard it is for anyone to pull clothes from the avant-garde designer who somehow merges technical and goth apparel. Sorry, Jack, it’s just not as easy as it should be to, say, ban Nazis from your platform.

Where did he go wrong? — See all those wrinkles around his knees? The unfortunate stack comes from the elasticized cuff sitting atop the boot instead of down around it. It may even be a consequence of him originally tucking the pants into the boot, which caused them to ride back up.

Regardless, Dorsey’s either wearing pants too tight to bring down farther or consciously chose to keep them there, a move that puts him too close to the fuckboi trope. The stacked denim look was in for a minute around 2015, which you can attribute to Kanye West and his devotees, but has long since gone the way of the most basic of hypebeasts.

I applaud Dorsey for taking risks, which is how the best fits of all are born. But this is proof of how difficult it is to wear these clothes, even if you’ve been doing it for years. Rick Owens: it’s not for the amateurs, folks.