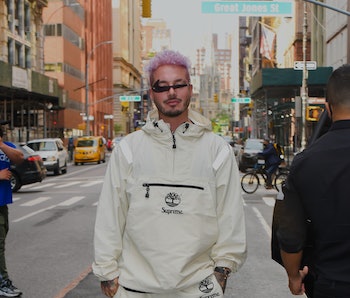 While promoting his album Jose — set to release this Friday, September 10 — J Balvin teased another upcoming project bringing music to fans’ ears. On Instagram, the reggaeton star hinted at an impending collaboration with Jordan Brand, posting a photo of the label’s Jumpman logo with the caption “AIR BALVIN.”

Balvin’s caption also read “la saga continúa,” or “the saga continues,” furthering beliefs that a second partnership with Jordan Brand could be on the horizon. He previously worked alongside the brand in 2020, becoming the company’s first Latin artist collaborator with his kaleidoscope-like “Colores y Vibras” Air Jordan 1. And while Balvin followed the massive footsteps of Drake and Travis Scott as one of Jordan Brand’s musical partners, his sneakers sold out just as quickly as anyone else’s (#latinogang).

Wear Air Balvin — The artist hasn’t revealed what model he’ll work on next with the sneaker brand, although it’s likely to sell out just as fast. For now, all Balvin has teased is a close-up of a white Jumpman logo which features a special white and green Air graphic bearing his signature lightning bolt motif.

This may be one of the few times we ask for a farther look of the shoe, as Balvin’s cryptic shot makes it impossible to tell what model he’s showing off. Still, with Jordan Brand history in mind, the partnership could be working on a commemorative model like the Air Jordan 6, Air Jordan 12, or Air Jordan 17, all of which celebrate 30th, 25th, and 20th anniversaries this year, respectively.

Yet Balvin isn’t known to follow tradition: His collaborative Air Jordan 1 proves that with scalloped edges, a pink sole unit, and an ombré rainbow upper. The artist’s next shoe could easily be something outside of Jordan Brand’s signature sneaker line, like the more modern Jordan Delta 2.

See more soon — No matter which model Balvin and Jordan Brand have decided on, it’s guaranteed to be just as experimental (and full of good vibras) as his previous sneaker. Hopefully, we’ll have a better look at the upcoming shoe soon — potentially this weekend, as Balvin’s album Jose releases September 10.

This article was originally published on Sep. 8, 2021