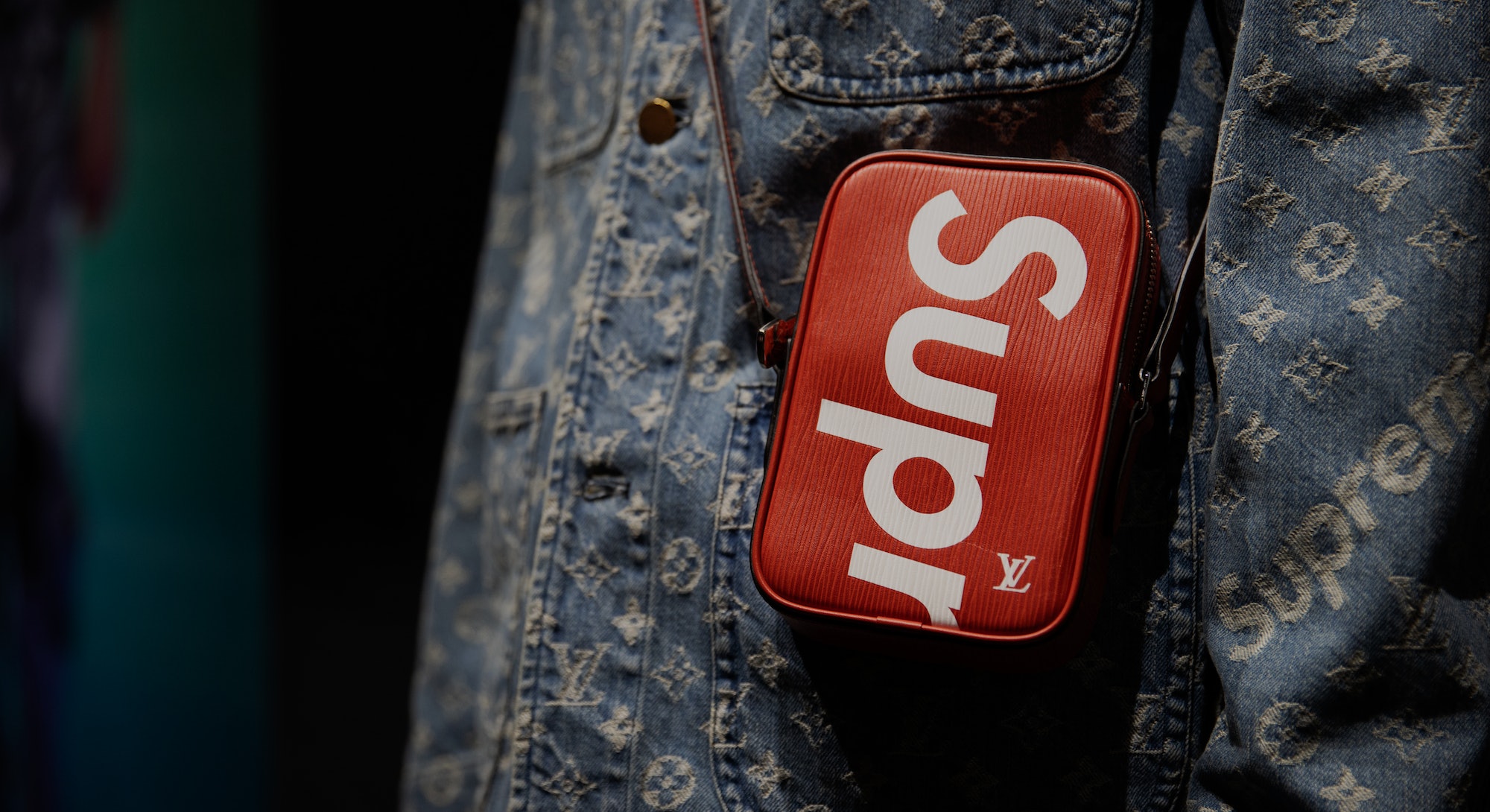 Like many others in the early days of Supreme’s explosion, Nick Wyer’s interest in the brand was piqued by Tyler, the Creator.

The then 19-year-old rapper burst onto the scene with his viral “Yonkers” video early in 2011, in which he wore a Supreme six-panel hat while eating a cockroach and then hanged himself. The New York City streetwear brand would provide Tyler, the Creator’s wardrobe in his christening as rap’s hottest and most divisive young star, from his appearance in a Supreme Box Logo hoodie on Jimmy Fallon’s TV show and for many years to come in concert, on television, and all over social media.

Supreme’s profile blew up as Tyler, the Creator’s ardent fanbase sought to dress like him, bringing the underground brand for skaters to a much wider audience.

Wyer became enamored with the brand a year later in 2012 and began growing his collection, adding new pieces from Supreme’s weekly drops and digging into the archives to pick up older apparel from the ‘00s. He saw Supreme as the leading innovator in streetwear that introduced him to artists and cherished some of his favorites through shrewd collaborations, such as Nan Goldin or Mobb Deep. Supreme’s more subtle, less-branded attire is what Wyer favors — his favorite piece being a paisley hoodie from 2011.

Now a 24-year-old sourcing specialist in the apparel industry, and like many other streetwear and fashion devotees of his generation, Wyer has largely moved on from Supreme. Tyler, too, is no longer clad in Box Logos but is instead firmly in his luxury era, defined by a love for knitwear and high fashion houses such as Louis Vuitton and Gucci. For the vast majority of the last decade, it appeared as if Supreme could do no wrong — but now, just over a year since the company was sold for $2 billion, enthusiasm for the brand is clearly waning.

Looking at resale prices and the amount of product still available after Supreme’s weekly Thursday drops reveals that the appetite for the brand is no longer as crazed as it once was. Prices on the secondary market are down across the board, even for the pieces that were and still are the most sought after. The recently released Tiffany Box Logo T-shirt can be had on apps such as StockX for as low as $300 while the Emilio Pucci Box Logos from last summer dropped to as little as $110. These prices still count as markups of 200 to 600 percent compared to retail, but they’d have been unthinkably low as recently as two or three years ago, when anything with a Box Logo would fetch $800 at minimum.

“You have to be very, very careful about how fast you’re growing in order to keep a brand hot.”

While many of Supreme’s pieces still sell out rapidly online at 11 a.m. each Thursday, the amount of stock still left over in the minutes, hours, and days after is also remarkable when compared to past drops. The mad dash to purchase anything but the most high-profile of releases is all but gone, making it easier to cop Supreme at retail or with a lower markup at resale since the days prior to Tyler, the Creator helping to set the brand on fire.

So, what’s changed for Supreme? In some ways, nothing; in many more, everything. The brand’s general approach since it was founded in 1994 remains static with weekly, limited product drops and little other engagement with the outside world through interviews or other media. The products themselves are also largely the same, including graphics with an anti-establishment attitude and basics such as hoodies or canvas pants done well and at a reasonable price. Collaborations still include the likes of Rick Rubin and “First Lady of Graffiti” Lady Pink, the sort of musicians and artists who align with the values of Supreme and its audience.

Drastically different is the scale of Supreme’s operation and the attention it’s received. Each product release is no longer quite as limited as it once was, a natural result of the staggering figures that have been invested in the brand. The Carlyle group, a shadowy private equity group with long-running ties to the military and police industrial complex, paid $500 million in 2017 for a 50 percent stake in Supreme. Just three years later, VF Corp. — the parent company of The North Face, Timberland, and others— paid $2 billion to acquire the brand in full. Supreme’s new parent company promised at the time to leave its $2 billion baby alone to continue doing what it does best, with founder James Jebbia in charge, but that promise can only go so far with so much money at stake.

Supreme has been opening new stores across the world at a much more rapid pace. Prior to 2016, new outposts opened on an average of roughly one every three years. In the years since, new locations have come to Brooklyn, San Francisco, Milan, and Berlin — the latter two of which were both christened in 2021. More stores means more product, making the market even more flush with Supreme.

“I just don’t think I relate to that crowd anymore.”

A large part of the Supreme’s appeal has been the proposition of wearing something few else could acquire, but that quality of exclusivity is basically gone today. “Scarcity and growth are oppositional, in my opinion,” Matt Powell, vice president for the NPD Group and an expert in the sportswear industry, told Input in an interview. “You have to be very, very careful about how fast you’re growing in order to keep a brand hot. Jordan is a $3-billion-plus brand, but it took 36 years for it to get there.”

The truth is that Supreme’s bubble may have always been waiting to burst. Hype is a fickle quality, and streetwear’s growth from a subculture to the trend of choice for the masses means people will inevitably move one. The brand’s core audience used to be skateboarders, true streetwear nerds, and fashion insiders — but today seemingly everyone wants and has a piece of Supreme.

When Supreme first knocked off Louis Vuitton in 2000, garnering a cease-and-desist letter, the idea was to take the piss out of luxury and its exorbitant status symbols. 17 years later, the two brands embraced each other for a landmark collaboration — cementing the peak of Supreme’s hype but moving away from its anti-establishment values.

Wearing Supreme no longer says you’re in the know but, instead, is more of a signal that you’re a sheep in sheep’s clothing. Further mitigating the brand’s appeal is the swath of insufferably corny people who’ve turned Supreme into their personality, trotting out Instagram posts featuring outfits with nary another brand worn and shelves overfilled with Supreme accessories where others might keep books. At best, Supreme should be a part of someone’s broader personal style, but too many have been content to both start and stop at one brand.

So much of Supreme’s success has been defined by resellers, the culture vultures who would gobble up all the product in sight.

“I just don’t think I relate to that crowd anymore,” says Wyer. “The Prodigy T-shirt, for example, that’s one of my favorite ones because I love Mobb Deep. I feel like it really represents the brand, but a lot of the people wearing it don’t share that context – they’re just wearing it to flex.”

As soon as VF Corp. announced it had acquired Supreme in 2020, industry insiders immediately began to question if the brand could remain “cool” while making good on a $2 billion investment. Web Smith, founder of the media and commerce newsletter 2PM, immediately tweeted that morning that the new parent company would get a great short-term return on investment, adding that “Supreme’s true brand equity would have only been achieved with an owner like LVMH: fewer stores, harder to buy, greater mystique.”

So much of Supreme’s success has been defined by resellers, the culture vultures who would gobble up all the product in sight and sell at a significant profit to fans of the brand who weren’t quick or lucky enough to purchase at retail. But with resale prices dropping significantly, the same small fortunes for each item are only guaranteed. There are less people at the end of the line who actually want Supreme’s goods enough to keep and are willing topay a fortune for them, and eventually resellers may no longer see flipping as worth the trouble — meaning only less competition at the point of origin.

Nearly 10 years after blowing up within the broader culture, it’s also harder for Supreme to surprise anyone. New products no longer feel as fresh or inventive, and younger streetwear brands such as Palace and Brain Dead offer much more in the way of excitement. A new crop of brands, including Aimé Leon Dore and Noah, have also emerged with a more grown-up essence of Supreme-meets-Ralph Lauren — and on any given day in New York City’s Nolita neighborhood you’re now more likely to see a longer line at ALD than Supreme.

Even with the fervor for Supreme dying down, it’s still hard to see the brand fading into complete obscurity. Chasing a permanent spot as the hottest thing around is a fraught proposition, and Supreme could eventually fall back on its audience and become a sort-of heritage streetwear brand with a consistently strong output like Stüssy. But if VF Corp. continues to push Supreme too hard it could instead become more like BAPE, a shadow of its former self and unoriginal to the point of parody.

Jordan Brand no longer has mystique, either, but it has been able to balance scarcity and massive profits by practicing restraint. Had Supreme remained independent, it would have had total say in the matter. Instead, all eyes are now on VF Corp. to see if it bleeds every ounce of cool Supreme still has left.