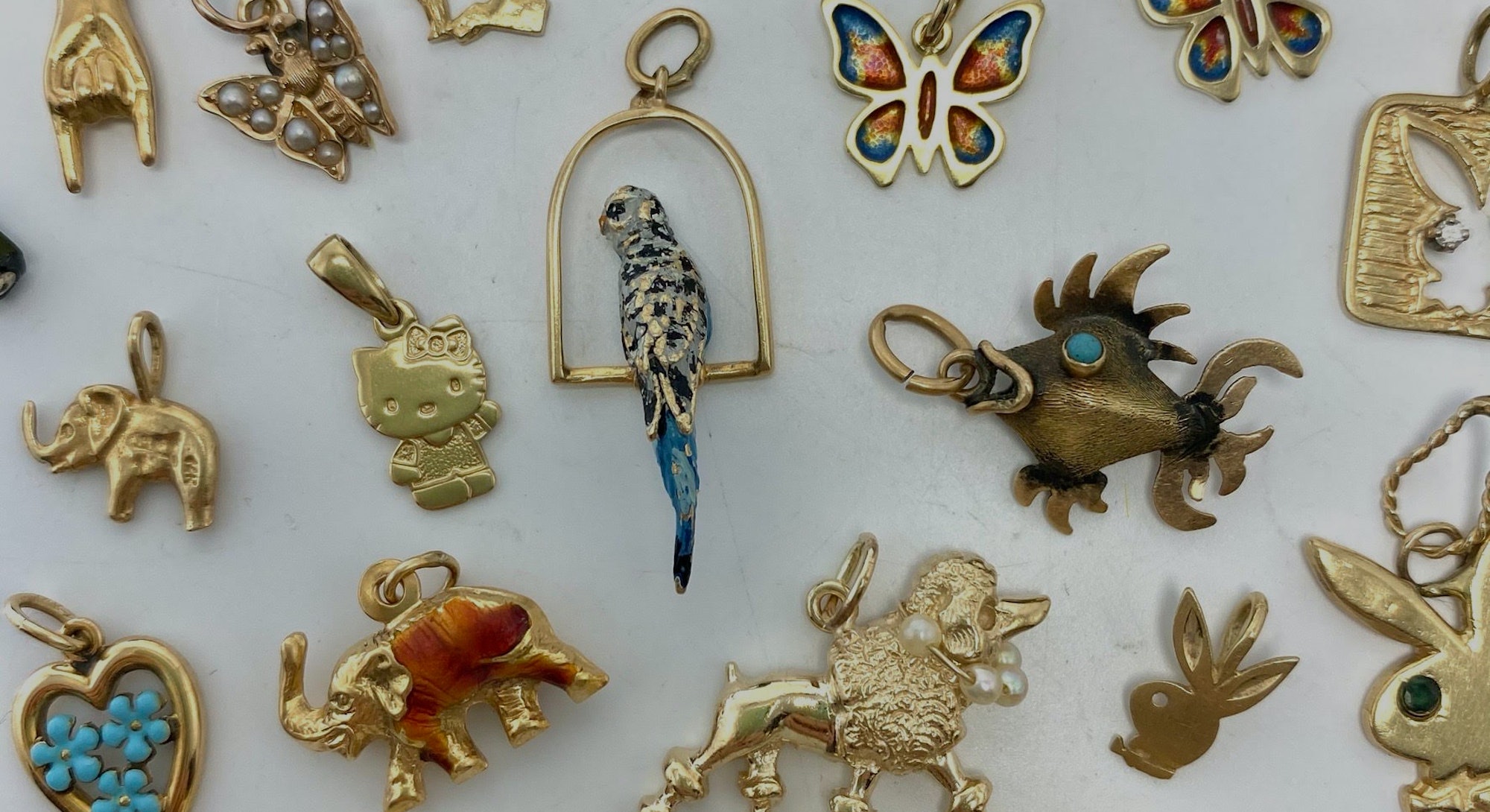 Gold, like a pair of sneakers, is essential to streetwear.

In the 1980s — the era when Nike launched its iconic Air Jordan 1 — chunky gold chains and rings added to funky outfits, and became a symbol of prosperity. Later in the '90s, gold silhouettes transitioned to slimmer, more dainty jewelry, eventually making way for the charm-frenzy that reigned over 2000s trends.

While fashion sees a resurgence in these decades, jewelry trends are adjusting to modern times. Gone are the silver mall-bought charm bracelets (shoutout to James Avery and Pandora) and chunky, diamond-encrusted chains of the '80s. Instead, shoppers are seeking unique, vintage pieces, and are ready to drop all kinds of cash for one-of-a-kind jewelry.

Like the sneaker resale market, these long-lasting pieces are seen as investments — but gold will always hold value, while the footwear game is more volatile, and profit isn’t guaranteed. Even throughout the pandemic, when luxury goods suffered, the gold market stayed "relatively resilient," according to National Jeweler. It credits flourishing sales to the extra cash consumers have with limited travel and dining out options. But the same limits apply to pawn shops, jewelers, and estate sales, where real gold jewelry can be found. As the demand for gold reaches its peak, where are consumers to go?

One place people are shopping is Instagram, where accounts have been turned into vintage gold marketplaces. There, herringbone chains from the '80s, costume jewelry from the '90s, and vintage charms dating back to the ‘70s can all be found. Accounts selling the pieces claim they’re all real gold, and their reasonable prices make vintage gold even more highly coveted. Now, Instagram seems to be harboring a gold rush of its own.

While apps like Depop and eBay have gained popularity as people were basically forced to online shop even more regularly since COVID-19 began to spread, buying clothing online is a much different story than investing in jewelry worth hundreds. There's a lot of trust involved in buying a piece from a random seller on the internet, especially for someone unfamiliar with gold. Authenticity, value, and background are all factors you have to verify. Buying on Instagram also requires some research on the account you’re shopping from — you don’t want to end up paying hundreds of dollars for a piece that never arrives.

But for a platform with a lot of loose ends, Instagram is quickly becoming a new kind of miscellaneous market — one where people can find clothes, shoes, art, and, of course, jewelry all in the same place. The social media aspect of the app has historically been used by sneakerheads to find even the most coveted kicks, and prices can sometimes be lower than popular resale apps. Funky handmade items, too, are thriving on Instagram, where sellers are able to create their own collections as curated as their feeds. Buyers simply have to follow seller’s accounts to be in the know.

Especially in the past year, many consumers have tried to be more conscious of their consumption and shop more sustainably. Now, jewelry is no exception. Vintage gold is second-hand, hard-to-find, and often one-of-a-kind, which makes it utterly irresistible to shoppers. Gold charms in particular are the most desired, since they carry the most character — sometimes literally, taking the shape of popular cartoon figurines.

Many people buy the charms as a reminder of childhood cartoons or favorite characters.

"Most of the pieces I’ve found are Disney-related," Tasha Mourad, owner of business and Instagram page @rarebird.jewelry, told Input in an interview. "I’ve also found a lot of Looney Tunes charms." Mourad, who began her gold business after buying turquoise and silver pieces from people on Instagram, says the charms are her best-selling items. "They’re about 60 to 70 percent of what I sell," she said. Mourad credits this to nostalgia, as many people buy the charms as a reminder of childhood cartoons or favorite characters.

And, as rare as these charms may seem, Mourad says they’re mainly what she finds on sourcing trips at pawn shops and estate sales. "Through the ‘70s and ‘90s, Disney released a bunch of gold character charms, because that’s when a lot of its original characters came out," she said. When out looking for new inventory, Mourad says she often stumbles upon cartoon character charms, with appearances from Mickey, Winnie the Pooh, the Tasmanian Devil, and her favorite, Tweety.

Like any good business owner, Mourad is aware of what her market wants. "Especially on Instagram, people are more interested in finding re-owned and vintage pieces because those are harder to come by," she said. "You can barely find brick-and-mortar stores that sell just vintage jewelry — most stores sell newly made-in-factory jewelry."

Unless you’re shopping on Instagram, of course, where accounts are turning their followers into customers. Mourad’s account boasts over 7,000 followers, which she keeps entertained with near-daily inventory updates and detailed pictures. With a full-time job, Mourad laments the limited amount of time she has to maintain and curate her Instagram business. But with vintage charms gaining popularity and hype, Mourad’s page has the potential to explode — nowadays, it would only take a post from a person with a huge following to bring attention to Mourad’s gold mine.

New York-based store New Top Jewelry has been able leverage Instagram to its advantage — like, 55,000 followers advantage — and is now in business with rappers, celebrities, and most importantly, my editor. Gold is a fast-growing market, and plenty of people are ready to invest.

Olivia Harris, on the other hand, found herself selling gold full-time — accidentally. Inspired by her grandmother, who was an antique dealer, Harris started selling vintage gold on Etsy in 2018. It wasn’t until January of 2020 that she transitioned to Instagram, where she noticed shopping was starting to become a trend. Now, her account @bigohbijoux is close to reaching 6,000 followers.

Shortly prior to the creation of her gold Instagram, Harris departed her full-time job as a creative director, with the intention of finding another position. For a moment, she considered making her gold business her main source of income, but opted against it as it was a financial risk. The pandemic’s arrival, however, made jobs scarce, and what began as a sheer idea was forced into reality.

"I would say over 90 percent of my sales come from Instagram," Harris told Input in an interview. "And half of the items I sell are charms." Like Mourad, Harris finds a lot of cartoon character charms, but says they sell best for reasons beyond nostalgia. "Charms are some of the least expensive gold pieces," she said. "And you can collect an infinite amount of them, since you can layer them on multiple necklaces."

Of course, it takes a trained eye to determine the authenticity and value of any given piece Harris or Mourad find. Not everything that glitters is gold. Harris, who said she finds pieces like Hello Kitty and Playboy charms, has to look out for non-licensed jewelry — which strangely enough, is still made out of real gold. "Since Playboy bunny and key charms are so popular, lots of real gold knockoffs were made," said Harris. "But there’s always something off about them." Harris’ gold standard is to look for real labels and watch out for fakes. She pays attention to how crisp the cast of the charm is, as well as how the stamp looks on the back.

With such attention to detail, it shouldn’t come as a surprise that Harris has seen an increase in sales since the pandemic started. With people not spending money on expensive clothes or trips, costly gold pieces are seen as investments. "Both men and women buy my charms," said Harris. "They’re a cool unisex item."

Harris sees charms as a personal way to express oneself, and like Mourad, enjoys the stories that come with them. Both of their adaptive jewelry stores are a mirror of a new generation of shoppers, looking for uncommon, individualistic pieces. And, much like their products, there’s a certain charm about these new businesses — they’re headed by owners just as passionate about gold as their customers.

This article was originally published on Feb. 10, 2021