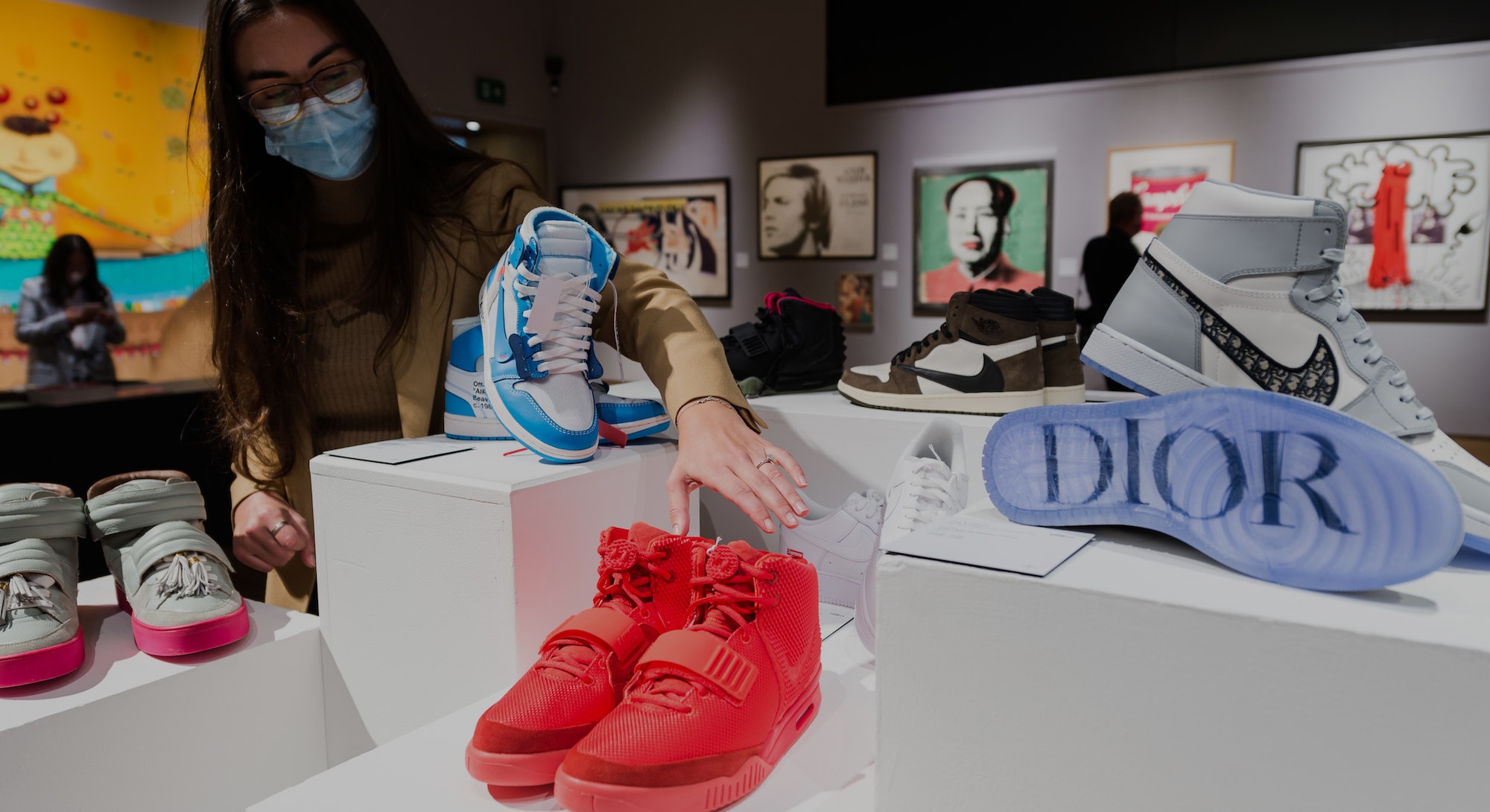 On October 6, 2010, long before smartphone photography became mainstream, Kevin Systrom and Mike Krieger launched the photo-sharing app Instagram. Within the first year, 10 million users signed up for it, in what would forever change the way we share pictures with friends, family, and random people on the internet.

Instagram was a hit thanks to its simple, image-focused user interface, which gave individuals an easy way to capture and show their surroundings to anyone who was willing to look. At first, it was sunsets and sandwiches, for the most part. But, along the way, Instagram turned into the place where people also wanted to flaunt whatever they were wearing on any given day, from high-fashion jackets and purses to the latest and most hyped footwear.

"It wasn't initially a place where we’d showcase our sneaker collections," Jazerai Allen-Lord, co-founder of the branding agency True To Size, says about the early days of Instagram. "Even though I worked in the industry and ran social for Kicks On Fire, my personal page was full of stuff about my family and my kids." But it didn't take long for that to change, as she recalls how nearly overnight Instagram started to take over certain subcultures, including streetwear.

About two years into her use of Instagram while running Kicks On Fire’s social media pages, Allen-Lord introduced herself as the voice behind that Twitter account, where she’d been actively creating and having sneaker conversations with people around the world. Once she shared her true identity, Allen-Lord's personal Instagram following went from 500 to 5,000 followers in two hours. Back then, she says, it was "very weird" to connect with others in the sneaker community, but Instagram changed how people interacted with those they didn't know before — it became personal. "The whole industry was on my Instagram like, "I can’t believe that you wear Keds. I can't believe that you didn't brush your son's hair,' all kinds of commentary."

Before Instagram started to become popular in different social circles, long-time sneaker enthusiast Mike Richardson talks about that era being reigned by sites like NikeTalk and Hypebeast. But it wasn't long before the sneaker community shifted its attention to the app. "I think the general trolling, rampant racist fuckery and posturing from folks on these forums helped make my exit succinct and final," he recalls. And although he attributes his current lack of enthusiasm for sneakers to simply growing out of them, Instagram is now where he gets the info and sense of community he needs when it comes to shoes — and there are likely thousands of sneakerheads who can relate to him.

“In forums, the anonymity allowed for greater acts of fuckery and cowardice.”

While Instagram hasn’t totally aced its community harassment standards, Richardson pointed out there’s less abuse on the app compared to NikeTalk or other niche forum sites. "Your IG profile is there to see and connect to you," he said. "In forums, the anonymity allowed for greater acts of fuckery and cowardice."

Once editor-in-chief of Slam Magazine and sneaker journalist Russ Bengston says, "Instagram just stands in as a meeting place for people with that same interest worldwide, in a way that allows you to check in daily.” Unlike the "if you know, you know" mentality of sneaker forums, or hanging around the local sneaker or skate shops before the rise of social media apps, Instagram gave streetwear a platform that has taken what was once a subculture into mainstream territory — and the app is, perhaps, one of the reasons why it's so difficult to buy pairs today. Everyone sees them, everyone wants them.

In the age of Instagram, buying, selling, and trading sneakers can be reduced to a hashtag. It's no longer just about wearing a fresh pair of Jordans to school or work office because they made people feel good, as the app has compartmentalized the need of sneakerheads to share unboxings or "flex" their latest pickup from the comfort of their bedroom. Instagram has, essentially, turned the sneaker game into an elitist game, and that's an idea purists don't appreciate.

Instagram's influence on streetwear goes deeper than pictures of people wearing highly coveted shoes, however. Soon after the launch of the app, brands, retailers, and media networks soon recognized the value of covering sneakers, but it took them some time to figure out how to fully take advantage of that. In 2014, Allen-Lord recalls the lack of strategy across the board. "I remember seeing [pictures of] the [Jordan 11] “Concord” over and over, and over, and over again, up and down the [Instagram] feed. The [Jordan] Gamma Blue 11 over and over, and over again," she said. Instagram was just full of product photos — no history, no cultural relevance of the actual shoes.

“Every woman that I'm close to, in sneakers, I met on social media.”

"There was this conversation in editorial around still needing to write [articles] and how we couldn't post everything on Instagram," Allen-Lord said about the approach to Instagram at the beginning from Kicks On Fire, a blog that focuses on sneakers. "There still needed to be a story for them to come to, and it got to this point where they gave up — like 'fuck it, let them have it.]" It was then that clickbait seemed to evolve into content for Likes on Instagram.

That thirst for approval, and the ultimate search for virality, on Instagram quickly took off. One day, DJ Khaled could be jumping in his pool with Yeezys on, another people would be damaging limited-edition shoes to spark a reaction from the rest of the community. Retailers, too, have since joined in on the fun, using Instagram to sell and raffle off sneakers, although their lottery-based systems are murky and it's never clear whether any actual humans ever win a chance to buy those pairs.

Throughout the years, as Instagram continued to grow to its more than 1 billion users today, so did sneaker culture and the business that came with it. Gone are the days when enthusiasts only had the option to buy the pairs they were looking for at retail stores such as Flight Club in New York City, or on eBay — now there are apps like GOAT, StockX, and even Instagram with its native shopping features.

As streetwear culture changes, Instagram changes, and vice versa. In 2016, when Instagram introduced Stories and its algorithm-based feed, it didn't take long for both sneakerheads and brands to try to figure out how to get the most out of people's attention. As everyone rushed to "hack" the algorithm, the homogeneous look we now view as Instagram-aesthetic started to develop. It’s phase two of what Allen-Lord referenced — the endless stream of product photos turned into slightly different iterations, each with a unique view into someone's perspective of sneakers.

“Now, sneakers are this status symbol for rich people.”

"It's always a light-skinned curly hair, racially ambiguous woman," says Jourdan Ash, writer, host of podcasts Dating In NYC and True To Us, about the marketing strategies from various sneaker brands. "She's usually in some kind of oversized clothes. She might be in a hood-adjacent setting or a city-adjacent setting, and she might sit on top of the car and look fake mean, or whatever." It’s this repetitive and predictable content that pushed her to establish her podcasts, because that is one of the perks of Instagram — if you don’t find it, you can build it. What started as a social edit test for a job interview process turned into an Instagram page and content series that highlight Black and brown women in the sneaker and streetwear industry, which often looks like a boys club and is frequently portrayed through the male gaze.

When she first started working with Kicks On Fire in 2007, before Instagram or Twitter, Allen-Lord remembers how difficult it was to find other women in the space. After running through the forums and her existing community, to no avail, she went as far as to post Craiglist ads in search of people who shared similar interests. "There was an excitement about finding each other," she said. "Every woman that I'm close to, in sneakers, I met on social media. So, it was a gift to celebrate finally having a space to like appreciate our art, style and find our community, but then that amplification of that style and that community it just got commodified and eaten up."

Over two decades into his love affair with sneakers, Mehul Patel talks about how bittersweet it is to see something you've been deeply passionate about become widely adopted in the blink of an eye. But, at the same time, he appreciates the impact Instagram made on sneakers globally. "My wife's family lives in India for the most part, and it’s gotten them into sneakers. When I would visit India in my 20s, I would be pretty much the only one with 'cool' sneakers on. Hell, you even see Bollywood stars have sneakers on at their weddings now," he said. "I’ve been a software engineer for almost a decade now, and you definitely see the shift even with how us nerds dress at Amazon."

Looking back at the old days of sneaker culture, Bengston says, "It was just a hobby for freaking weirdos. We were the dudes and girls, who would flip through their Sports Illustrated obsessing over a detail on a shoe Michael Jordan was wearing and recognizing, 'yo, that's not the same one we could buy.'" That element of discovery, and surprise, is largely gone with Instagram. As soon as a sneaker hits the internet, thousands of people know about it — and the race for them begins.

As anybody with a love of sneakers will tell you, shoes are the first thing they look at when meeting someone new. But, in 2020, what a particular pair says about someone has definitely changed, for better or worse: Wearing Nike SBs isn't the same today as it was before Instagram, because all people care about is the hype, showing off on a post for Likes, and not the story behind the actual silhouette. "Now, sneakers are this status symbol for rich people," Bengston says. "It's kind of insanity that the sneakers themselves haven't changed, but why people pay attention to them has."