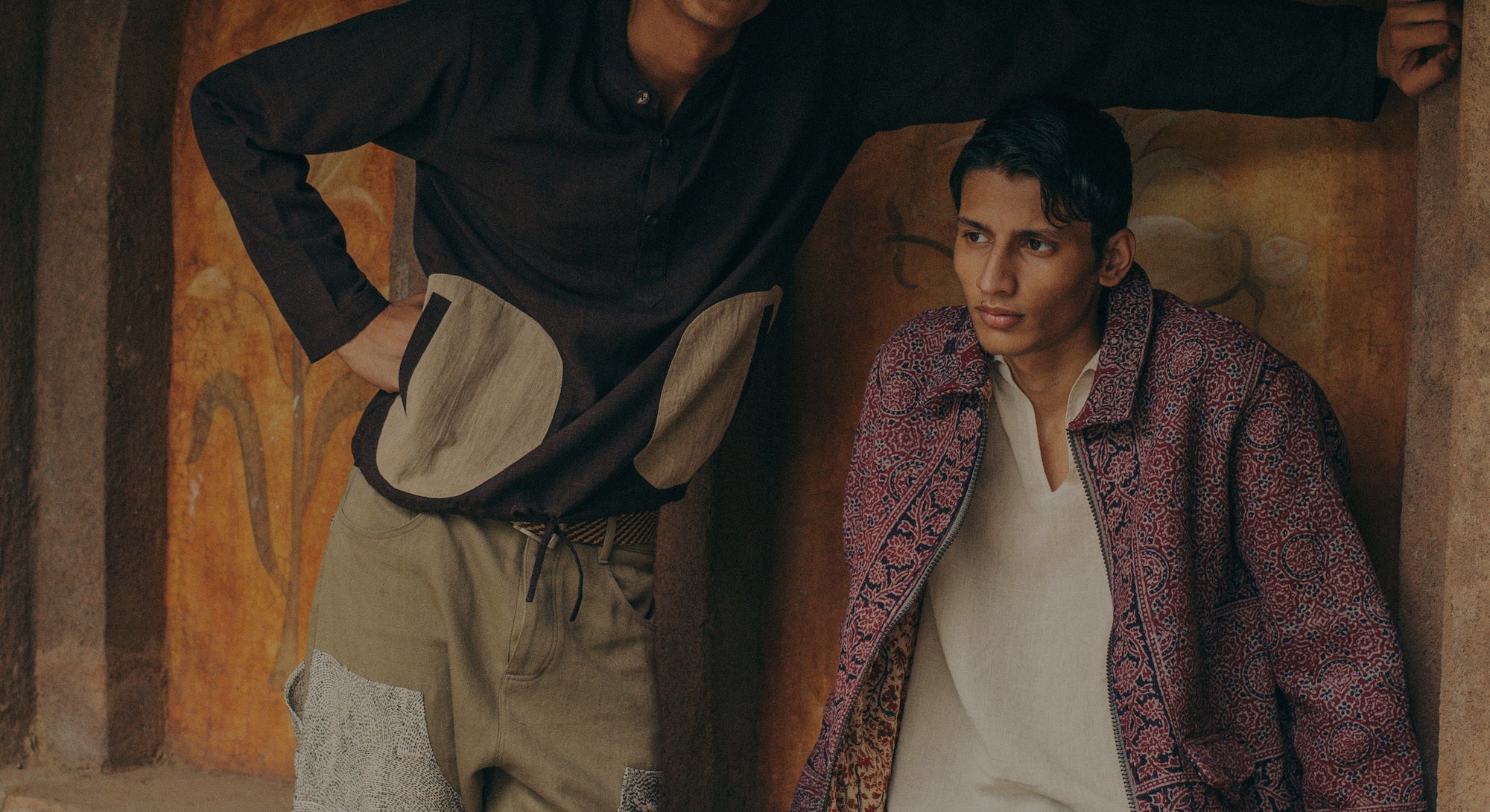 A new generation of South Asian menswear brands is reimagining textiles from the Indian subcontinent to create clothes that are both a nod to ancient ways and deeply modern.

Though long celebrated for their traditional craftsmanship and often hired by luxury brands, South Asian artisans have not attained the same recognition as the couturiers of Paris or the tailors of Savile Row.

But now, with a growing demand for transparency and handcraft in fashion — the ability to work with artisans without middlemen and the ease with which designers can sell directly to in-the-know international customers — South Asian menswear brands ZnAli, Karu Research, and Kardo are making traditional fashions new again.

“To preserve traditional craftsmanship, it is also important to challenge its potential.”

The longest-running and perhaps most accessible of these brands is Delhi-based Kardo, founded by Rikki Kher in 2013 and carried by some of the sharpest boutiques around the world. The child of Indian immigrants, Kher spent his childhood in his family’s London Sari shop, went to business school at NYU, and got into the corporate side of the fashion business. A sourcing job took him back to India, where he fell in love with the country’s seemingly endless variety of unique artisan textiles. “It was an incredible emotional reaction to being in the country of your parents’ birth,” he tells Input. After years of working for fast fashion brands and international corporations, he decided to strike out on his own and build a company that makes clothes slowly and responsibly.

Using vintage fabrics, Chikankari embroidery, and Khadi (the hand-loomed cotton once worn by Gandhi), Kardo keeps the cuts simple and puts the focus on the textiles themselves. Kher is particularly proud of his brand’s commitment to block printing, a technique dating back to at least the 12th century that requires fantastic patience and skill but produces beautifully variegated fabrics with a human touch. “Every single print they create is made in-house so the blocks are crafted from scratch,” he says.

To design these prints, Kardo partners with the Indian textile brand Anokhi, which has made efforts to keep this knowledge alive since 1970. “To preserve traditional craftsmanship, it is also important to challenge its potential — to keep finding ways to refresh and revitalize the approach to working with it,” Anokhi design director Rachel Bracken Singh says.

A standout block-printed piece from Kardo’s Spring/Summer ‘22 collection is a sumptuously patterned blue tracksuit with contrasting orange stripes running down the legs and sleeves. Made from naturally dyed cotton rather than black, elasticated polyester blends, this two piece trackie is as equally at home in the streets of East London as it is in New Delhi.

“Using an appealing, contemporary code of style that is retro-inspired and street savvy, the time is proving ripe for merging the best of east and west,” says Ekta Rajani, an Indian stylist and slow fashion expert. “As an alternative to the hyper-industrial Western model” in India, “mens clothing is getting more dynamic.” For Rajani, this turn toward Indian textile heritage signals a broader “shift of attitude and pride,” among South Asian designers and consumers who are finding a renewed appreciation for fashion traditions that had long been viewed as out of date.

As of the past few years, more menswear brands from South Asia are starting to find a global audience. Kartik Kumra began his brand Karu Research just two years ago from a bedroom in his parents’ Delhi home. He was halfway through an economics degree at the University of Pennsylvania, but he suddenly found himself stuck at home in lockdown. Kumra was a longtime admirer of niche Japanese brands like Kapital and Visvim and sensed a similarity between wabi-sabi-style boro, and overdyed and embroidered Indian textiles like Kantha. Faced with the prospect of completing a digital internship at a U.S. firm late at night, he decided to commit full-time to designing clothes.

“I just didn't see Indian clothes in stores,” Kumra says. “And not like Indian silhouettes traditionally, just anything representing India. So I was like, ‘Okay, there's definitely room for this.’”

Without a driver's license, Kumra convinced his mom to chauffeur him to towns in nearby Uttar Pradesh and the city of Jaipur to meet local textile artisans. To buy their vintage fabrics, he used money he had saved up from flipping Supreme goods. At night, he watched YouTube videos on sewing and experimented with one-off creations. The biggest difficulty, however, was convincing artisans to depart from their usual ways of doing business. Unlike his classmates at Penn, he says: “Artisans aren’t only motivated by money. It’s very strange, because it's a sector where people need money.”

When Kumra began selling his pieces on Instagram, the response was far bigger and more immediate than he’d anticipated. Two years later, he is working with about 40 artisans and a team of tailors. This month, Karu Research is releasing a 17-piece summer capsule exclusively through Mr. Porter, which already carries the brand’s main line. “Karu’s focus on quality, provenance and individuality of pieces, [and] the seamless melding of workwear and age-old Indian craft techniques is what makes Karu so interesting and why it has had such instant success on Mr. Porter,” says Sammy Skipper, junior casualwear buyer for Mr. Porter.

The handmade and highly variable nature of each piece (especially the ones made from deadstock or recycled fabrics) will appeal to those who have outgrown their old hypebeast gear but are still looking for things that nobody else will ever be able to copy. Kumra’s careful sourcing policies — he uses natural dyes and directly contracts with each artisan to ensure they’re paid a fair price — ensure that Karu Research only puts out clothes of the highest quality. “I [quality control] every piece myself,” he says. This approach doesn’t lend itself to an economy of scale, but for Kumra, that was never the goal. Instead, he aims to “create a community where people every season want that product.”

For people who are looking for clothes that are even more far out, there’s Zain Ali, the designer and namesake behind London-based ZnAli. Like Kumra, Ali launched his brand during the pandemic and used the opportunity to set up shop in Lahore, in Pakistan’s Punjab province. For inspiration, Ali looked at the clothes worn by his Pakistani parents and grandparents in old photographs. This was an era when the country was still on the hippie trail, and young people were mixing traditional fabrics and patterns with groovy Western styles as a kind of “Pakistani nostalgia.”

Lace shirts and floral crochet flares reminiscent of Bode show a softer side to South Asian masculinity. There is an intimacy and vulnerability to the way Ali styles and shoots his models, all of whom are friends of his. Most of his clients, however, live in New York rather than Lahore, communicating with Ali about the provenance of fabrics or particularities of fit over email — a service he is expanding into full-on, made-to-measure. Ali aims to welcome them into his brand and culture without claiming to speak for others. “I'm not trying to communicate this national identity,” he says.

The question of how to translate traditions from one culture to another is something Ali continues to wrestle with, especially when he feels pressured to sell an essentialized vision of India and Pakistan. He recalls a PR agency once telling him to “talk about the bazaars and the smell of the spices” in a pitch meeting but felt that wasn’t the way he wanted to build his brand or connect with an audience. “I want South Asian designers to hold on to their distinct selves,” he says.

Ultimately, Ali hopes the new brands coming out of South Asia will be judged the same way brands from anywhere else in the world are — by their own aesthetic and conceptual merits. It may take a few years for the rest of the world to catch on to the fantastic fashion coming out of India and Pakistan, but he’d rather it happen organically than forcing it. The clothes speak for themselves.