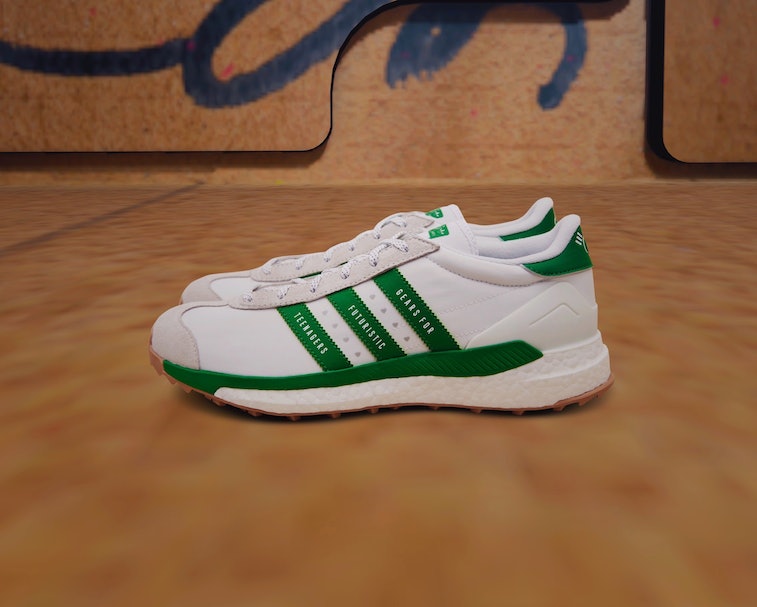 Human Made, the brand of Nigo’s focus post-Bape, is continuing its partnership with Adidas by releasing a capsule full of steezy dad goods. Highlighting the assortment are two shoes so dorky they’re cool, the Forum Low and Country. Whether you call ’em normcore or dadcore, both are old-school sneakers given new life under Human Made’s mission to make “Gears for Futuristic Teenagers.”

Human Made’s Forum Low is much tamer than the Bad Bunny collaboration Adidas just released, using color sparingly with the brand’s heart graphic on the sneakers’ lateral side. The green and purple / yellow versions are predominantly white, while the red variant makes use of a cream upper. On all three, you’ll find “Gears for Futuristic Teenagers” emblazoned on the heel stabilizer.

The Country, which dates back to 1970 and has been upgraded with Boost cushioning, will come in the same three color schemes as the Forum Low. It has serious notes of the Pro Model, the plain to a fault but super reliable basketball sneaker, and spells out Human Made’s mantra across the three stripes. As far as dad shoes go, you can’t get much better than this collaborative Country.

How about a tracksuit to match? — To coincide with the kicks, Adidas and Human Made will also release three reversible tracksuits. One side channels Adidas’ classic tracksuits with three stripes and minimal branding, while the other invokes Japanese souvenir jackets with a trophy graphic on the pack, two-tone color blocking, and “slashing” pockets.

Completing the look will be a trio of T-shirts with the same trophy graphic, as well as socks and wristbands with branding from Human Made and Adidas. If you wear the entire kit, you’ll look like the steeziest offspring of Chas Tenenbaum.

Suit up later this month — Human Made’s latest Adidas capsule is slated to release April 24 through Adidas’ website and select retailers. The good news is that many of Human Made’s Adidas collabs have ended up sitting on shelves and even going on discount, so you shouldn’t have a hard time copping if the dad kit speaks to you.

This article was originally published on April 13, 2021