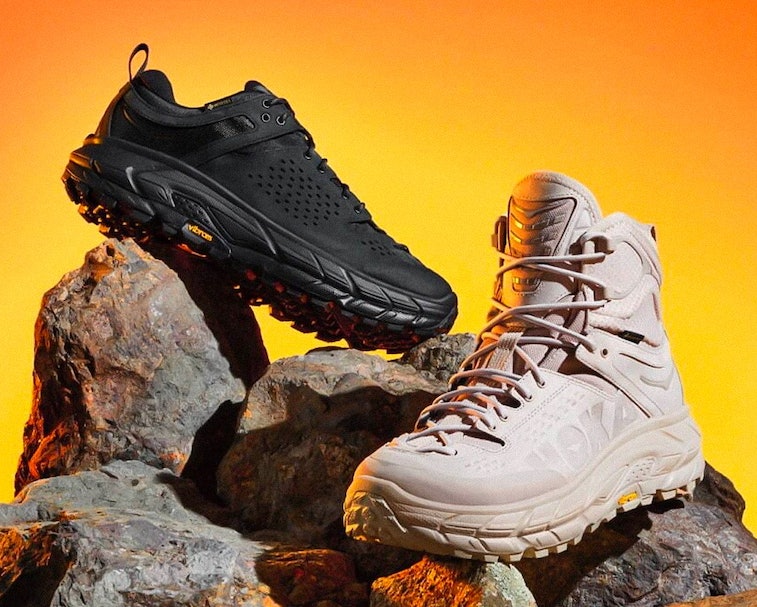 Hoka’s trail-ready footwear may look intimidating, but its Tor Ultra shoes are 18 ounces of pure performance. The brand has built a cult following for its cushioned-to-perfection running sneakers and hiking boots, but the Tor Ultra, originally a collab from Engineered Garments in 2018, is a true trail grail.

While a couple of general releases have sprung from its 2018 debut, few can get ahold of a pair without paying extreme markups. Now, just in time for the colder weather, Hoka One One is rereleasing the kicks in both high and low versions. The shoes have most of the same DNA as their 2018 counterparts but get a slew of fine-tuned upgrades.

Instead of the original eVent lining, Gore-Tex lining takes its place for an added layer of protection against the elements. The outsole is equipped with Vibram Megagrip, a grippy rubber compound with strength comparable to steel that offers traction on all terrains. Whether you’re stepping through a slippery mud field or caught in a rainstorm, the Tor Ultra will keep you dry and standing.

Two is better than one — Each shoe is presented in an all-black and all-beige color scheme. The higher boot features the chunky sole, soft upper, and extra panels that secure the heel to ankle. An elongated lacing system runs from toe to collar, should you need a more snug fit. Its low-top brother is similarly constructed with the bulky outsole and an upper fitted with full-grain leather and textiles. “Hoka” is imprinted into the fabric for a minimal hit of branding.

As is the case for many Hoka productions, the shoes look heavy. But as the outdoor imprint knows, the key to a successful trek is proper shoes that don’t weigh you down. The Tor Ultra Hi comes in at just 18.4 ounces, while the the Lo is 16.7 ounces. Both both rank high on Hoka’s cushioning scale, as comfort is just what the brand does best.

Hoka’s urban trail kicks are labeled as “all-gender” footwear, and at the time of writing, only a few sizes are left on the brand’s site. Otherwise, you can still find them on other stockists such as Bodega. For a shoe this special, you’re going to have to put some work in.