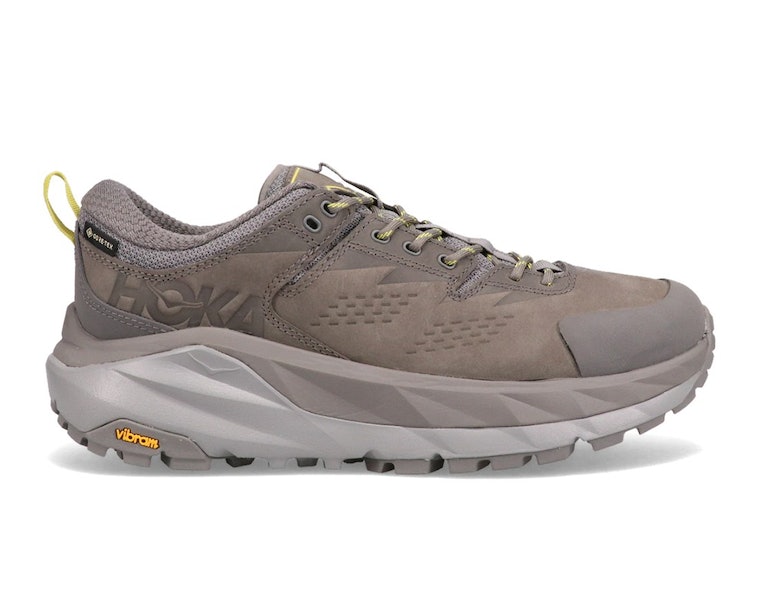 Hoka One One cut the top off one of its beefiest hiking boots.

The "Kaha" Gore-Tex, a waterproof boot with an ultra-grippy Vibram sole, is now available as only slightly less of a tank. As a proper sneaker, the new Kaha Low provides the same ruggedness with a greater range of motion. Consider the hiking sneaker apt for the treacherousness of winter in the city or a trail run, while the boot is more suitable for a proper romp into the mountains.

Hiking was a major trend for both clothing and sneakers in 2020, even if just for the sake of appearances. Some shoes like Salehe Bembury's New Balance 2002R merely took visual cues from the outdoors, while others like Snow Peak's Niobium Concept 1 (another NB collab) and Nike ACG's many offerings just so happened to be trendy for their utility. These new kicks from Hoka One One fall into the latter camp, but you can get good use out of them this winter without breathing in fresh air.

Same same but different — Hoka One One's latest hiking sneaker utilizes the exact same construction and materials as its preceding boot, only with an ankle-length cut.

Inside the Nubuck upper with an abrasion rubber toe cap is a Gore-Tex bootie to provide full waterproofing. The midsole is made up of two layers, an EVA foam for comfort with a rubberized foam underneath to add durable cushioning and a supportive base.

More than anything, Hoka One One is known for its hulking soles — and anyone who's ever worn them can attest to just how comfy and stable they are. Beneath it all is a "megagrip" high-traction outsole with 5 mm lugs from Vibram, which provides the tread for just about any hiking shoe worth mentioning. And despite its toughness, the Kaha Low comes in at 15.8 oz.

Scoop up your own tanks now — For its launch, the Kaha Low comes in two tonal color schemes that you won't mind roughing up. The "Charcoal Grey" version mixes earth tones, while another features several shades of black. Both are available now through Hoka One One's website, where they'll run you $200 ($20 cheaper than the boots).

If you're one of those sneakerheads who stays true to your habit in the winter, you can pick up the Kaha Low to avoid looking like one of the dopes in Bill Cunningham's iconic "blizzard" photo essay.