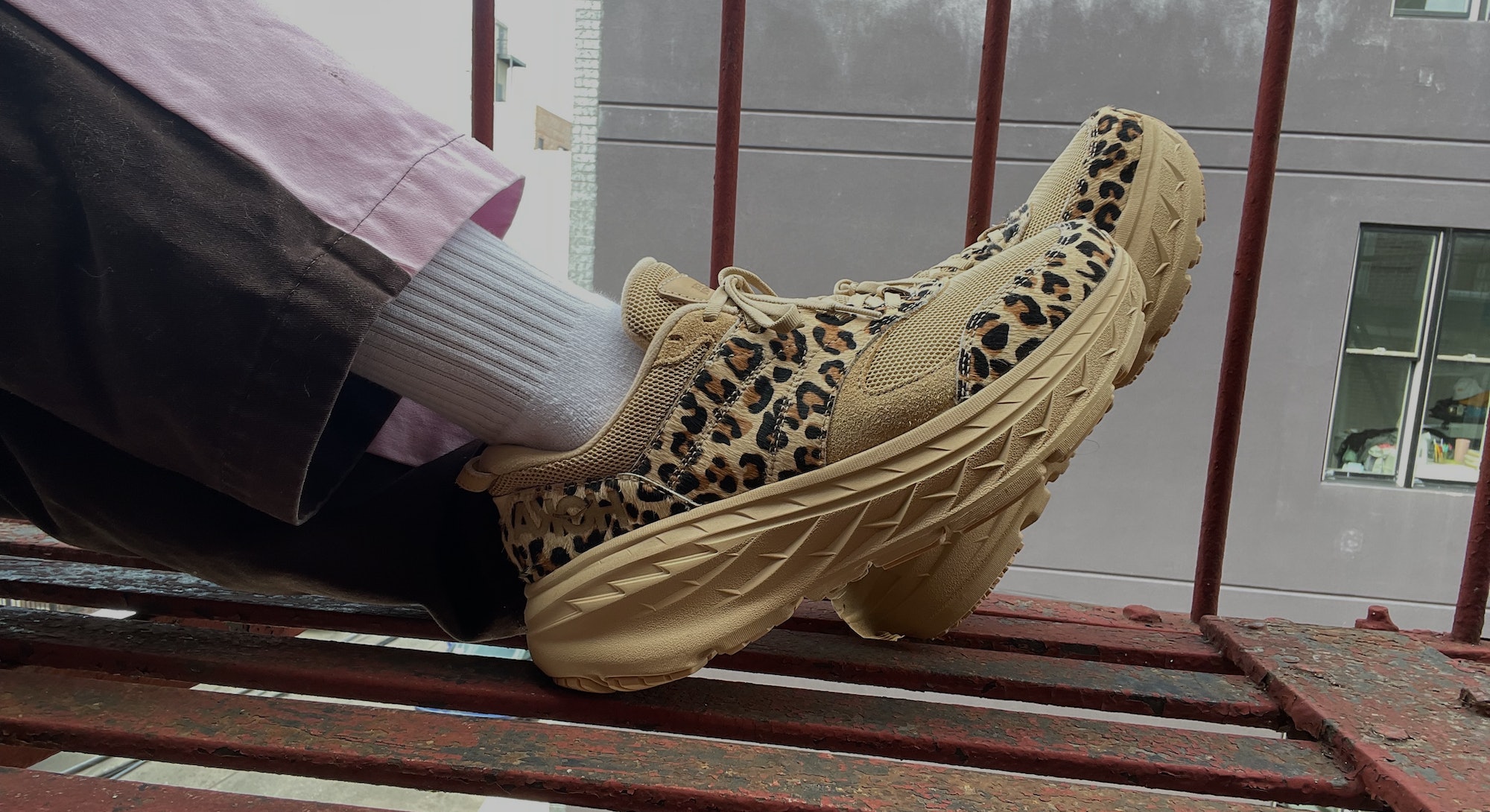 Both Hoka One One and Engineered Garments are brands with dedicated followings, the former with hardcore runners and the latter with menswear enthusiasts less concerned with streetwear. Both are nerdy groups, likely to pore over materials or the precise millimeter drop of a sneaker from heel to toe — which makes the brands natural partners.

For its latest collaboration, EG decided to treat Hoka One One’s Bondi L like one of its boots. The more lifestyle-oriented sneaker, which is a less technical version of the Bondi road running series, was treated to premium materials in calf hair and suede along with fanciful croc and leopard prints by the hand of the Nepenthes-owned brand operating out of New York City.

Only the two other sneakers, which were done up in all-black and tonal beige, could be spared from being labeled as utterly ridiculous — but that’s what makes the collaborative release such a delight. And after wearing the leopard print version for several weeks, I can confidently say EG’s Bondi L is one of the best sneakers of the year.

Support but make it fashion

Hoka One One is primarily known for its soles, which range from beefy to downright comical in a bid for stability on steep trails. They’re thick as hell and extremely supportive for just walking in, but you couldn’t call the sneakers out and out stylish. By focusing on function to a fault, Hoka has been adopted by some stylish folks as part of a dad-fetishizing trend that transforms what would otherwise be dorky into a choice that insincerely suggests its wearer isn’t concerned about what they wear.

Despite fitting well into the dad shoe trend, finding an acceptable sneaker for everyday wear from Hoka One One can still be difficult. Few of the color schemes look good anywhere but running even when worn cheekily, which is why I was so excited about another collaboration, with Thisisisneverthat, earlier this year.

These sneakers are so out of this world

Unlike that collaboration with the Korean brand, Engineered Garments doesn’t bother with making any connection to exercise. No one’s going to wear leopard-print calf hair while running — they want it to show out as part of a coordinated outfit. And show out, these sneakers do.

Because I have alignment issues caused by terrible posture, having a sneaker that’s as supportive as it is opulent is my version of having my cake and eating it, too. My Thisisneverthat Hokas have become my beaters, but the EG sneakers are now the shoe I bust out when I want to show off. Other sneakerheads might turn to the latest Off-White or Travis Scott collab for such an occasion, but the fact that these sneakers are so out of this world is another major component of the appeal.

All four of the shoes released by the two brands last month are still widely available, freed from the hype that makes too many other releases impossible to secure. And because the EG Hokas haven’t been seen on Instagram a million times already, I’ve had numerous people enquire as to what the hell I’m wearing. When you’re fatigued by the current sneaker landscape, it’s a novel and welcomed feeling to rock something people are less hip to — but instead of hoarding this information to myself, I want to enlighten others on the path to attractive sneakers without any of the fuss.

So far, these leopard print kicks have been surprisingly versatile. I’ve worn them with black jeans, pink and brown color-blocked trousers, and bright orange hiking shorts all with success. I wouldn’t wear them in place of a more formal shoe, but they hold up just as well with smart pants as what I’d wear to the grocery store or park.

It turns out that you don’t need a hyped designer to make the perfect sneaker. Just give me ultra-light EVA foam with 4.0 mm of drop, a print to match my most ostentatious winter jacket, and a shaggy material that feels great to touch.