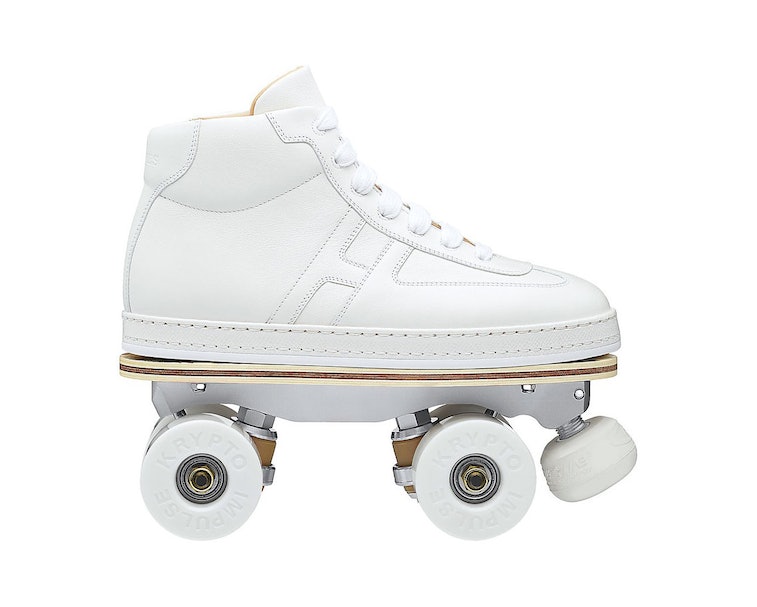 When it comes to accessories, Hermès may just be the Supreme of the luxury world. But instead of partnering with a range of companies with no discernible connection, the French purveyor of leather goods cooks up its own outlandish totems in house. Would you like an Hermès magnifying glass? That'll be $1,875... or only $510 if you don't need a balancing display. Or if you want something significantly rarer, how about the Hermès basketball, which retailed for $12,900 in 2013? Good luck finding it, as only two were made.

Now entering into this world of Hermès oddities are the Savana Dance Roller Skates, which can also be taken apart to wear as sneakers. At $4,450, perhaps you can consider it less exorbitant by thinking of it as $2,225 for a sneaker and $2,225 for a roller skate. That's just spending wise for multi-purpose footwear, isn't it?

A fairly simple hightop — The frills come primarily from its price tag and flexibility, as the shoe itself is an all-white hightop made of calfskin leather. A subtle "H" can be seen in the upper, the rest of which features only tight stitching for its simple components.

To transform into a roller skate, an attachment system within the sole connects to the wheel platform. Atop this platform is a tropical print that'll rarely be seen, but that's not even close to the most ridiculous thing about a $4,450 two-in-one roller skate. Down low are some Kryptonics Impulse wheels, which can be bought on their own for less than $10. But if you were looking for the best roller skates for, you know, actually skating, you wouldn't be turning to Hermès would you?

Where would you wear them? — Hermès' product page for the Savana skates suggests "skating through the town or strolling by the sea," but that doesn't sound ambitious enough. These bad boys deserve to be shown off, which is why they should be worn at a proper roller disco. There, you'll have the time of your life trying your best not to scuff them up. Ahhh, luxury.