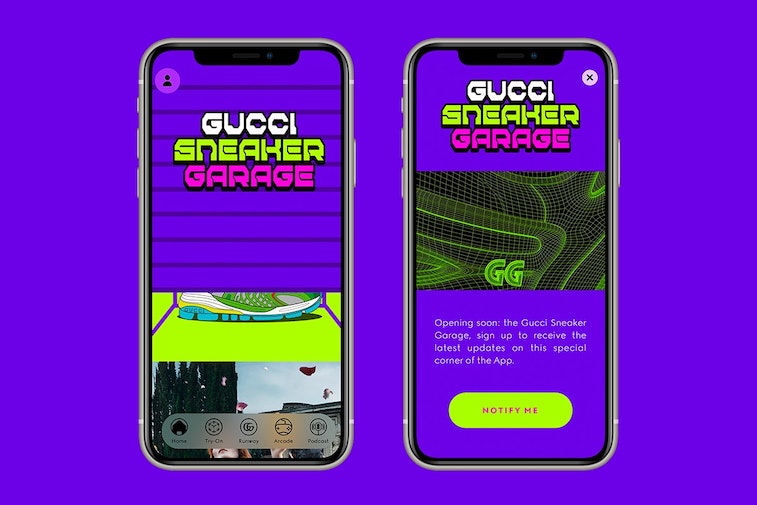 Gucci has announced a new sneaker-focused section on its app that'll have nothing to do with real, physical shoes. The Gucci Sneaker Garage, which will launch in September inside its existing app, is a weird, probably needless digital experience involving shoes that don't actually exist.

Users will be able to create their own digital sneaker based on parts of existing models, and creative director Alessandro Michele has designed his "first-ever virtual sneaker" for the app. Either of these pairs can then be "tried on" by users with augmented reality or put onto an avatar that'll seemingly only exist within the app. Gucci has said nothing about these digital sneakers carrying over to real life, so the question is who really wants this?

Maybe it's fun if you can't afford Gucci? — Gucci surely spent oodles of money on the upcoming section for its app, and it'll amount to nothing more than branding. Personally, there's nothing that exciting about creating a sneaker that'll never come to life or trying on a pair from Michele that'll stay within the app. Even when I play around with Nike By You's customization features with no intention to buy, at least there's the knowledge that my designs could arrive on my doorstep if I wanted them to. But what's the fun in playing with pretend sneakers?

"Through this interactive and trailblazer entertainment, Gucci involves its enthusiasts in a new dimension with the products and codes of the House, allowing users to bring their self-expression to post-physical and unexplored territories," Gucci said in a press release.

That's probably overstating the impact of a new feature for an app that currently has 355 ratings on the iOS App Store. While it makes sense to focus on digital experiences in a COVID-19 landscape, the Gucci Sneaker Garage is mere fantasy from a brand that's already nothing but an aspiration for most people. Perhaps this is a way for those who can't afford Gucci to engage with the brand further, but the more likely result is virtual crickets.

On the off chance that you do find this an exciting development, you can get the Gucci app on iOS and Android and await the new update.