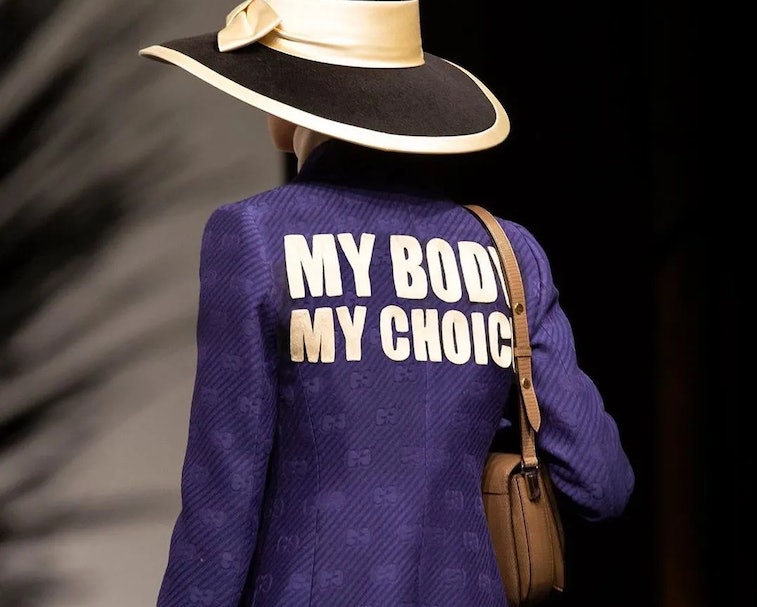 In light of the leaked Supreme Court document that threatens the abolition of Roe v. Wade — and subsequently, a woman’s right to pursue an abortion — Gucci has announced it will expense travel for any U.S. employee who needs access to health care not available in their home state.

“A fundamental human right” — The fashion label issued a statement on May 8, writing that it “remains steadfast in its belief that access to reproductive health care is a fundamental human right.” It is for that reason the company will provide travel reimbursement to employees seeking abortions (if the service is unavailable in their home state). Additionally, through its nonprofit organization Chime for Change, Gucci will support partner organizations that “enable access to reproductive health and protect human rights, especially for the most vulnerable.”

Since its inception in 2013, Chime for Change has aimed to “inspire participation in a collective community, bringing people together across borders, and generations to unite in the fight for gender equality.” In less than a decade, the organization has raised over $19 million to support various gender equity projects in 89 countries, helping over 630,000 women and girls worldwide.

Creative director Alessandro Michele has also made his stance clear on reproductive justice: In 2019, he debuted a 97-piece Cruise collection which featured blazers embellished with the words “my body, my choice,” dresses decorated with sequined ovaries, and capes donning the graphic “22/05/1978,” the date Italy officially decriminalized abortion.

Others take a stance — Gucci joins businesses like Levi Strauss & Co. and Amazon in offering support for its employees amid the uncertain future of Roe v. Wade. Last week, both companies announced they too would reimburse healthcare-related travel expenses for services not available in employees’ home states, including those related to reproductive health care and abortion.

“Given what is at stake, business leaders need to make their voices heard and act to protect the health and well-being of [their] employees,” Levi’s’ statement concluded, urging other companies to follow suit. As the Supreme Court settles on an official ruling, we can only hope additional brands will safeguard their employees and their right to bodily autonomy — although it should go without saying that such power should be left to people themselves rather than corporations or courts.