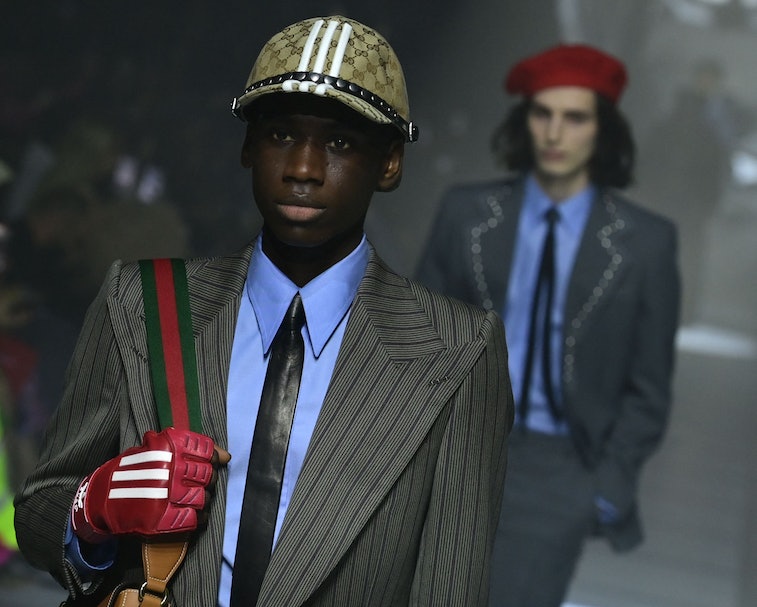 The Italian fashion house debuted its first collaboration with the sportswear giant today at Milan Fashion Week. While there’s plenty of room later for the conversation about whether we need another linkup of two apparel titans, our more immediate reaction is that this collab is already significantly better than what Adidas has done with Prada.

Multiple high-end looks were sent down the runway, including dual-branded blazers, overcoats, knitwear, and a whole host of accessories. It’s all decadent stuff, more in the style of Gucci than Adidas and akin to the non-gorp goods released as part of the house’s recent collab with The North Face. The only real element from Adidas’s wheelhouse — besides the stripes and Trefoil logo, of course — is an elevated cropped track jacket that looks straight out of The Jetsons.

There’s some truly bizarre headware, too — Gucci and Adidas’ accessories include leather bags and gloves with a prominent three stripes, as well as an abundance of hats that range from luxe normcore to outright spectacles. Strangest of all, perhaps, is what can best be described as a knit swim cap — and we’re not sure you can say the risk has paid off.

While Gucci debuted the looks on the runway, Adidas began teasing the collaboration through its social channels and the Confirmed app. Both the Twitter and Instagram pages for Adidas Original feature a yellow and maroon Gucci x Adidas mashup logo as their profile pics, and an Instagram post shows additional zoomed-in shots of some of the goods.

To keep tabs on the pending collaboration, you can sign up for email notifications through the Confirmed app. But no matter how long it might take for the release date to come, the chances of any of us having the funds to purchase should be scant.