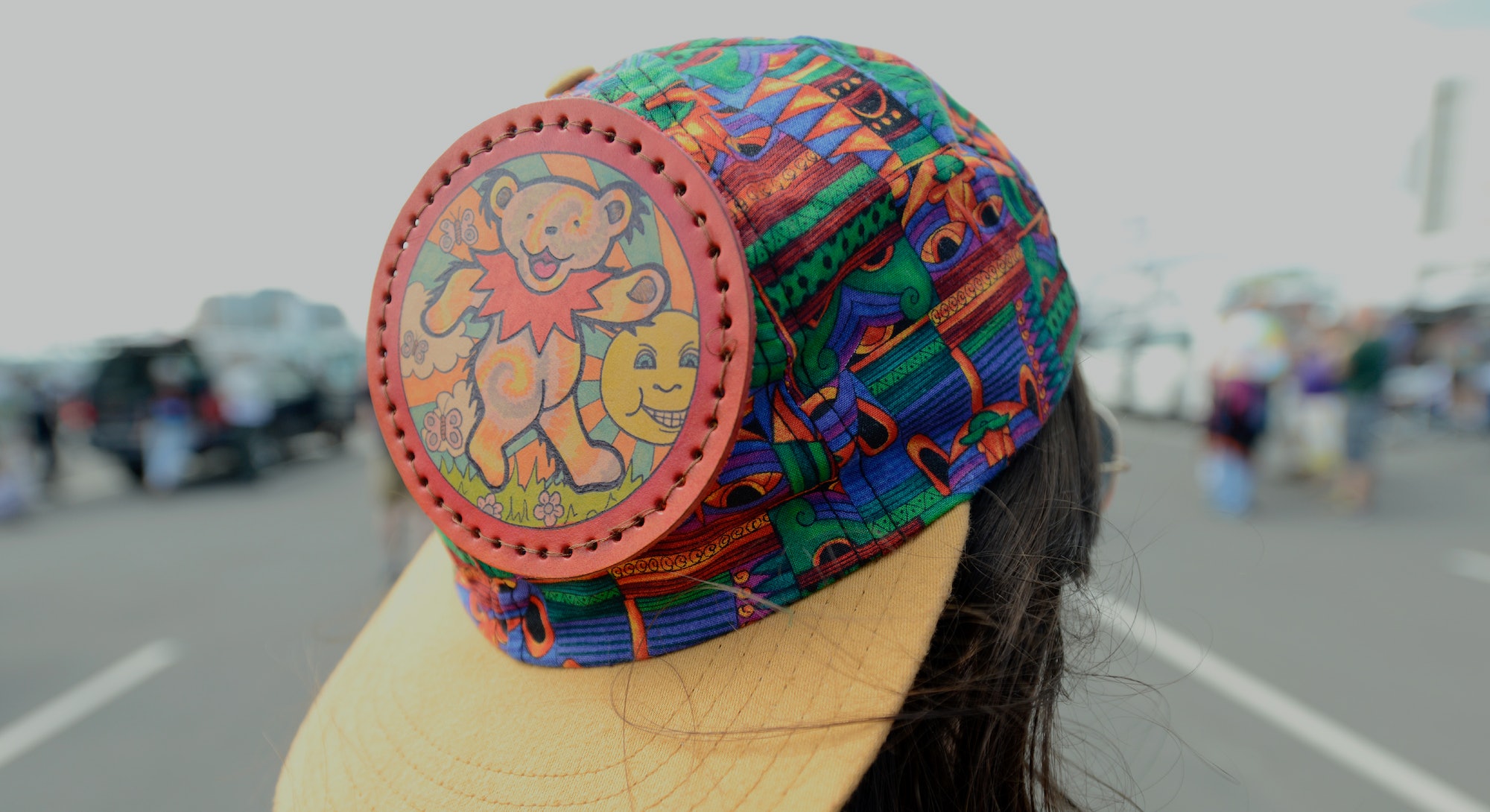 But how did the iconography of a decades-old jam band with a devoted cult-like following end up on Nike sneakers and Chinatown Market hoodies?

Word has it going to a Grateful Dead show was more than just seeing a concert — it was an immersive experience. Fans used to arrive hours early to hang out in the parking lot, where they would tailgate and socialize with other “Deadheads,” die-hard Grateful Dead fans. Referred to as Shakedown Street, mirroring the title of the band’s 1978 studio album, the vending area was filled with people selling homemade T-shirts, vegetarian food, jewelry, and more. These Deadheads would often use their profits to pay for gas and tickets to continue following the band around the country.

In the 1980s, there were various vendors who turned their high-quality bootleg tie-dye shirts into small businesses, including Martin Leffer of Not Fade Away Graphics Inc., Jonathan Marks of Grateful Graphics, and Tom Stack of Club Dead. Eventually, the Grateful Dead began hiring them to create officially licensed merchandise.

“We were all friends,” said Greg Burbank, who has produced official merchandise since 1987 with Liquid Blue and then Sunshine Joy. “Even though we were competition, we would help each other out.”

“It all has a backstory. Everything has meaning.”

In 2006, the Grateful Dead signed a licensing deal with Rhino Entertainment, allowing the Warner Music Group subsidiary to handle all the band’s merchandising and music releases. Mark Pinkus, Rhino’s president, has run the band’s business for the last 10 years, skyrocketing the brand’s popularity and introducing the band to a wider audience. Pinkus, who attended his first of 73 Dead shows when he was 17, earned the band’s trust by offering to sing any of their songs on the spot and impressing them with the first lines of the deep cut, “Victim or the Crime.”

“To work closely with the Grateful Dead, it really helps to understand the music,” Pinkus told Input. “And I absolutely love it.” One of Rhino’s primary goals is to introduce the jam band to younger generations, but having a Deadhead in charge of licensing means authenticity is the most important factor when approving deals.

Pinkus says Rhino has a style guide with all of the Dead’s trademarked iconography and gives licensees a fair amount of leeway when coming up with designs. However, in order for products to be approved, Pinkus, David Lemieux (the band’s archivist), and Bernie Cahill (the band’s manager) determine whether the designs “ring true.” They reject designs that paint the Dead’s skeleton symbols as “dark” or “demonic” or otherwise don’t represent the celebratory, positive nature of the band. These standards remain strict, no matter how big the collaborating brand may be.

One reason the Dead’s branding is so strong is their visuals. With symbols as recognizable as the dancing bears and the Steal Your Face lightning skull, there’s no need for the Dead to even put their name on merchandise. However, these symbols are more than just designs — they’re part of a deep-rooted, immersive Grateful Dead universe.

“It all has a backstory,” Burbank said. “Everything has meaning.”

Recently, the Dead has collaborated with companies like Crocs, Teton Gravity Research, and Nike, producing everything from sneakers to skis. But with a fan base as vast and dedicated as the Dead’s, it’s hard to please everyone.

Many Deadheads felt betrayed by the Nike SB Dunk Low Grateful Dead shoes, which sold out in seconds and are now listed for over $1,000 on eBay. Even if they wanted them, it would be nearly impossible for some of the band’s most hardcore fans to obtain the fuzzy, bear-clad sneakers because of the limited availability and high-price resale culture. Some Deadheads feel that simply working with large corporations inherently goes against the band’s ethos.

“A lot of people have this view of the Grateful Dead that they were communists, all about peace and love,” said Burbank. “But back in the '60s, they were the money band. They were smart business people.”

“This guy couldn’t name one song.”

Similarly, the Grateful Dead’s Instagram posts promoting collaborations with Chinatown Market are littered with comments attempting to gatekeep the band’s music. “What’s up with this hypebeast bullshit?” writes one user, while another simply says, “Posers.” When the band’s account posted a photo of LeBron James sporting the Chinatown Market print hoodie and nylon shorts, followers commented, “We don’t want him” and, “This guy couldn’t name one song.” One Deadhead on Facebook called it “blasphemy,” even going as far as likening James’ outfit to cultural appropriation.

Other Deadheads, however, are thrilled to see their favorite band remain relevant. “It pisses off some original Heads because it’s ‘mainstream,’” said Todd Watson, who has been to hundreds of Dead shows since 1978. “But I love seeing the Dead any time, anywhere. LeBron wearing the dancing bears? So cool!”

It’s not just LeBron. Celebrities from Jonah Hill to A$AP Rocky to Ashlee Simpson have been spotted rocking Dead merch. In recent years, the band has been everywhere, namely due to an uptick in commercial presence following the Dead’s 50th anniversary.

The Detroit Red Wings celebrate an annual “Grateful Dead Night”, Peloton brought them on for an “Artist Series” and the dancing bears and Steal Your Face logo are dominating high-fashion runways. The band is in Urban Outfitters, Old Navy, and Pac Sun, while vintage bootleg tees sell for upwards of $150 on sites like Grailed and Depop. Blending hippie-wear with streetwear, the band is largely responsible for bringing tie-dye into the mainstream.

Grateful Dead's brand is so big that it has completely transcended music. Decades ago, the Dead’s fan base was a niche counterculture; now the band operates like a major corporation. But expanding the Dead’s audience while staying true to its famous cult-like following is a difficult balance. As it broadens its licensing, the band continues to cater to original fans with classic tees from veteran companies like Liquid Blue and expansive box sets of the Dead’s music. Bundles of unearthed live recordings are just as exciting to original Deadheads as sneakers are to hypebeasts — and they sell out almost just as quickly.

The Grateful Dead is very much alive, and not just in the fashion world. Part of its resurgence in popularity is due to Dead & Company, the recently formed touring band consisting of three surviving Dead members plus John Mayer, a known hypebeast. According to Pinkus, Mayer — an outspoken proponent of the Dead’s mergence with streetwear — has been a driving force in introducing the Dead’s music to a younger and more diverse audience. Phil Lesh, the Dead’s original bassist who isn’t in Dead & Company, still tours with his band, Phil Lesh & Friends, also bringing the Dead’s music across the country.

“The music is going to live on forever,” said Pinkus. “People will be listening to the Grateful Dead 100 years from now.”

As for the merch, those dancing bears won’t be going away any time soon. With both new and old fans continuing to rep Grateful Dead, it’s clear the band created more than just a successful music career. And as the band’s legacy keeps thriving, the immortality of the Dead will only get further cemented with every fresh drop of clothes, sneakers, or whatever else may be coming next.