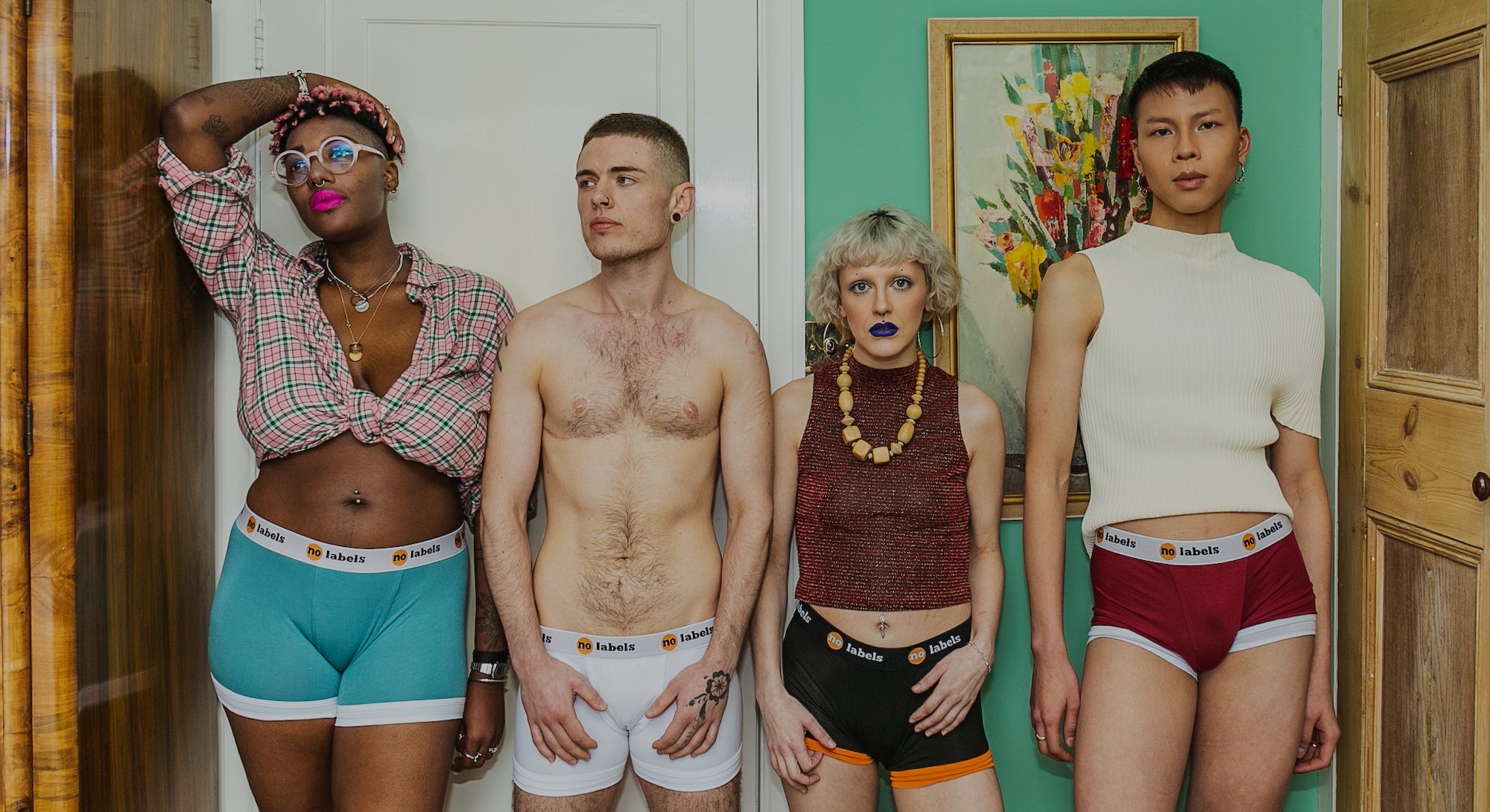 “It’s none of our business who you are, what genitals you’ve got,” said Lisa Honan, founder of gender-fluid underwear brand Gender Free World. “The gender part of your shopping experience with us is irrelevant.”

Honan launched Gender Free World in 2016, starting with a button-down shirt in four different silhouettes to fit people with larger busts and hips, as well as those with broader shoulders. Today, the brand is known for its solid-colored boxer briefs made of bamboo viscose with a waistband that reads “No Labels.” Its design is a play on traditional boxers, which usually display the brand name conspicuously on the waistband. The boxer brief comes in one style designed to fit every type of body, regardless of gender, and features a double layer in the front that’s suitable for all genitals.

While the fashion industry has expanded its offerings and embraced gender-neutral apparel for years, the gender-fluid underwear revolution is only just beginning. And it’s not just about creating something that makes all genders feel comfortable. It’s also about providing undergarments that empower people to be themselves and, above that, challenging labels and norms that have long defined fashion and the way we dress. Gender Free World, along with brands like Urbody and Play Out are leading the movement.

“We underestimate the way undergarments inform the way we feel in our clothes,” said Mere Abrams, who is transgender and co-founded Urbody to help other members of the trans, non-binary and gender nonconforming community feel comfortable and safe.

Abrams, a social worker, non-binary influencer, and activist created Urbody with longtime friend and fashion entrepreneur, Anna Graham. Urbody’s underwear assortment includes a bikini brief, a boxer brief, and a packing boxer brief made out of compression fabric. Available in red and black, the designs are sleek and minimal. “We wanted to create something that was beautiful, elevated, and still functional but comfortable,” Graham said.

Graham came up with the idea for Urbody after discovering that there weren’t many underwear styles available for people like Mere. “As a cisgender woman I have so many options available to me,” said Graham. “And here I was looking at Mere and Mere didn’t have those options. I felt that that was unfair.”

“The fashion industry has relied on gender stereotypes and binary understandings of bodies for far too long.”

While fashion has long categorized what people should wear and how they should shop by gender, brands need to wake up and change with the times. “The fashion industry has relied on gender stereotypes and binary understandings of bodies for far too long,” said Abrams. “The reason certain people don’t feel safe walking down the street is because the fashion industry has conditioned us to think that people should look one way.”

With the number of LGBT-identifying individuals steadily increasing, many members of this community don’t want to wear gendered underwear. According to a survey published by Gallup earlier this year, 5.6 percent of Americans identify as LGBT, compared to 3.5 percent in 2012. Also, nearly 16 percent of Gen Zers identify as LGBT, as opposed to just 2 percent of Boomers — and Gen Z has one of the biggest influences in steering the world of fashion.

In order for the industry to truly change, however, brands need to create more unique products so that everyone feels heard. Take what queer and trans-owned underwear brand Play Out is doing. Nothing is categorized by gender. Instead, underwear is grouped by the terms “flat front” and “pouch front.” Not only are the designs made for all bodies, but they also come in fun, artful prints that are universally available in all styles.

Founder Abby Sugar says there is no “subliminal allocation of gender” in Play Out’s undergarments. “It’s like here’s some comfortable, really cool styles,” she said. “Shop whatever version you wanna shop.”

Another aspect that’s key to appealing to the market (while helping remove the stigma around gender-neutral underwear) is using inclusive language. “Talk using terms that we’re all familiar with,” Abrams said. “When you talk in those terms then there’s very little to be stigmatized.”

“Every piece of clothing, every accessory, every piece of makeup should all be gender neutral,” said Rob Smith, founder of queer streetwear brand and platform, The Phluid Project. ”It’s all about marketing… a little about fit but mostly about marketing.”

It almost seems backwards that underwear is the newest addition to the gender-neutral clothing market, seeing as it’s what we put on first. Feeling good underneath our clothes can help us feel better and more confident externally. When your interior feels comfortable and safe, it evokes a sense of empowerment on the outside. “You know that you’re wearing something that you’ve actively been able to choose,” said Honan.

We should all be able to find underwear that not only feels physically comfortable, but expresses and embraces our authentic selves. For MI Leggett, designer of gender-free clothing label Official Rebrand, wearing men’s underwear helped them uncover parts of their non-binary/transmasculine identity and allowed them to connect with their gender fluidity. This affirming switch inspired them to design genderless undergarments for other queer individuals. “Having gender-neutral underwear can give you the space to realize that you feel better in something other than what you're assigned,” they said.

While many large brands participate in Pride, some do it in an inauthentic way, which is known as “rainbow washing.” An example of this is that Urban Outfitters sells rainbow-hued Pride apparel from Teva, Calvin Klein and more, despite the fact the company’s founder and CEO, Richard Hayne donated a large sum of money to a politician who opposes same-sex marriage.

Aside from using a rainbow to paint themselves as allies, brands like Urban still lack representation. Play Out, Gender Free World and Urbody are the ones actually making a difference in fashion. “Your average entrepreneur is not going to be able to understand what it’s like to be a trans woman,” said Leggett.

The gender-fluid underwear brands of today are optimistic for the future, and hope that the industry will become degendered altogether. But there’s still a long way to go, as Congress has only just started using gender-inclusive language, and gender-neutral bathrooms still aren’t the norm.

To degender the underwear market, large brands need to eliminate labeling their undergarments and expand their styles to be more inclusive, and brick and mortar retailers need to remove gendered sections and dressing rooms. “This will be normal in 10 years,” said Sugar. “You won’t have men’s underwear and women’s underwear... it’s just underwear.”

Honan agrees. “In the end hopefully people will go, ‘why does it matter, who cares?’”