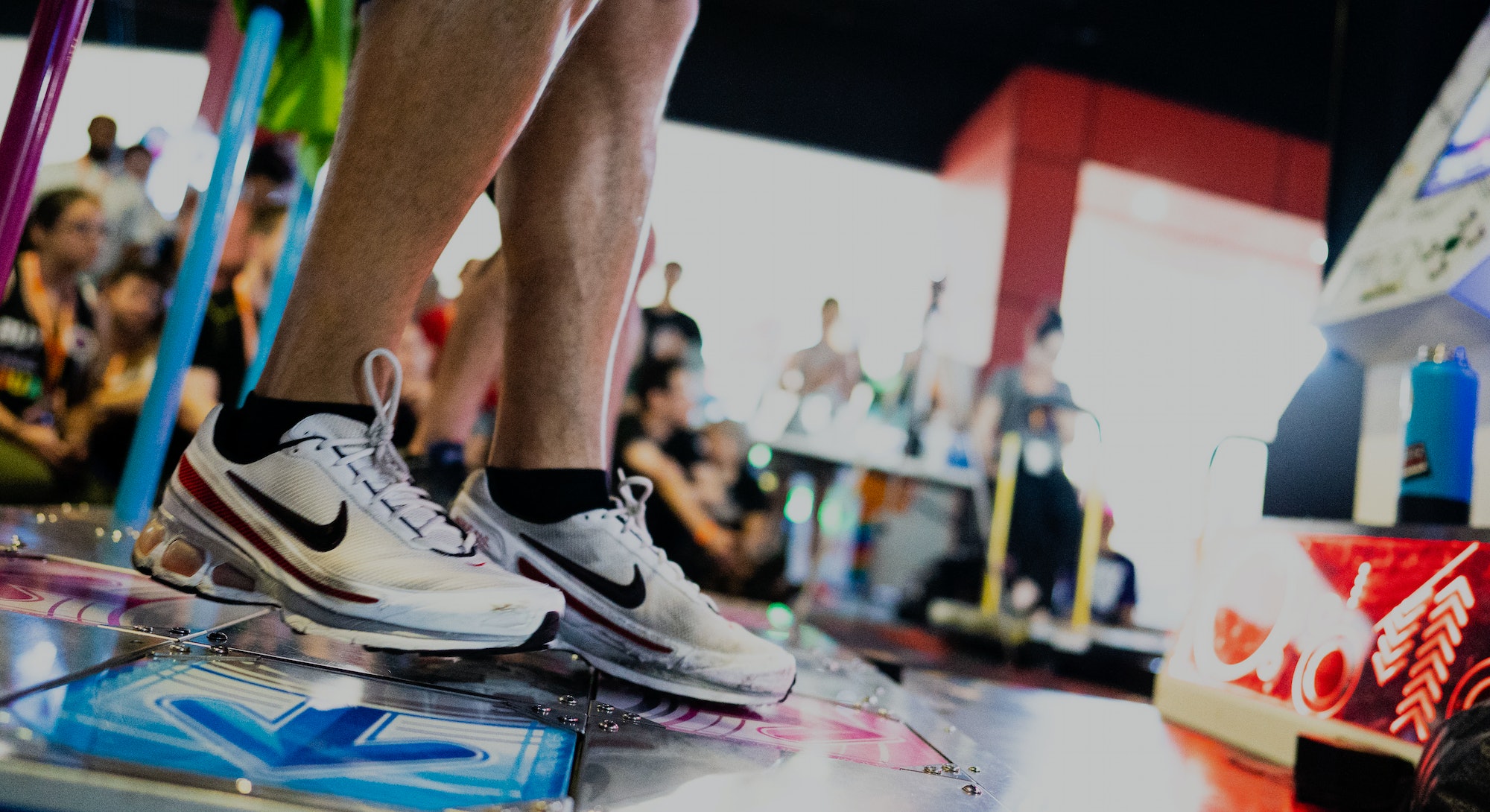 Like a pair of Nike Air Zoom Alphaflys for marathon runners or a SteelSeries gaming mouse for esports gamers, dance gamers have their own tools to help them reach peak performance.

But unlike the aforementioned athletes, the world's dance game competitors don't always have the luxury of sponsors backing their apparel and accessory choices. Instead, they've relied on years of trial and error to discover what makes for the perfect shoe to use when grazing the metallic platforms of games like Dance Dance Revolution, In the Groove, DanceRush: Stardom, and StepManiaX.

“Dance gamers have always preferred shoes with minimal weight so that they can react quickly,” Kyle Ward, developer of In the Groove and project lead of StepManiaX, tells Input. “It's quite difficult to find shoes with these requirements, as they must withstand harsh conditions and dancing abuse for several months.”

There’s no one-size-fits-all choice for the perfect dance sneaker. Like a trainer or basketball shoe, the preference depends on your play style and sometimes the specific game you play. Those who focus on stamina, for instance, need lightweight shoes (or thick socks) to help their feet slide across a dance pad during lengthy, rapid-fire songs. Those who play technical games are seeking accuracy and a high score. Moving with minimal effort to conserve energy is considered the ultimate flow state in both cases.

Some players of Dance Dance Revolution prefer shoes with thick heels and some bounce to help spring back from a step. Those who favor Pump It Up enjoy barefoot-style shoes that better allow for contortion, enabling players to use their toes to press down on a pad. A dance sneaker has to bear the grit of hours-long play for competitive players.

The Nike Air Max Turbulence is big, bulky, and bouncy. It helps him stomp on pads with precision.

DDR master Chris Chike, best known as iamchris4life, is an exception to the standard picks. Chike won 1st place in Dance Dance Revolution at the 6th Annual Konami Arcade Championship Finals in Japan, 2018 — the first year the company invited players from North America to compete — which led to Polygon deeming him the greatest DDR player in the world. Chike also holds 30 world records for the 17th installment in the franchise, DanceDanceRevolution A20 Plus. He’s an athlete of DDR, so much so that Taco Bell enlisted him for a recent commercial featuring the game. He achieved most of those accolades, sans the commercial, in a pair of Nike Air Max Turbulence.

“I just wore those to play,” he says. “And I just kept wearing them because they felt fine, and I got used to them for years.” Before using them in competitive DDR, Chike initially used his Nike Air Max Turbulence for high school track. Whenever he needs a replacement, Chike purchases a new pair of the same model on eBay.

The Nike Air Max Turbulence is big, bulky, and bouncy — the opposite of what many other rhythm game players seek in a supportive sneaker. But for Chike, it helps him stomp on pads with precision, and he’s accustomed to their weight and the sense of where his feet are landing at all times.

Minimalist shoes, which Chike describes as “closer to playing barefoot,” are the opposite of what he needs for his technical play style. But they’re a crucial tool for those who play Pump It Up and In the Groove. Coinciding with Chike’s rise to fame in the late 2000s and early 2010s was the popularity of the Puma Taper, deemed a must-have for minimal movement players. Ann Nakamura, an In the Groove and DDR competitor also known as Cygnus, was one such player to turn to the Puma model.

“They were just the most amazing shoes ever because they had the perfect amount of grip and slide,” she says of the now discontinued shoe. “The Taper was pretty much a reinforced sock, and the more you broke them in, the better they got.” According to Nakamura, ITG and PIU players used to seek out Tapers for their semi-slippy soles to aid them in gliding across brackets and hitting multiple panels simultaneously. They often hit the resale market at high prices. Today, Nakamura plays in a pair of “Active Gaming Footwear” shoes from Puma’s collaborative line with esports team Cloud9.

Since the Taper went out of production, barefoot shoes have risen in popularity within the rhythm game scene. And thanks to a YouTube video by In the Groove player ITGFlash, the Xero Shoes Speed Force is its cultural successor. In a similar endorsement from DanceRush: Stardom players, the Fuego has become a must-own shoe, partially due to a player named Enjiken, real name Jumario Simmons.

DanceRush: Stardom differs from other dance games like DDR and PIU because it’s less about precision and more about jumping, tapping, and sliding with style. The arcade cabinet features a large dance platform with sensors that track the foot movements of up to two players at a time. For Simmons, the translation between his love for dance and DanceRush is natural.

“In DanceRush, people who play at a high level I link to people who do hip-hop dance,” Simmons says. “The type of shoes you'd use for dancing in hip-hop are the same shoes you can use for DanceRush because the two are very, very similar. The game encourages you to dance and bring your own style. So a lot of people use stuff like Adidas Superstars and Puma Suedes — old B-boys shoes that have been around and have been tried and tested for decades.”

“When you first start playing dance games, shoes should be the last thing you worry about.”

When Simmons isn’t playing in Puma Suedes, he’s strapped in a pair of Fuegos. For DanceRush players, slippy, less-grippy shoes are essential. “You don't want no grip because that gets dangerous,” Simmons says. “You want some slickness because what you're doing is running your foot across what is essentially a polycarbonate hard plastic surface.”

Since playing in Fuegos, Simmons has been giving out codes to help him earn commission while streaming on Twitch. He’s become the face of the shoe in the dance game community — an influencer power that he, a professional yo-yoer, is still getting used to. Nonetheless, he says that dropping significant cash on a pair of shoes to play dance games with shouldn’t be the primary focus of play. “When you first start playing dance games, shoes should be the last thing you worry about,” Simmons says, “it should first be about learning the game, getting better at it.”

Like any sport, gear isn’t what makes a player the best. It takes hours and hours of dedication to clear high-level stages in games like Dance Dance Revolution and Pump It Up. But when the dance game hobbyists find themselves yearning to shed a few milliseconds off their reaction time, the right shoe can certainly help. And maybe a gym bag and a change of clothes for the arcade.