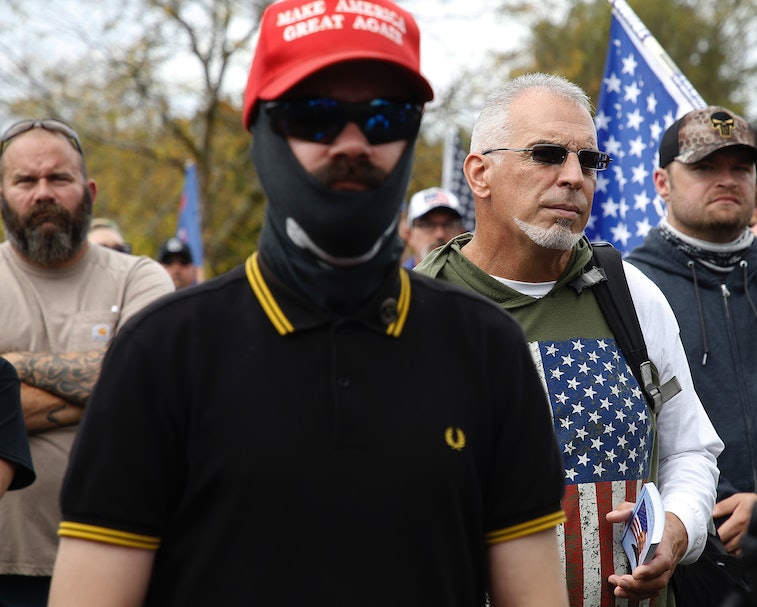 Fred Perry has had to withdraw one of its polos for sale because it has been adopted by the Proud Boys as part of their uniform. The neo-fascist group has taken to the brand's laurel wreath logo in black and yellow, leading to Fred Perry issuing a statement to distance itself from the Proud Boys.

"It is incredibly frustrating that this group has appropriated our Black/Yellow/Yellow twin tipped shirt and subverted our Laurel Wreath to their own ends," Fred Perry said in a statement posted to its website. "The Fred Perry shirt is a piece of British subcultural uniform, adopted by various groups of people who recognise their own values in what it stands for. We are proud of its lineage and what the Laurel Wreath has represented for over 65 years: inclusivity, diversity and independence."

Fred Perry had already halted sales — While Fred Perry issued the statement this week, the brand says it had already stopped selling the polo in question in the United States as of September 2019. Continuing its statement, the company said, "The Black/Yellow/Yellow twin tipped shirt has been an important part of that uniform since its introduction in the late '70s, and has been adopted generation after generation by various subcultures, without prejudice."

This isn't the first time Fred Perry has spoken out against the Proud Boys, which has been classified as a hate group by the Southern Poverty Law Center. The statement pointed to comments from Fred Perry chairman John Flynn in 2017, a year after the Proud Boys were founded by Vice co-founder Gavin McInnes.

"Fred was the son of a working-class socialist MP who became a world tennis champion at a time when tennis was an elitist sport," Flynn said. "He started a business with a Jewish businessman from Eastern Europe. It’s a shame we even have to answer questions like this. No, we don’t support the ideals or the group that you speak of. It is counter to our beliefs and the people we work with."

The alt-right has also ruined Hawaiian shirts — This isn't the first time wannabe Nazis have adopted a previously innocuous item of clothing either. The Booglaoo Boys, another far-right extremist group, have turned Hawaiian shirts into a symbol for their racist movement. They believe in an impending "second Civil War" and refer to it as the "boogaloo," alternatively known as the "big igloo" or "big luau." Floral shirts have therefore become shorthand for the latter nickname and serve as an attempt to abate their extremist views.

"It’s tough to talk about the danger of guys showing up to rallies in Hawaiian shirts without sounding a little bit ridiculous," Howard Graves, a senior analyst at SPLC, told the Wall Street Journal.

Previously, the alt-right had become known for a uniform of khakis and polo shirts because of that outfit's pervasiveness at the 2017 Unite the Right rally in Charlottesville, Virginia. Keeping up with what the Nazis are wearing has become an exhausting affair and constitutes the worst surveying of fashion trends.