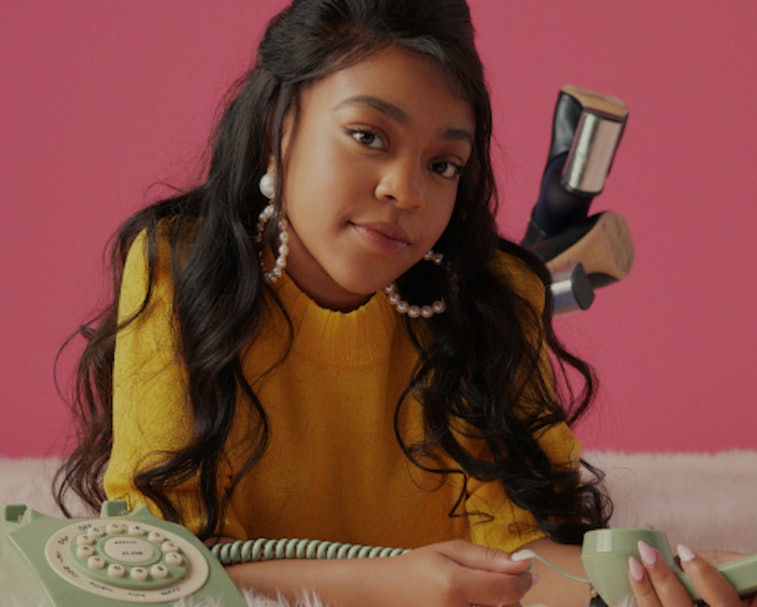 If you’re about to drop a dime on Shein, stop, pick up the phone, and call ThredUp. The secondhand retail company launched its Fast Fashion Confessional Hotline this week, a phone call service ready to talk you down from indulging in any potential fast fashion addictions.

When you dial 1-855-THREDUP, you’ll hear the voice of Stranger Things actor Priah Ferguson. Her pre-recorded message walks you through three options, with the ultimate goal of not adding any fuel to the dumpster fire that is fast fashion. In her words, “If you’re on the verge of a splurge, girl no.”

Press one and Ferguson will give you a pep talk on why you shouldn’t be giving fast fashion your hard-earned cash. Press two and she’ll go into the benefits of thrifting. Press three and she’ll give her own “fast fashion slip-up” story, and you’ll also have the chance to leave a confession of your own in voicemail. ThredUp may choose to use the voicemails down the road in order to keep the conversation going.

Kick the addiction — According to a ThredUp survey of 2,000 people from Gen Z, one in three consumers said they felt addicted to fast fashion, and over half of college students said they want to quit altogether. Younger generations are more eco-conscious, but their spending habits are also a major contributor to unsustainable practices.

“We were surprised by the number of people who said they were perfectly aware of their individual consumption habits and that they had an impact on the planet, but were doing it anyway,” ThredUp’s VP of Integrated Marketing Erin Wallace told Vogue Business. Wallace said the spending impulses often have to do with fast fashion’s hard-to-resist, Gen Z-focused marketing and cheap prices.

A bad habit — There’s no shortage of information on just how dangerous fast fashion is to personal health and the economy. A CBC Marketplace study found that one in every five items from fast fashion brands contained "elevated levels of chemicals — including lead, PFAs, and phthalates — that experts found concerning." Some pieces from Shein specifically contained 20 times the amount of lead that Health Canada says is safe for children. One shopper recently claimed she got chemical poisoning from a nail product she bought off Shein.

ThredUp’s hotline aims to shift society’s fast fashion consumption into a more circular solution. The company has paired with Tommy Hilfiger on another resale program and is also adding a discount code to the hotline as an incentive to shop secondhand. In the words of Ferguson, you and the planet deserve better.