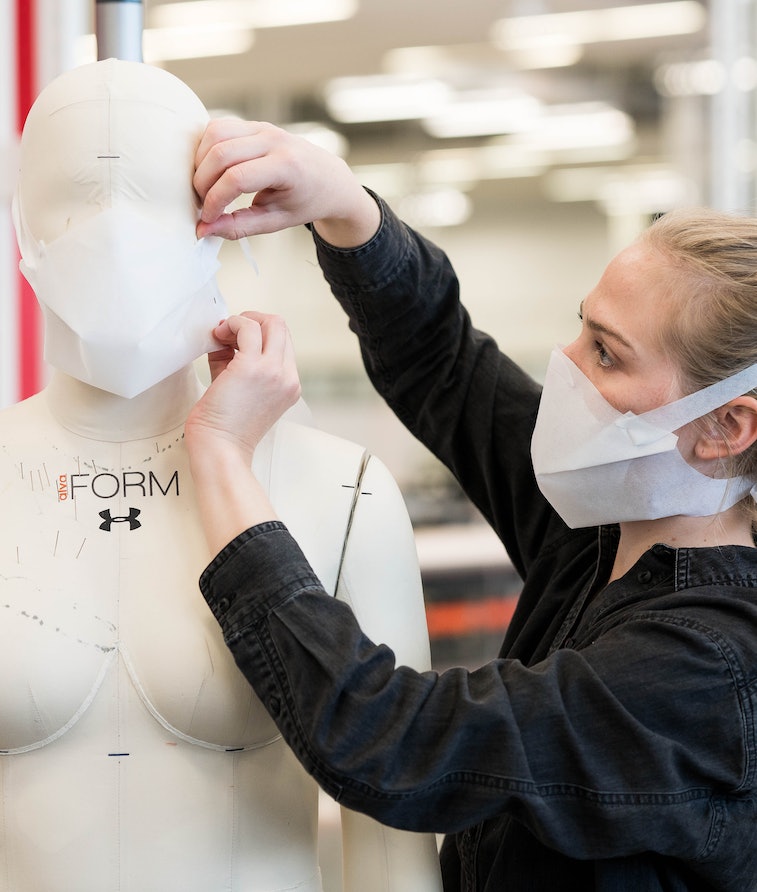 The U.S. needs masks. Healthcare workers across the country, who are putting themselves on the line to address the crisis brought on by the COVID-19 coronavirus, have been pleading for more protective gear for weeks. That we’d reach this point has been predictable since, well, the outset.

Last month, prior to any American cities ordering social distancing, price gouging of masks, other protective gear, and sanitizing products on Amazon signaled a shortage. Government health officials advised the public to stop buying up masks to not only protect health care workers, but also because they were deemed ineffective. The latter point remains questionable, increasingly so now that officials are reportedly considering a reversal of that advice. Still, we saw the government itself worried about supply more than a month ago. What we haven’t seen is enough action on its part.

Footwear and apparel brands in the U.S. have stepped, however. Numerous companies with stateside factories have announced they’re switching up operations to help address the lack of enough masks. You’d have to be naive not to believe that a good deed is also good PR, not to mention a likely tax break. Even setting that aside, the actions undertaken by the industry provide a sharp contrast from the government’s inaction. Companies also have to ensure that whatever protective product they make, be it a mask or a gown, meets the CDC's guidelines.

In New York, which has become the nation’s hotbed for the disease, cries for help have been met with Donald Trump claiming out of thin air that shortages are due to masks being stolen. The president has yet to invoke the Defense Production Act, a Korean War-era law that allows the commander-in-chief to force businesses to accept and prioritize orders for national defense. He’s repeatedly offered weak excuses for why he hasn’t done so and is treating it as a last resort — despite using it to place thousands of orders for the military, border control, and other disaster relief efforts during his term.

Los Angeles Apparel, Dov Charney’s follow-up to his ouster from American Apparel, began manufacturing masks six weeks ago, according to the Los Angeles Times. They’re available to purchase now in packs of three for $30, with proceeds enabling the company to donate masks to essential services. Thousands of donations have been made, and the masks are also available at wholesale for hospitals, health care providers, first responders, and other organizations in need.

When the guy kicked out of his own company for sexual misconduct starts looking like the good guy, you know someone else is dropping the ball.

Less problematic is Rihanna, who’s made a fortune from her cosmetics and fashion ventures. In addition to donating ventilators to her native country of Barbados, she’s donated medical equipment to New York City and made a $5 million donation to assist the U.S. and other nations. Then there's designer Christian Siriano, who basically turned his fashion house into a mask-making factory, as a way to help New York Governor Andrew Cuomo in his plead for more personal protective equipment (PPE) for the medical community.

Brooks Brothers, the oldest retailer in the country, joined the cause this week and announced it’ll produce 150,000 thousands masks per day from its factories in four states. Workers had been in self-quarantine for two weeks but will return for the initiative. And, on a smaller scale, New Balance announced plans to begin production on up to 100,000 masks per week beginning in mid-April. Distribution of the masks will be made at cost and/or by donation.

The biggest pledge has come from Fanatics, a sports apparel licensee, which has promised a million masks and gowns for its home state of Pennsylvania. To make it happen, the company ceased production of Major League Baseball jerseys. Both Fanatics and MLB are taking on the cost of the donations.

Elsewhere in the sports world, Nike and Under Armour have announced plans to get involved by producing face shields. In addition, Under Armour has also begun to produce masks, gowns, and specially equipped fanny packs for local health providers. Nike’s face shields are still in the prototyping phase, but the company has announced $15 million in donation toward relief efforts. Ralph Lauren, too, is producing 250,000 masks and 25,000 gowns on top of a $10 million donation toward global relief efforts.

As more cities become affected and the duration continues, it’s going to take more than the good will of private actors to make things right.

Fashion has also come forward to address the need for hand sanitizer. Kylie Jenner and her mother Kris are working with Coty Inc., the major shareholder of Kylie Cosmetics, to provide California hospitals with hand sanitizer after donating $1 million toward relief efforts. Outside the country, LVMH is using factories that produce perfume and cosmetics for Christian Dior, Guerlain, and Givenchy to make hydroalcoholic gel for French hospitals and health authorities, free of charge.

The list of companies and individuals joining the cause is likely to keep expanding, providing a semblance of faith in humanity. It’s harder to believe in the Trump administration, which has the real power to solve the problem and is still dragging its feet. New York City alone has asked for a minimum of 300,000 masks. As more cities become affected and the duration continues, it’s going to take more than the good will of private actors to make things right.