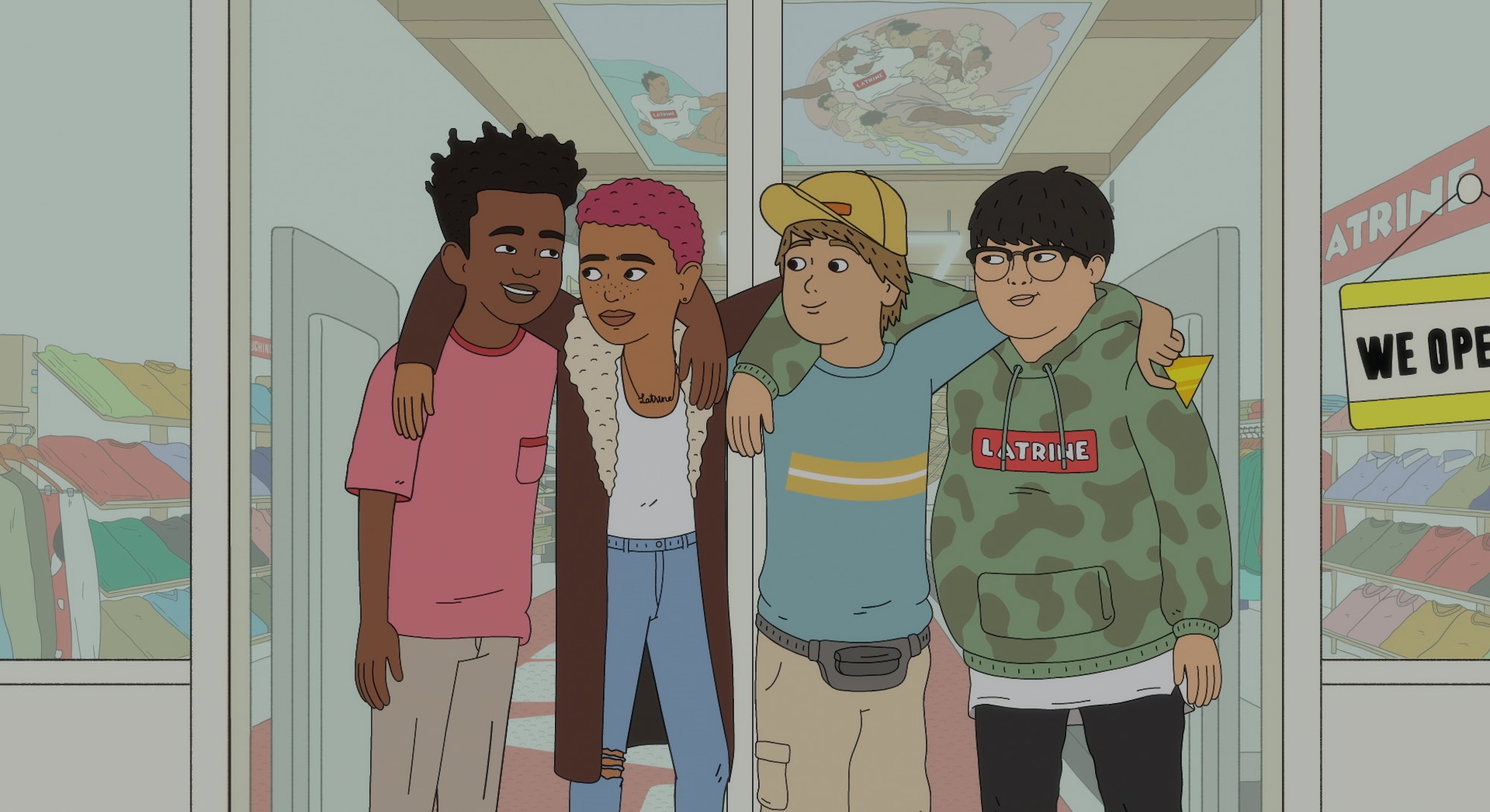 In an alternate and animated universe, hypebeasts line up not for Supreme but “Latrine.”

The stand-in brand makes use of the same Box Logo while hawking everything from T-shirts to fire extinguishers, and no one is the wiser that the name means “toilet” in French. It doesn’t matter that no one knows why Dr. Phil is on one of Latrine’s T-shirts or who even is — wearing the tees helps garner clout in the ultimate pursuit of becoming an influencer.

This is the lay of the land in Fairfax, Amazon’s new animated series following a group of 7th graders as they beast for hype on Los Angeles’ streetwear main street. The show, which premieres October 29, is both an homage and parody of streetwear, sneakers, and the zoomers that hold them so dear. Anyone with a bit of self-awareness and who’s immersed themselves in the quest for hyped shoes, clothing, and accessories will eventually realize how absurd the game is, a quality that Fairfax leans into heavily while also capturing the heart at the core of any coming-of-age story.

New to Fairfax Avenue is Dale (Skyler Gisondo), an earnest Eagle Scout who’s moved with his family from Portland to operate a vape store. His earnest outdoor look is mistaken for a play at normcore by his new friends and shepherds in the world of hype. Derica (Kiersey Clemons) is a budding activist who still manages to carve out time for the latest drop, while Benny (Peter Kim) chases the dream of being a reseller to the stars when his parents aren’t making him practice his cello. Rounding out the crew is Truman (Jaboukie Young-White), an aspiring filmmaker who earns his money for jawnz by shooting dating app portraits for older women.

Streetwear and sneaker culture have yet to truly take hold in television, notwithstanding Netflix’s Sneakerheads and the HBO competition series The Hype. Both of those shows suffered from taking themselves too seriously in a heavy-handed grasp of what’s “cool,” but the more farcical nature of Fairfax gives it a real shot at becoming the defining series for hypebeasts prepared to laugh at themselves.

“We love all this stuff. We love Supreme, we love fashion,” says Matthew Hausfater, one Fairfax’s three co-creators and whose first job was at a vintage T-shirt store on Melrose Place.” “But we also realize that some of it can be silly. There’s a fun balance between what is funny and what we think is cool, and we want to portray all of it in a way that felt like we were laughing with people instead of laughing at them.”

“There’s a fun balance between what is funny and what we think is cool.”

Indeed, there should be plenty of laughs even if you’re not familiar with the history of the Nike Air Yeezy or up to date on the latest Supreme drop. Dale and the viewer are given a crash course on the street he calls the “Hogwarts of fashion,” and the gang (or “gang gang”) jump right into the chase for the Dr. Phill Box Logo tee in Fairfax’s premiere episode. The second episode brings Dale onto Instagram, where he must garner 100 followers in order to gain entrance to an influencer party. But even as sneakers and streetwear fill the atmosphere, there’s room for the kids to do community service at a retirement home or for Benny to try out for an Esports team in later episodes.

While Fairfax is about kids, it’s made for adults, many of whom may have already begun aging out of the world of hype. There’s no shortage of vulgarity, and the dialogue is riddled with Gen Z-approved vernacular. Real zoomers came into the writers room in order to have their brains picked, and the creator’s admit they spent a nontrivial amount of time on TikTok and Instagram in the name of research.

Along with Hausfater, the two other creators are Teddy Riley and Aaron Buschbaum, the latter of whom met each other in college and have sold several scripts as a writing team. All three grew up in Los Angeles with a love of streetwear and sneakers, although they’re no longer as hype-obsessed as they once were. Instead, they’re more fans of the culture than as active of participants, and they see Fairfax as an ode to Gen Z, which has taken the mantle of the youth and provides hope for progressive ideals going forward.

“We always say they are the generation that’s going to change the world,” Buschbaum says. “They are all walking marketing executives for their own brand. But they’re also the generation that’s getting face tattoos, eating tide pods, and doing the milk crate challenge. So it’s a really fascinating and interesting mix.”

To help hone in on the show’s voice, Nick Santiago and Matthew Hwang of Pizzaslime were enlisted as consulting producers. Pizzaslime serves as something of a streetwear catch-all — part brand and part consulting agency with a full grasp on the zeitgeist. They’re masters of the streetwear meme that takes pot shots at the very culture they participate in, similar to a Throwing Fits or Nolita Dirtbag.

“They’re longtime buddies of [Buschbaum and I], and their finger is on the pulse in a way we know ours weren’t,” Riley says. “It was really important to us to have partners like Pizzaslime, Some Hoodlum, and some of the writers we brought on to help collectively guide the authenticity of the show.”

Hausfater, who didn’t know the men behind Pizzaslime prior to the show, says he found them hilarious from the onset of their very first meeting and that they immediately understood the mix of celebration and parody they were aiming for.

When I ask Fairfax’s trio of founders if they’ve found another avenue for the obsession streetwear calls for, perhaps vintage furniture or rare plants, Hausfater says they all have an eye for the fancy but their budget isn’t quite there yet. “It would be really cool to have an Eames chair,” he says. “But they’re also like six grand. But I think we would all like to reach the next level of balling.”

Here, Buschbaum interrupts and suggests that if the show goes well, then Hausfater can get his Eames chair. And that day may not be too far away, as Amazon has already renewed Fairfax for a second season before the general public has seen it. In the meantime, they will be among the very few to own a real-life Dr. Phil Box Logo tee — which is only being given out to select people and in a fire extinguisher case as promotion for the show. After all, if chasing grails has become too tiresome, why not just make your own?