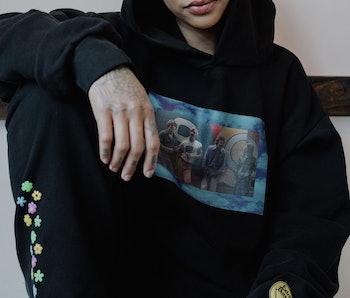 If so, allow us to introduce you to Extra Butter’s 4/20 celebration. The New York City sneaker boutique is celebrating the stoner holiday by releasing a capsule commemorating Dazed and Confused. While not an outright stoner flick, the 1993 teenage comedy had no shortage of zonkage — and it’s the deadbeats who take front and center in the 4/20 goods.

Matthew McConaughey’s iconic turn as David Wooderson gets prime showing on the capsule’s hoodie, which features him standing in front of the arcade with Pink and Mitch. We’re not going to say you need to buy this hoodie — but it’d be a lot cooler if you did.

What else are they packin’? — Milla Jovovich’s character gets her own long sleeve T-shirt, while a short sleeve tee takes inspiration from head shop black light posters. Extra Butter was able to gain access to behind-the-scenes photos from Dazed and Confused provided by Universal Pictures. So while the scenes may be familiar if you’ve seen the movie once or a dozen times, the selection is more unique than you realized.

Throughout the line, the movie’s smiley face logo has been tweaked to add Extra Butter’s name, including on a tie-dye T-shirt without any other branding. Puff print and embroidery are another nod to stoner culture, but also bring a higher layer of quality not native to movie merch. For those looking for something more functional for their habits, the new smiley logo also appears on a grinder and rolling tray.

Dropping before the holiday — April 20 may not be ideal for remembering to buy stuff, but you can cop with a clear mind when the Dazed and Confused collection drops online and in stores this Friday, April 16. Marijuana-themed merch skews obnoxious more often than not, but honoring Richard Linklater’s early classic is a move we can endorse during any time of the year.