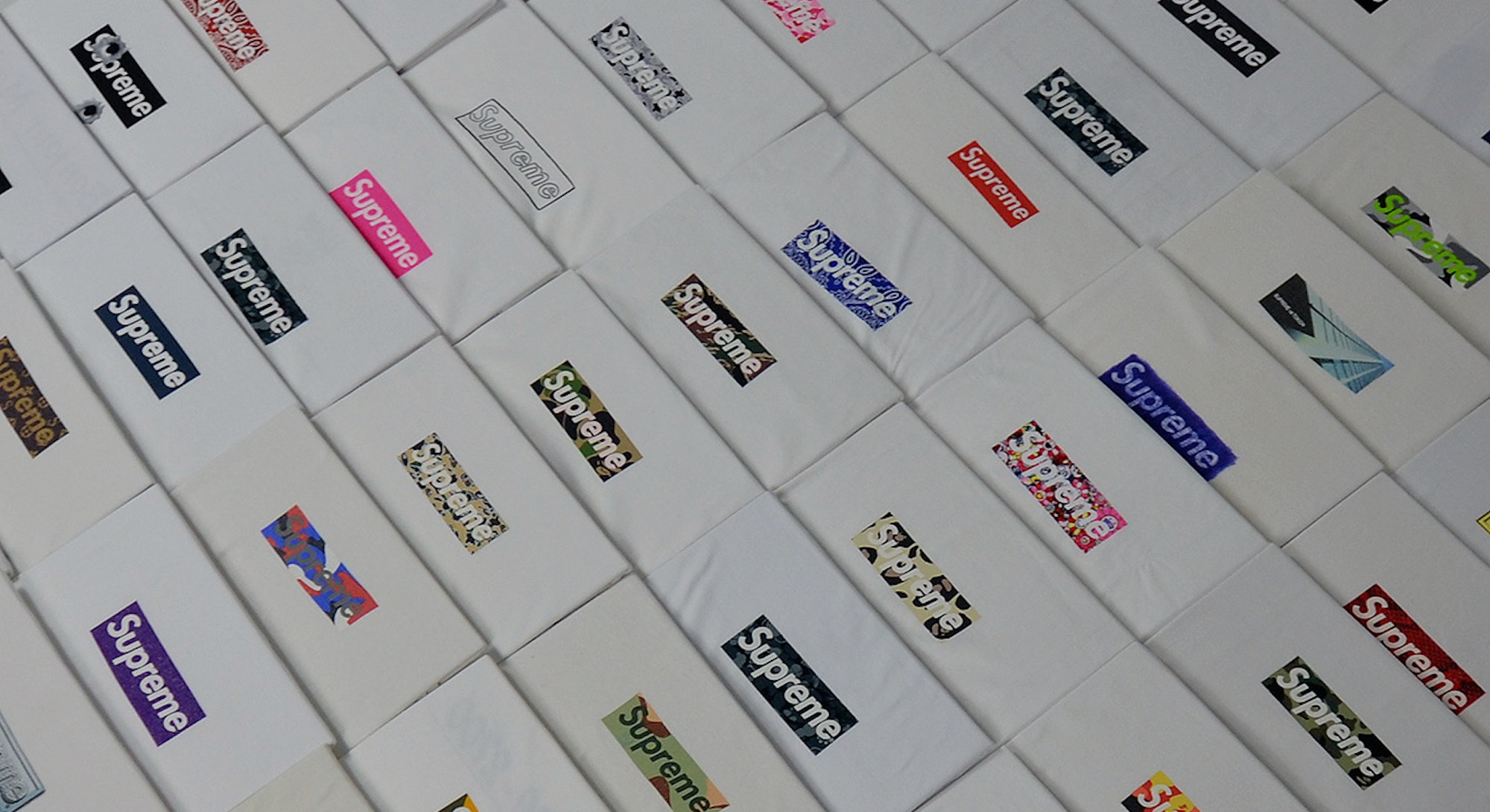 Supreme is becoming a common sight at the world’s premiere auction houses.

Sotheby’s and Christie’s, both of which have been in business since the 18th century, have recently introduced rare streetwear and sneakers in a bid to appeal to (wealthy) millennials and zoomers. Artcurial, the world’s third largest auction house, became the first to hawk Supreme, as it fetched $1 million in total for a lot of 135 products from the New York City-based streetwear brand. Sotheby’s followed suit with a complete collection of Supreme skateboard decks that sold for $800,000, but it’s Christie’s that secured the holy grail with every single "Box Logo" T-shirt ever made.

The Box Logo tee is the most recognizable item from streetwear’s most recognizable brand. 253 of them have been made since Supreme first opened in 1994, and a 21-year-old collector from Vancouver named James Bogart managed the impossible feat of putting them all together.

Bogart has been acquiring and selling rare Supreme items since 2015, but he says his pursuit of every single Box Logo T-shirt didn’t begin in earnest until two years ago. No one in his circle — including fellow collectors and early staffers at Supreme — thought it was possible, primarily because no one could even agree on what a complete collection would look like.

The financial barrier to acquiring the streetwear Infinity Stones is already high enough, as known rarities like the T-shirt made for the opening of Supreme’s Harajuku store in Tokyo have sold for more than $1,800. In addition to landing those sought-after pieces, Bogart had to find the ones few even knew existed. Among his collection, which will become available for private sale December 1, is a one-off tie-dye tee that never went into production, a blue-and-red marble Box Logo from 1997, and an assortment of colors from the first few years of Supreme.

67 percent of the collection predates 2007, and not even Supreme kept track, let alone made an archive, of all of its Box Logo tees. Bogart is the first person to assemble them all, and for his efforts he’s looking at a sale estimated to garner $2 million. To discuss how he did it, we hopped on Zoom with the zoomer set for a serious pay day.

Input: How did you first get into Supreme?

Bogart: Stuart In 2014, it had piqued my interest for reasons that I’d say today aren’t as conventional. It was a recognizable brand then, but what really brought me to the Box Logo specifically was the rarity and obscurity of some of them. I wanted to buy and consume Supreme, but I didn’t want to get the most recognizable pieces. I wanted to buy the most obscure Box tees and pride myself on being one of the only people who had access to them or was wearing them.

In 2014, I ended up picking a couple pieces and getting my feet under me. I was 15 years old. By 2015, I started picking up as many pieces as I could, and that’s when the obsession really began.

When did you begin to seek out a complete collection of all the Box Logos?

Probably around two years ago, that became the ultimate goal. I had amassed so many, and I had knocked off what I believed then were some of the really difficult ones. When it came to selling, I couldn’t bring myself to do it. I also knew if a piece wasn’t in great condition, I’d be able to find it down the line and I didn’t really want it in my collection.

When it came to those really hard-to-find pieces, I always held onto them. I realized I had a lot here. I thought if I could get all of my friends together and agree on everything made, I thought it would be feasible. They didn’t believe in it, but I did.

Were you wearing these tees along the way or keeping them on ice?

A lot of the tees that were coming through that weren’t in the best condition, I would wear them and wouldn’t consider part of the end collection. I have a long, long list of favorites that I was looking to double or triple up on.

What were some of the most difficult tees to acquire?

An interesting fact is that 67 of the collection was released before 2007. A lot of the earlier ones, like the ones from the early 90s, are super difficult to track down or even verify as real. Those early colorways, people didn’t even know if they existed, per say. So tracking down something that you don’t even know exists is nearly impossible. It comes down to luck and persistence.

So how did you go about figuring out if some of these tees even existed?

The large majority of these shirts aren’t cataloged officially or unofficially. It really helped to connect with people who paved the way before me. I talked to people who were around the shop in the first year of the shop and years following. I really relied on those people to come to the most definitive answer.

More so than anything, I’ve been around this for so long and I’ve had tens of thousands of conversations about these tees with everyone from people who’ve worked for the brand to more behind the scenes. So we drummed up what we believed to be every single tee, and now we can say it is every single tee.

“It was always about doing the collection justice.”

What are some of your personal favorites?

If I had to boil it down to three, I’d go with the Futura Box Logo T-shirt in white. The Bape Fire Camo Box Logo, it’s number 10 out of 15 that they released and came out in 2000-2001. And then the Mo’Wax Box Logo, that was done with James Levelle’s label and features artwork from Vertura. It was released in the Saatchi Gallery, and only 50 were ever made.

I absolutely love Futura. All three of them saw very special releases, and the two from Futura didn’t feature public releases, per se. Because the Mo-Wax one was released only in the gallery, finding a legitimate one is very special. The Futura Box Logos that released in Hong Kong, only 150 came out in each colorway.

Since you started collecting at 15 years old, what did your parents think?

At first, they thought it was completely ridiculous. The product was cheaper then, but they still couldn’t fathom $200 for a T-shirt. Reselling is also quite a lucrative business, and it wasn’t conflicting with anything else, so they grew to appreciate it.

So you were reselling other products in this time?

Absolutely. I always loved to deal in the vintage space. It always seemed a little more lucrative. That’s where my passion grew, and being able to connect with other enthusiasts like myself who were looking for early shirts was personally rewarding and paid off in the long run. There have been a lot of people who I’ve had to tap to complete this collection.

When did you decide you would sell the complete collection?

What kept me going for so long that A. I was consistently hunting the stuff and B. everyone told me it was impossible. It was the people I was buying from and who I respected. I know one guy who tried to do it for nine consistent years, and he wasn’t able to do it. He was more connected than I am.

“Reselling is also quite a lucrative business.”

How did you decide to partner with Christie’s to sell it?

My friend Ibrahim Itani, he did an auction in partnership with Christie’s. When that had concluded, he knew what I was doing, and he said if you want this connection can be made. The timing worked super well.

So now that it is up for sale, what’s next? Is there another pursuit?

It’s a really tough question that I get a lot. I think what was so attractive about the pursuit is that everyone thought it was impossible. And if there was going to be one Supreme collection that would be the most challenging and rewarding, it would be the Box Logo T-shirts. It’s the absolute pinnacle and pumping heart of the brand, always has been and always will be.

What comes next, full disclosure, I have no idea. The first thing I’ll do is try to go back and pick up some of my favorites again. At least the ones I can find, because even for me it’ll still be extremely difficult.