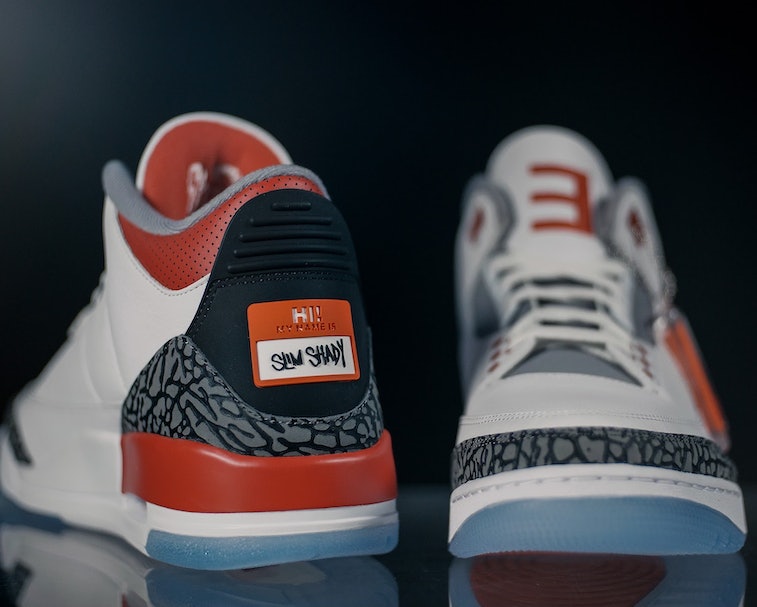 Last night’s Super Bowl came with no shortage of spectacles, but sneakerheads were paying particular attention to Eminem’s feet during his halftime performance. The rapper debuted a pair of Air Jordan 3s bearing a “Slim Shady” name tag, adding to his sparse and extremely valuable history of Jumpman collaborations.

The red, white, and black sneakers come with a raised, rubber name tag on the heel and Eminem’s backwards “E” logo on the tongue. Icy blue outsoles make a rare appearance on the Air Jordan 3, and there appears to be additional personalization on the inside of the tongue that has yet to be unveiled.

Unlike Justin Timberlake’s Air Jordan 3, which debuted and was sold during the Super Bowl in 2018, there’s no word yet on if or when Eminem’s will go on sale. It’s possible that supply chain issues prevented Jordan Brand from doing another flash release during the Super Bowl, but the company may also have something else planned to ensure the “Slim Shady” 3s are as special as Eminem’s previous sneakers.

Eminem’s 3s might go for a whole lot of money — Eminem and Jordan Brand have released a total of three sneakers together, including two different versions of the Air Jordan 4. Just 50 pairs of the Air Jordan 4 “Encore” were made in 2004, and the only way to get one was by being a friend of the rapper or winning one of 23 additional pairs that went up for raffle in 2017. The “Carhartt” version of the Air Jordan 4 released in 2015 through a charity auction on eBay, and that sneaker was even more rare with just 10 pairs produced.

Both of Eminem’s Air Jordan 4s have sold for more than $20,000 on the resale market and are amongst the most valuable Jordans of all-time. His Air Jordan 2 “The Way I Am,” which came covered in hand-written lyrics in 2008, isn’t quite as sought-after with resale prices in the mid-four-figure range but is still fairly rare with just 313 pairs made.

A charitable component is likely if Jordan Brand does go on to release the Air Jordan 3 “Slim Shady,” and collectors will be eager to get ahold of Eminem’s fourth pair of Js. A raffle could prevent pairs from automatically ending up in the hands of the wealthy, but then again it’d be hard to pass up on the payday for whoever might win.