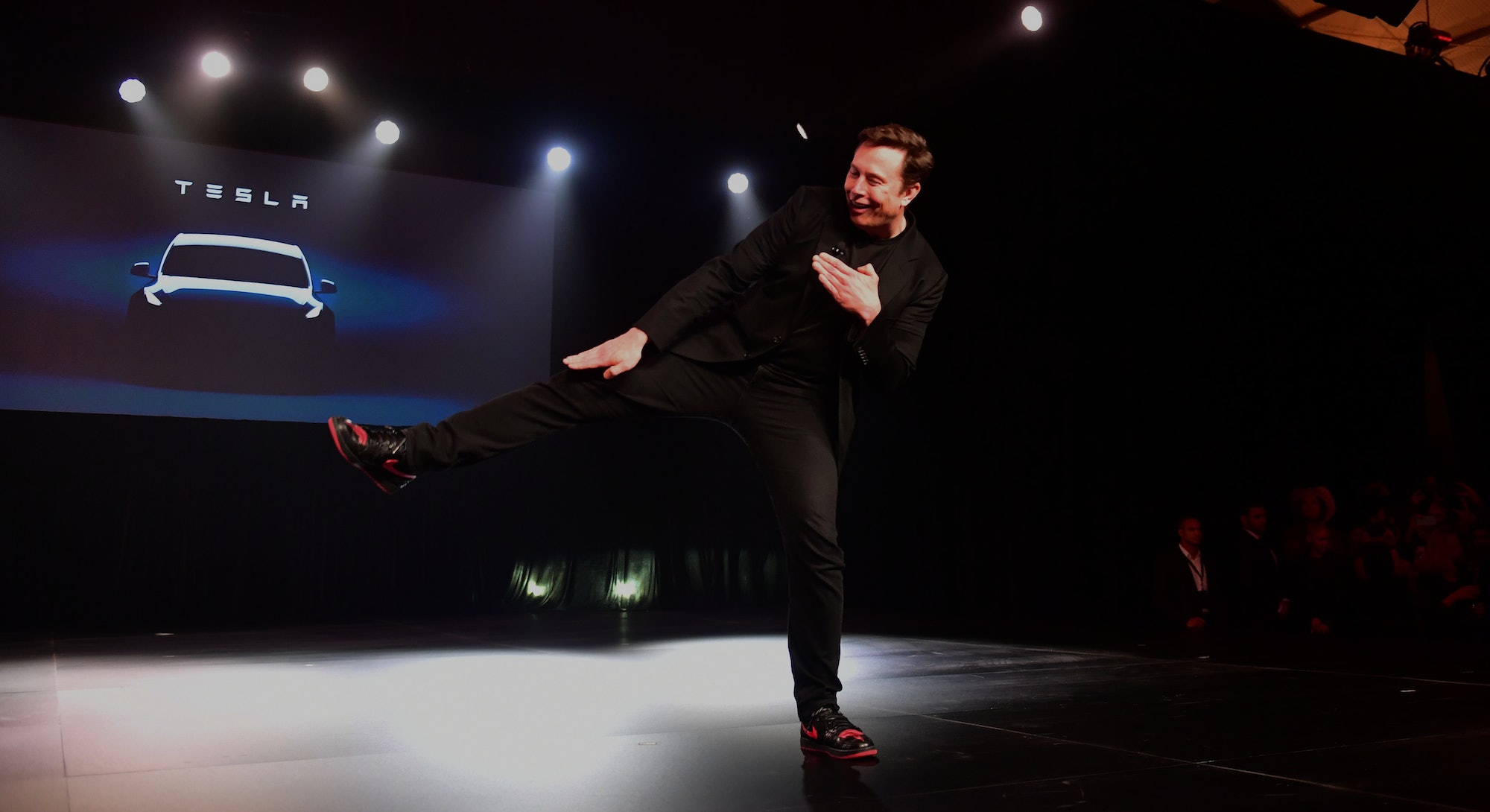 When Elon Musk has an idea, the world listens.

The controversial entrepreneur helped create the Model 3, the best-selling electric vehicle in the country, and Falcon Heavy, the most powerful operational rocket in the world. In addition to designing innovative transportation, Musk is also involved in creating Tesla merch, which includes outlandish products like a lightning bolt-shaped bottle of tequila and a $500 flamethrower. And who can’t forget the red satin booty shorts with gold lettering spelling out “S3XY,” both a reference to Tesla’s range of vehicles and a clap-back directed at Tesla “shorters” who look to make a quick profit shorting the company’s shares.

Yet another memorable Tesla-branded product is the custom, red-and-black Nike Air Jordan 1 sneaker that Musk wore to the reveal of the Model Y in 2019. The shoe is mostly black with red outsoles, a red Nike Swoosh logo, and a red laser-cut Tesla logo on the toe. Featuring luxurious materials like Hair on Hide, genuine python skin, and lambskin, the “Tesla” Air Jordan 1 isn’t actually sold by Tesla (or Nike) — they were made exclusively for Musk by Los Angeles-based shoe manufacturer, DeMarco Custom Sneakers.

DeMarco is run by Marco Acosta Sr. and his son, Marco Acosta Jr., a family of dedicated shoemakers originally from Guadalajara, Mexico. Fifteen years ago, they moved to the U.S. to start their own shoe-making business, and DeMarco was born. They started off making shoes for characters at Disney parks — think of the big cartoonish shoes that Mickey Mouse wears when you go to get his autograph. They transitioned into custom sneakers by accident, when Acosta Jr. created a pair of purple and gray Air Jordans that garnered instant hype.

As a longtime sneakerhead, Acosta Jr. was searching for a pair of unique shoes, so he decided to make them himself. Using the equipment at the DeMarco factory, he made a pair of low-top Air Jordans with grey ostrich leather and purple alligator skin. He then wore them to different sneaker events like ComplexCon and SneakerCon, posting photos of them on social media. After receiving endless compliments and messages, he realized that there was a demand for shoes with specialty fabrics within the custom sneaker space, and the rest was history.

Today, DeMarco is known for its one-of-a-kind, premium-quality shoes, just like the pair that was made for Musk.

The Tesla Air Jordans were designed by Acosta Jr., 28. The idea for the shoe came about in 2018, when a close friend of Musk’s approached DeMarco to create a custom sneaker for the Tesla CEO’s upcoming birthday. His only requirements were that the shoe be an Air Jordan and incorporate the Tesla logo. Given extensive creative freedom, Acosta conceptualized everything from color combinations to fabrics to logo placement.

Acosta chose the exquisite mix of leather fabrics as a nod to Musk’s extravagant taste. Musk, who is the CEO of both Tesla and SpaceX, and founder of The Boring Company and Neuralink, is worth an estimated $182.9 billion and was named the richest person in the world in January 2021 by Forbes, though he no longer holds that title. “I just wanted to make something premium,” Acosta explained. “If you’re trying to do something for Elon, you want to do something that’s going to blow his mind.”

Handcrafted in DeMarco’s LA factory, the Tesla Jordans took 22 hours to produce — slightly longer than the typical DeMarco sneaker, which takes about 12-15 hours. To make a custom design, the company first purchases the sneakers and deconstructs and destroys them, throwing out everything but the original sole. Then it’s time for shoelasting, a process that involves creating a plastic mold in the size of the shoe and draping the materials around it, using a special chemical to make the leather malleable. Once the components are stitched together and attached to the sole, the shoe is complete.

Though Musk received his Tesla Air Jordans in 2018, he didn’t actually wear them until a year later at the Model Y unveiling. Musk isn’t someone known for his style — he typically favors monochromatic jeans-and-T-shirt looks and punctuates them with black leather boots.

Not to mention, Musk rarely wears sneakers (though he’s said to rock the Nike Lunar Flyknit HTM NRG on occasion). At the reveal, Musk styled his size-13 Jordans alongside a crisp black blazer and black jeans, allowing the sneakers to steal the show. Acosta vividly remembers the moment the shoe broke the internet. After Musk tagged DeMarco in a Twitter post, Acosta’s phone blew up in the middle of the night with hundreds of direct messages and emails from people asking how to buy the shoes.

Sneaker collectors, Tesla owners, and Musk aficionados all wanted a pair. Within a month of Musk wearing the Tesla Jordans, DeMarco gained thousands of Instagram followers, giving the brand its largest audience yet. The custom shoes also received plenty of media coverage from fashion and sneaker blogs, creating an aura of hype around Musk’s personalized Tesla Jordans.

Musk is no average celebrity — the polarizing businessman has millions of admirers and “Musketeers” all over the world and is known as one of the richest, most innovative, and most powerful people. But he has just as many detractors. The Tesla CEO’s inimitable influence can help any brand he interacts with grow its business, as it did for DeMarco. “For me, that has been the best moment for our career,” Acosta said. “I don’t think that there’s any customizer out there that has put a shoe on a person as high up as him.”

DeMarco decided to create six pairs of special-edition Tesla Jordans that were numbered and came in an acrylic box featuring a Tesla logo. Right now, you can still buy a pair that look exactly like Musk’s shoes — just without the numbers and the fancy box. They retail for $1,500, a small price to pay compared to a Tesla vehicle, which can cost up to $100,000.

Beyond DeMarco, other independent designers like the Shoe Surgeon are making pairs for LeBron James and Drake, and collaborating with Michael B. Jordan and GOAT on one-of-a-kind silhouettes.

“If we like something and we think it’s going to look good on a shoe, we find a way to make it work.”

Acosta feels that consumer interest in the custom shoe market is only increasing due to a shift in demand. Sneakerheads are buying customs so they’ll get something that’s unique, personal, and built to last, rather than splurging on a hyped-up pair of kicks on a site like GOAT or StockX. Why spend thousands on a pair of Macklemore Jordans or Swarovski-embellished Dunks when you can design your own pair of custom sneakers for under $2,000?

“People are getting tired of the resale,” Acosta said. Instead, buying a pair of custom shoes, like the ones DeMarco makes, allows the customer to invest in premium materials and make a conscious, ethical purchase. “They’re getting tired of spending thousands of dollars for a shoe that was made in China,” he said.

DeMarco also expects to continue thriving within the custom space because of its ability to use unconventional fabrics that aren’t normally associated with sneakers. Not only can you customize a pair of DeMarco shoes with exotic leathers, but you can choose from a variety of fabrics including brocade, cork, PVC, and even repurposed Louis Vuitton, Dior, and Gucci handbags. “We’re always pushing the envelope and doing what other people think is impossible,” Acosta said. “If we like something and we think it’s going to look good on a shoe, we find a way to make it work.”

While it’s uncertain if DeMarco will make another Tesla Jordan, just creating that one pair made an undeniable impact on the indie custom brand. The sneakers emerged as an idea for a birthday gift and came to life because of a talented designer, and Musk’s decision to wear them to an important launch event was a pleasant and unexpected surprise. And what may have been a simple wardrobe choice for the Tesla CEO, made all the difference to the DeMarcos, as they were able to get millions of eyes on one of their products.

“It was a very proud moment for us,” Acosta said. “He has a power of moving the masses.”