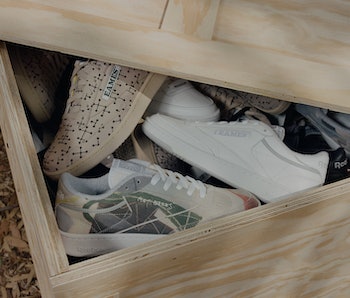 Mid-century modern furniture has proven to be a natural progression for sneakerheads and streetwear fanatics looking to expand upon their obsession with aesthetics. Rarity and rich backstories are central to all three fields, and Reebok is now bringing them together more formally in collaboration with Eames.

After christening their year-and-half long partnership with a Club C exclusive to “friends and family,” Reebok and Eames are now preparing to launch their first sneakers to go on sale to the general public. Leading things off will be the “Monotone” pack, featuring crisp takes on the Club C in either black or white intended to invoke Charles and Ray Eames commitment to accessible design. Both are minimalist while bringing back some of the sneaker’s original proportions, but the primary appeal comes from the Eames’ name appearing inside the square window and the Eames Office logo on the tongue patch.

The easily adoptable “Monotone” pack will first release on October 15 through Eames and Reebok’s websites, with a wider release to come October 21 from select additional retailers. And for those looking for a sneaker to better embody Eames’ more playful sneaker, an additional pack is also on the way.

The famous Dot Pattern — A second “Ray Eames Signature” pack will follow on a yet-to-be-determined date and will be headlined by a tonal beige club C adorned by Eames’ iconic Dot Pattern.

Despite becoming one of Eames’ most recognizable textile designs, the Dot Pattern wasn’t ever used during the lifetime of the husband and wife duo. The design was originally submitted for MoMA’s “Competition for Printed Fabrics” in 1947 but would then sit dormant in Eames’ archives until the late ‘90s. Eames Office, the brand chartered with continuing the designers’ legacy, brought the Dot Pattern to life in 1999 and has since applied it to highly sought-after curtains, pillows, tablecloths, and purses.

Now, thanks to Reebok, the nearly 75-year-old print becomes “hype.” The Dot Pattern Club C will release alongside another version of the silhouette bearing an all-over print of Ray Eames’ “Composition” painting from 1939. Each sneaker released with Reebok will also come in a box modeled after the famous Eames House in the Pacific Palisades neighborhood of Los Angeles.

Some may find this collaboration a strange sight, but at this point, which industry isn’t trying to cash in on kicks? Mid-Century Modern furniture has been the subject of trend stories about jawnz enthusiasts moving on to new interests for at least two years, and 2021 is shaping up to be the year that MCM becomes wearable. Hayato, an up-and-coming brand that bridges MCM furniture and workwear, recently sold out its entire run of double-knee pants and canvas jackets with Cesca cane webbing-inspired stitching. From head to toe, the hottest look may soon be to dress like the chair of your dreams.

This article was originally published on Sep. 28, 2021