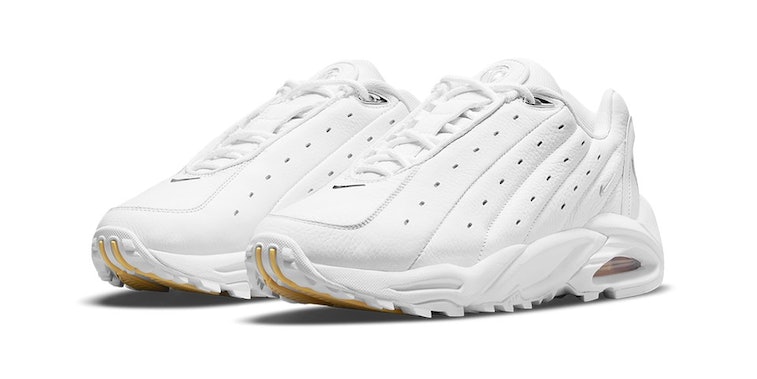 Now that Drake has released Certified Lover Boy — and the heaps of freaky merch that came with — the rapper is focusing on one of his many other projects, namely his work with Nike. Official imagery of Drake’s first sneaker with the brand, a white Hot Step Air Terra, suggests a release is coming soon.

The rapper’s sublabel, NOCTA, has supplied fans with hoodies, sweatpants, and activewear; but with Drake constantly rapping about his Jordans, we should have known shoes weren’t far behind. Champagne Papi first teased his Hot Step Air Terra kicks nearly a year ago in his “Laugh Now Cry Later” music video, with the sneaker boasting an all-white makeup. Sporting a chunky sole unit and sleek upper, the shoes were quickly compared to fellow rapper Kanye West’s Yeezy sneakers — but Drake’s kicks are rumored to cost less, and are likely easier to get.

Certified sneaker boy — Still, fans have been waiting on the Hot Step Air Terra for over a year now, and there’s no doubt Certified Lover Boy has inspired more people to drip like Drake. The rapper’s sneaker isn’t a new take on a classic sneaker, either — the silhouette is unique to him, incomparable to any of Nike’s other models.

Official imagery displays the upcoming shoes in all their glory, highlighting their perforated leather upper and exposed yellow air bubble at the heel. Hits of metallic silver accent miniature lateral and toe box Swooshes, while also dressing the eyelets and a NOCTA logo sitting on the tongue. Baby blue insoles add a pop of color as the defined midsole and heel overlays give the shoe a textured look.

Coming soon — Drake’s all-white Hot Step Air Terra is his only sneaker with official imagery, but the rapper has teased more iterations — and other silhouettes — on social media. A wild snakeskin version of the Hot Step is anticipated alongside a black and yellow model, both of which feature reflective detailing. Champagne Papi has also revamped his favorite Nike sneaker, the Air Force 1, adding miniature hearts and a quote to the classic kicks.

A release of the rapper’s first Nike shoe is now imminent, its official pictures suggest. The all-white Hot Step Air Terras are expected to retail for $150 each, with a fall launch anticipated — and at least if you miss out, there’s plenty of Drake drip on the way.