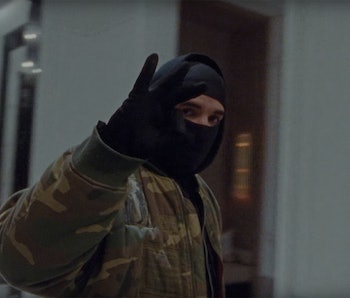 10 years after releasing Take Care, Drake is opening up like never before. To celebrate the anniversary of his sophomore album, the artist is virtually welcoming fans into his Toronto mansion, with commemorative merch, NOCTA gear, and OVO clothing up for grabs during an interactive tour.

Drake’s massive estate was first revealed to the public by Architectural Digest, which highlighted the rapper’s amenities like a full-sized basketball court and studio. Fans were also given a video tour during Drake’s “Toosie Slide” music video, where opulent marble flooring, KAWS statues, a huge indoor pool, and a jewelry-store-like vault nearly steal the artist’s spotlight.

Views — The mansion, known as “The Embassy,” allows a deeper look into Drake’s life, with virtual access to his bedroom, lounge, and studio. Within the bedroom, fans will find interactive links to El Chico Studios merch, as well as Better World Fragrance House candles, which last year debuted a candle that “smelled like Drake.” A button by a bed stand lamp allows users to turn the lights off, revealing a candlelit version of the rapper’s room complete with links to Certified Lover Boy merch and Wet, Drake’s impending cologne made in partnership with Better World Fragrance House.

In the studio, fans can explore more Certified Lover Boy merch alongside commemorative Take Care designs, including a “Marvin’s Room” T-shirt and a limited edition vinyl record of the album. Additional links lead to Drake’s OVO Sound record label and OVO clothing line, while another promotes his Nike sublabel NOCTA, which he has proudly worn as a “uniform” in the studio and on tour.

Hold On, We’re Going Home — Links leading to the rapper’s garage, basketball court, and closet have not yet launched, meaning there’s likely more commemorative merch and albums on the way. For now, fans can check out the interactive tour online, where the tour starts outside of Drake’s mansion to feature his lavish car collection — so you fancy, huh?