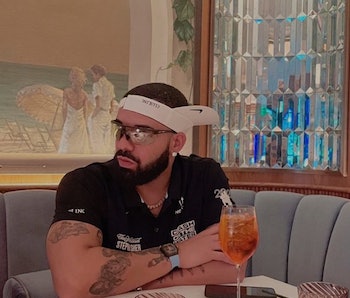 After teasing an underwhelming Air Force 1 collaboration, Drake is stepping up his footwear game with a new variation of his Nike Hot Step Air Terra sneakers. The Canadian rapper shared a black and gold iteration of the shoe on Instagram, highlighting its co-branding and reflective details.

Produced as part of his NOCTA sublabel, the Hot Step Air Terras were originally teased in Drake’s “Laugh Now Cry Later” music video, where the sneaker appeared in an all-white makeup. Sporting a chunky sole unit and ribbed upper, the sneakers were promptly compared to rival Kanye West’s Yeezy kicks — but Drake’s shoes will likely be more accessible.

Certified cover boy — Champagne Papi’s most recent preview of his NOCTA sneaker shows off a new color scheme, much brighter than the first Hot Step Air Terra we caught a glimpse of. The shoe’s black leather uppers are accented by hits of reflective 3M, while NOCTA and Nike branding at the toe, tongue, and heels shine a bright yellow. Hefty midsoles — complete with Nike’s signature Air bubbles — add more yellow and black to the model.

Drake’s latest sneaker joins his fast-growing collection of Hot Step Air Terra shoes, none of which have been released yet. The aforementioned tonal white pair, an all-black pair, and a wild gray snakeskin iteration of the NOCTA sneaker are expected to drop soon — perhaps as a pack — but neither Nike or the rapper has announced a release timeline.

As fans awaited the launch of Drake’s Certified Lover Boy album, people speculated that the rapper’s sneakers would release simultaneously. But between beef with Kanye, a NOCTA golf collection, and freaky CLB merch, Drake has seemingly been too busy and “Way 2 Sexy” for his upcoming sneakers.

Drip like Drake — Whenever Champagne Papi’s Nike Hot Step Air Terra shoes do release, they’ll sell out fast thanks to the huge name behind them. Per the leak account @pyleaks, the shoes are expected to retail for $150 each, with a fall drop anticipated — but with how long we waited for Certified Lover Boy, there’s no telling when we’ll actually see the shoes.