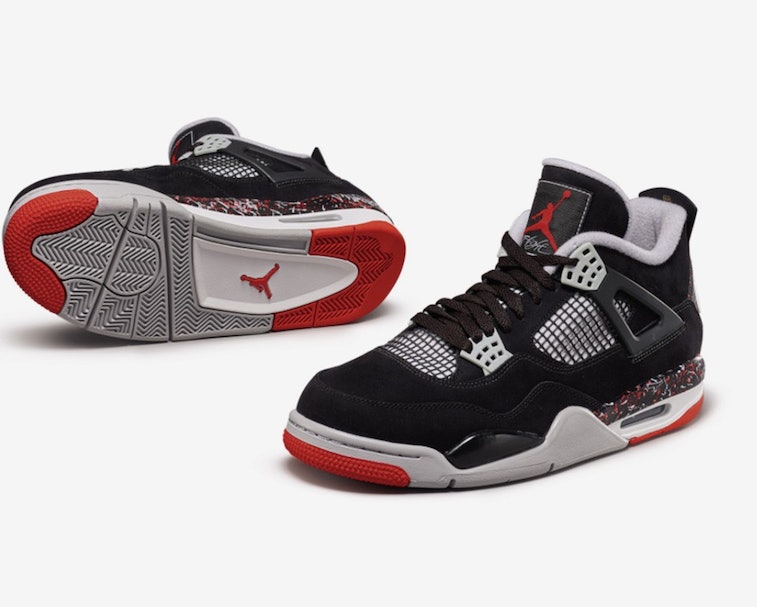 Drake's OVO Air Jordans have been largely underwhelming, but that could have changed had the Air Jordan 4 teased back in 2017 been released. The unreleased sample was largely similar to the Air Jordan 4 "Bred" but the most prominent change was in a paint splattered heel notch and logo badge. And unlike the OVO Air Jordan 4 released in a Toronto Raptors color scheme, it features the original Nike Air logo instead of the Jumpman.

A rare pair of these sneakers is now up for auction as part of Sotheby's lot of historic hip-hop items. Bidding on the OVO Air Jordan 4, which is set to open at 6 p.m. EST today, is estimated to fetch between $10,000 and $12,000. That makes it one of the more expensive items of the 119-item lot, which also includes the crown worn by The Notorious B.I.G. in his iconic Barron Clairborne photo and a collection of high school love letters from Tupac.

Coming in Drake's size 11 — While size 9 is the industry standard, this unworn pair up for auction is in the same size 11 that Drake wears — suggesting it may have been in his possession at one point. It's unclear, however, how the shoe made its way into the Sotheby's auction.

The OVO Air Jordan 4s will come with its original box, which includes a label noting the color scheme and delivery date. The cardboard inserts for the shoes are also intact, serving as further evidence that they're unworn.

Auction houses are getting really into sneakers — Sneakers are becoming a common sight on esteemed auction houses this year. Just last month, the Air Jordan 1s Michael himself wore while shattering a backboard in Italy sold for $500,000. Prior to that, another game-worn and autographed pair of AJ1s broke the record for most expensive shoes by selling for $560,000 through Sotheby's.

Christie's also auctioned a complete collection of Supreme skateboards last year, which can be seen as a weird stamp of legitimacy from auction houses that usually dabble in fine art. But if sneakers and streetwear are the most prized possessions for millennials and Gen Z, we can expect to see even more of such auctions going forward.