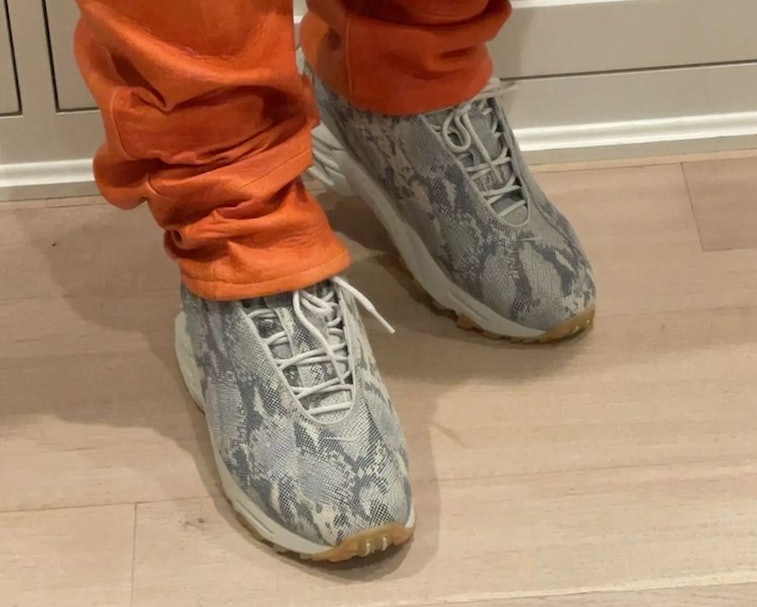 In the past few months, Drake has kept busy doing everything but dropping his anticipated album Certified Lover Boy. The artist recently teamed up with Chrome Hearts to create a custom Rolls-Royce Cullinan complete with quilted leather seats and rims engraved with the words “Fuck You,” while also picking up Billboard’s “Artist of the Decade” title. Drake’s latest creation may be a little more tangible for fans, however, as he teased his upcoming NOCTA x Nike Hot Step Air Terra sneakers.

As one of Nike’s biggest supporters — even going so far as to photoshop Adidas’s logo out of pictures — Drake has made it clear how proud he is of his NOCTA sublabel. “This opportunity is something that I’ve been waiting on for a really long time,” Drake wrote in his note alongside the launch. So far, consumers have only seen clothing like hoodies and sweatpants drop from the sublabel, but with Drake constantly rapping about his Jordans, we should have known shoes weren’t far behind.

An entirely new silhouette — A few months ago, Drake debuted his Nike Hot Step Air Terra in his “Laugh Now Cry Later” music video, with the sneaker boasting an all-white makeup. Sporting a chunky sole unit and sleek upper, the shoes were quickly compared to fellow rapper Kanye West’s Yeezy sneakers — but Drake’s kicks might cost less, and be easier to get.

Drake’s most recent tease of the shoe shows off a new color scheme, much more wild than the first Hot Step Air Terra we caught a glimpse of. The sneaker’s uppers are entirely covered in a gray snakeskin pattern — reminding us not of Yeezys, but Drake’s unreleased OVO x Air Jordan 11 “Snakeskin” PEs.

To avoid going overboard with the theme — something Drake can be guilty of sometimes — the shoe laces and exposed side stitchings keep it neutral in a white shade. Midsoles wrap up the sneaker, taking on a matching white hue, while the outsoles are dressed entirely in brown gum.

Drip like Drake — As a new silhouette with a huge name behind it, Drake’s Nike Hot Step Air Terra is sure to sell out fast, regardless of which color scheme you prefer. Per the leak account @pyleaks, the shoes are expected to retail for $150 each, with a fall drop anticipated. As fans wait on the arrival of Drake’s album — and now these sneakers — we wouldn’t be surprised if he and Nike dropped the two projects simultaneously.