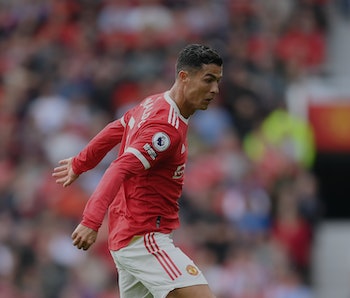 Cristiano Ronaldo smashed sales records before he even stepped onto the pitch for Manchester United. Online sports retailer Fanatics reports Ronaldo’s No. 7 shirt for the Red Devils sold more in a single day than any other player’s ever had, besting Lionel Messi’s move to Paris Saint Germain, LeBron James to the Los Angeles Lakers, and Tom Brady to the Tampa Bay Buccaneers.

Overall, Ronaldo’s jersey has already generated more than $219 million in sales, according to analysis from I Love the Sales. While Adidas, Man U’s outfitter, keeps the majority of the sales, the club’s percentage has already covered the $15 million transfer fee it paid to bring home its former player. Sales for Ronaldo’s jersey have also nearly doubled that of Messi’s for PSG, which have accumulated more than $121 million.

“We are tracking record breaking sales of ‘Ronaldo 7’ football kits across online retailers, to the point where demand is now outweighing supply,” said I Love the Sales co-founder Stuart McClure. “Online searches for the ‘Ronaldo 7’ shirts have increased by over 600%, compared to last summer’s football shirt data. Not only has Ronaldo smashed the record for the fastest-selling shirt in Premier League history, he’s also made back his £12.9m transfer fee before kicking a ball for the club.”

Good luck finding one — Ronaldo’s new shirt is nearly impossible to find online with the exception of sizes on the far ends of the spectrum. Man U’s official club store only has his replica home shirt left in XXL and 4XL sizes, while Adidas is limited to just XS. Fanatics, meanwhile, is totally sold out but does still have small, medium, and large sizes for his third jersey in blue.

Because of its reacquisition of Ronaldo, Manchester United now has the highest overall jersey sales in the Premier League, up from its third-place spot in the previous season. Chelsea remains in the second spot, while Liverpool sits firm at third, and Arsenal has fallen all the way from first to fourth, according to I Love Sports.

Now, we just wait to see what the Ronaldo effect does for Man U’s trophy cabinet.