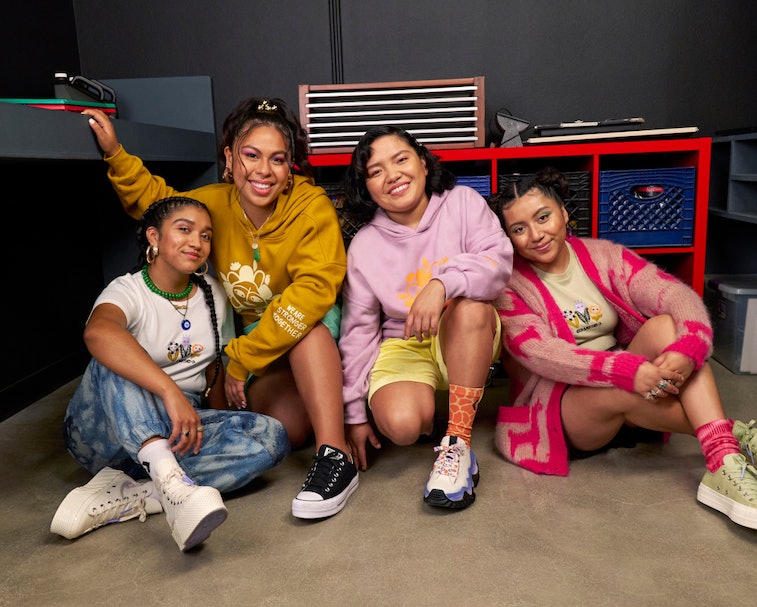 To celebrate Women’s History Month this year, Converse is presenting a collection of footwear and apparel made by and for women. The collection’s sneakers are set on a pair of Run Star Motion Ox and multiple Chuck 70s and Chuck Taylor All Stars. Inspiration for the shoes’ design comes from wildflowers, which grow at their own pace but thrive when they’re together.

A bouquet of sneakers — These greenery motifs come in the form of embroidered flowers and split uppers that give way to floral fabric. Sage green, cream, lavender, and denim blue serve as the main color palette, except on the Motion Ox, whose black outsole gives way to a gradient blue midsole and white uppers with funky laces.

Additional details include a hidden message behind the shoes’ tongues, reading “We Are” on one foot and “Stronger Together” on the other. As for the apparel, the capsule consists of pink, brown, white, and beige hoodies and t-shirts that display that philosophy of feminine collaboration.

Converse called upon Las Fotos Project, a community-based photography program, for the campaign, and Thalia Gochez, a member of the organization, to shoot the collection’s lookbook. Gochez also took part in Converse’s Latinx Heritage Month campaign for ¡Mi Gente, Mi Barrio! in 2021.

Get to steppin’ — The Converse “Stronger Together” footwear and apparel is now available on Converse’s website with pieces ranging from $55 to $110 for sneakers. More brands will likely step up to the plate to honor women throughout the month of March, and it’s nice to see Converse giving the ladies their flowers so early on.