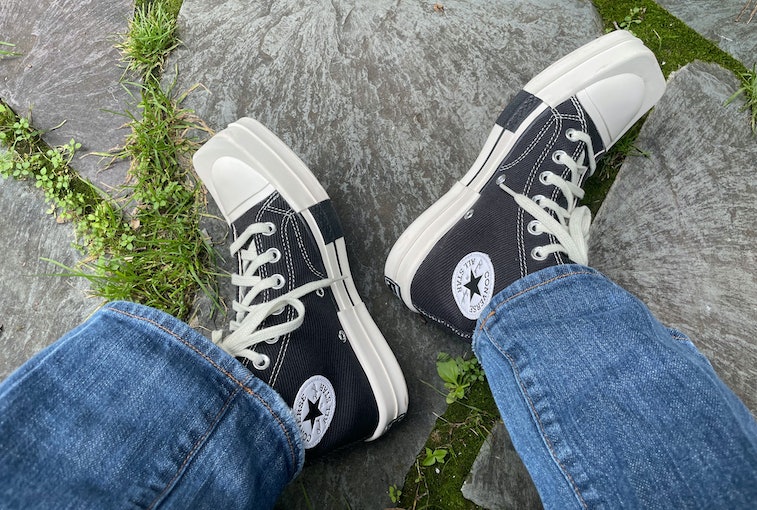 Rick Owens’ Ramones sneaker, which debuted in 2013, has always served as an homage to Converse’s iconic Chuck Taylor and the namesake band that wore said sneaker so religiously. It’s only fitting that Owens finally collaborate with Converse to make an official rendition of his Chuck Taylor — paying tribute to its punk roots, of course.

"When I think of Converse, I think of the black and white Chuck Taylors and the punk rock generation. These have always been iconic pillars of my aesthetic," the designer said in Nike’s press release. "Wearing Chuck Taylors, you align yourself with a generation that was experimental. There is a confident dynamic to the subculture.”

Owens has certainly aligned himself with the experimental generation; his distorted designs are now influencing the next one. Ever since the January announcement of Owens’ Converse collaboration, hundreds of fans — including myself — were eager to get their hands on his distorted Chuck 70 sneakers. Remixed in high and low iterations under the designer’s DRKSHDW sub-label, the shoes have gotten the true Owens treatment: monochromatic shades of white and black dress the classic kicks while a modified silhouette gives them a signature gothic look.

I will admit, I’m more of a Rick Owens fan than a Converse fan, but the designer’s take on the classic sneaker has made me appreciate its extended silhouette. With a triple toe cap, double sole, extended tongue, and square toe — a first for the sneaker model — the Chuck 70 has literally been stretched out to new heights (and lengths).

Wearing the sneakers gives me the same look: My legs appear longer and my feet look elongated, as if I took a picture of myself with a wide lens. While I had already experimented with strange footwear silhouettes like platforms, pointed toes, and studded outsoles, Owens’ design take me aback once on my feet — he successfully designed a sneaker capable of making real-life look distorted.

While the lengthened design did get some getting used to — a few scuffs on the extended toe cap serve as proof — Owens’ Chuck 70 is surprisingly comfortable. I had previously sworn off Converse’s classic sneakers because of how narrow they were, and I wasn’t sure Owens’ weird add-ons would help. Yet the shoes’ double sole and durable canvas are forgiving to my wider feet, actually offering more cushioning and structure than the traditional Chuck 70.

Although I had already prepared myself to suffer through the pain for these sneakers, I am immensely relieved they turned out to be somewhat practical. I wouldn’t wear them for rigorous exercise, but I could certainly get through a day comfortably — and fashionably — in Owens’ modified Converse.

Perhaps what made hypothetically suffering for the designer’s sneakers worth it were their square toes. The divisive shape — which GQ claimed “must die” — is a testament to Owen’s experimental ways and adds a high-fashion punk look to the classic Chuck 70. And as someone who’s always loved the ‘70s-esque cut, and is currently into Avril Lavigne’s early ‘00s looks, the square-toed Converse simply spoke to me.

Styling the sneaker wasn’t difficult either: Low-rise bootcut jeans let the square toe stand out, while pairing the shoes with a skirt allowed its extended tongue to really shine. As funky as Owens’ design is, its black and white makeup allows it to be fairly versatile — meaning all my outfits may revolve around the DRKSHDW sneakers until further notice.

Owens’ collaborative sneaker, officially known as the Rick Owens DRKSHDW x Converse Chuck 70 “TURBODRK,” is set to launch at 10 a.m. ET on July 27 on his own website as well as Converse’s site with an expected retail price of $170. Although pricey, the sneakers are well worth it: With Owens, the remix is always better than the original.