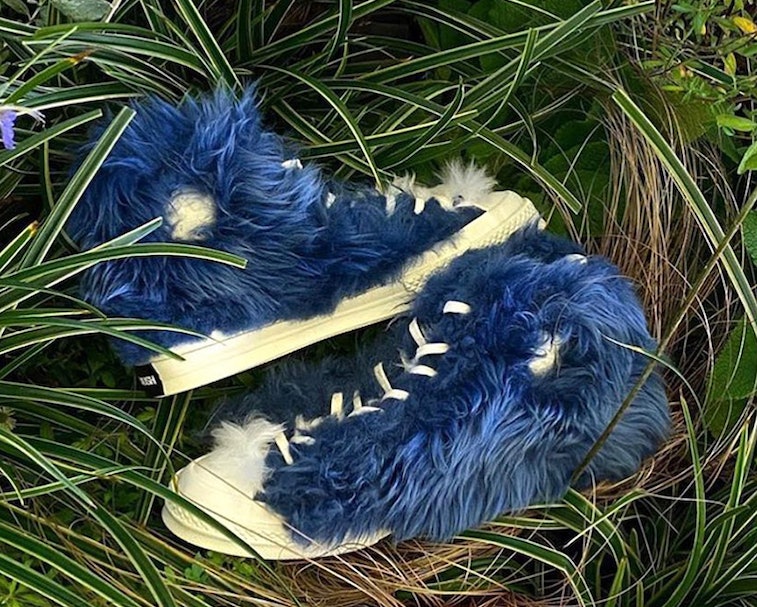 Winter is coming. And sometimes that means sacrificing a look for warmth, or vice versa. But instead of opting for thin, breezy canvas this year, try a faux-fur-covered sneaker. Ambush has announced a second collaboration with Converse, this time dropping a furry iteration of the Chuck 70 silhouette.

Though it was assumed the Japanese brand was occupied with their upcoming Dunk Highs, Ambush has evidently been splitting their time between Nike and Converse. Keeping busy, the brand also just collaborated with Beats, dropping the tech brand’s first glow-in-dark headphones. Given the wild creations Ambush has designed in the past, we shouldn’t be surprised with these furry Cookie Monster shoes.

Hairy high tops — Much like its moniker, Ambush, founder Yoon Ahn’s second collaboration with Converse capitalizes on the element of surprise with new takes on the classic Chuck sneaker. Unlike the first collaboration between the two, this new collection boasts more color and texture. The drop also includes a waterproof sneaker-boot hybrid that comes in similar black and blue colorways. It looks like a Sesame Street character, but one with a stylist.

The sneaker, which Ahn herself teased on Instagram, comes in two colorways. One pair arrives in navy blue and off-white, while the other boasts more classic shades like black and white. Elaborate spiky fur covers the upper of the Chuck 70 sneakers, while the familiar All Star branding is still visible on the lateral side.

Inspired by the lavish shaggy coats of the ’90s, this sneaker is made of shearling wool, giving it a unique look and feel. While the shoes kind of look like they belong on a Muppet, their poodle-like appearance also makes them feel posh. The style is very reminiscent of those raver boots — you know the ones — but somehow, these sneakers look just as comfortable.

Much like the brand’s other collab with Converse, the license plate on the heel of the sneaker reads "AMBUSH," as does the sock liner. The laces are capped with blue rubber aglets to add a pop of color.

Shop the shag — The Wookie-esque shoe launched in China on November 21, and will launch globally on November 24. The high tops are set to retail for $140 on both the Converse and Ambush websites. These ultra-furry kicks will add an offbeat touch to any look — though I can’t promise they’ll hold up as well in any sudden downpours.