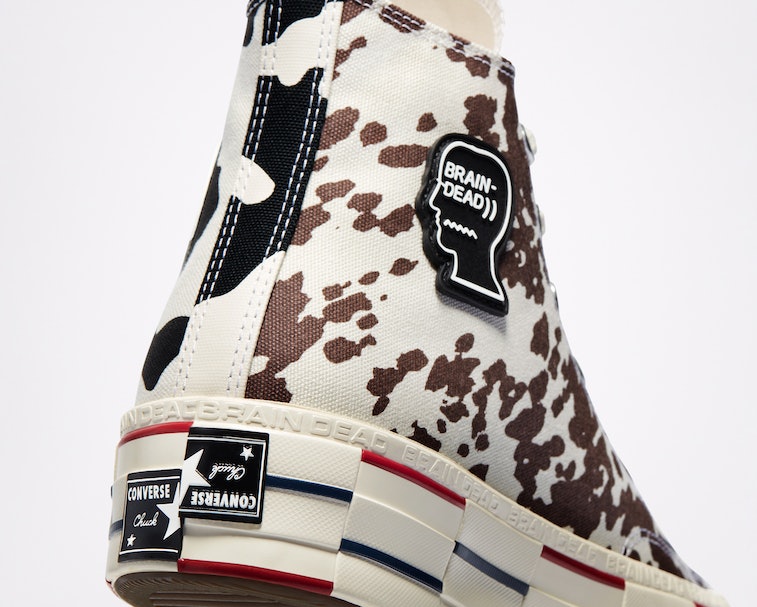 Cue “Mooo!” by Doja Cat. One of 2020’s biggest trends has been animal prints, notably cow print. Brain Dead, in its second collaboration with Converse, is jumping on board the trend with three limited-edition shoe designs, all playing with different cow-inspired patterns. Two silhouettes — the Chuck 70 and Bosey MC — are featured in the new collection.

As a brand that describes itself as being “defined by disruption,” Brain Dead wanted to take something consistent and reinterpret it in an unexpected way. Brand founders Kyle Ng and Ed Davis felt it was only natural to work on a sequel collection with Converse, a sneaker brand known best for its classics. Their first collaboration in 2018 resulted in two sell-out sneakers, including a different interpretation of the Chuck 70 now reselling for almost $400.

Mooving up — Now a confident sophomore collaborator, Brain Dead has boosted the Chuck 70 to new heights, and I mean that literally. The brand reworked the shoe with a massive platform, splicing up the foxing tape for a double-stacked effect. Continuing the theme of visual distortion, a divided Converse license plate adorns the back of the heel. Brain Dead branding is found around the top of the sole, co-branded on the sock liner, and molded on the lateral logo patch.

The Chuck 70 arrives in two colorways. A loud version combines three types of cow print ranging from brown to black to white between the medial, tongue, and lateral panels. If you want to play it safe, limited amounts of an all-black version will be available exclusively at Dover Street Market.

Looking to juxtapose itself against the Chuck 70, the Bosey MC silhouette lays low. The sneaker is a modern interpretation of Converse’s 1940s Lakestream wading shoe, a utility aspect which Brain Dead explores through graphics and details. The low top shoe’s upper is canvas, like most Converse sneakers, but protected with monomesh. For added utility, the fun cow print design under the mesh is contrasted by a set of green lace cables that anchor down the black rope laces. A black outsole completes the shoe.

Converse with a cause — To celebrate the release of the next installment between Brain Dead and Converse, the duo has released the short film Variations directed by musician (and previous Brain Dead collaborator) Dev Hynes. Variations draws parallels between the universality of Converse's Chuck Taylor and the boundless varieties of expressions possible by young musicians.

Alongside the collection, Brain Dead has set up “Luminous Sound,” a fund that aims to ensure future generations have equal access to music education and resources. The Inner City Youth Orchestra of Los Angeles, which is the largest majority-Black orchestra in America, is the first recipient of the fund.

A special charity shirt benefiting Luminous Sound is available for pre-order via Brain Dead’s website starting at 10 a.m. P.T. on November 19. The sneakers drop the same day on the website and are also available on Converse.com and additional retailers worldwide. All models retail for $140, though they’ll probably resell for twice as much. I mean, seeing Dev Hynes endorse these sneakers is enough for me to hand over my money.