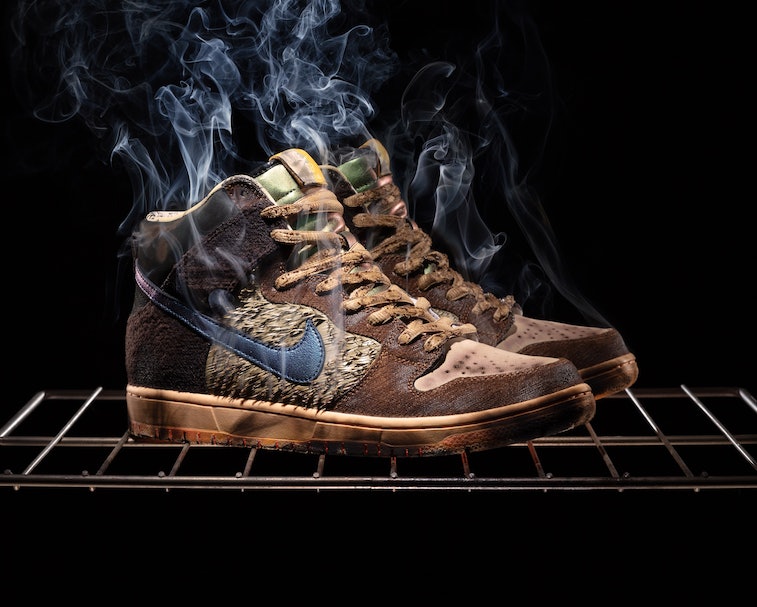 Nike's year of pushing the Dunk hard and fast has largely focused on the Low, but the High is about to get some love for Thanksgiving.

Nike SB and Concepts have partnered on a bananas Dunk High Pro to be known as the Turdunken. Taking the concept literally, Dri-Fit chicken socks are meant to be worn inside the heavily textured and utterly ridiculous sneaker that represents duck. Completing this three-way of meat is the wrapping paper, which comes with a turkey adorned with Concepts' logo.

"We've definitely never taken ourselves too seriously," Concepts creative director Deon Point said in a release. "We’re well-versed in sport. We come from luxury. The thing with us that always gets overlooked is our sense of humor. We love to have fun."

Fun for the family — The idea behind the Turdunken, besides bringing the three bird roast to your feet, is to celebrate family. Whether it's kith or kin, family is a key element to any Thanksgiving celebration, and it's also one of the most endearing features of any venerable skate shop. Because football is also all but inextricable from Thanksgiving, and because of John Madden's cheerleading, the Turdunken will come with a turkey leg-shaped Nerf football, too.

Of the three meats in a turducken, it's the duck that's the focus on the shoe itself. The quarter uses laser cutting on a down-like material to create the appearance of feathers, and it's combined with a tip and foxing that utilizes two different shades of brown in a shaggy suede. Both the Swooshes and the tongue are iridescent just like duck's secondary wing feathers, and a toile print of more ducks appears on the sock liner.

The sneaker, socks, and football will all come in a special oven-themed box that continues Concepts' dedication to elaborate packaging.

Concepts has a history with meat — The Boston-based skate shop's most famed sneaker is the Lobster SB Dunk Low, which has released in several different colors since 2008 as a nod to the rare crustaceans. The most limited of all is the yellow version, given only to friends and family and has sold for more than $16,000. The original red and blue versions in 2008 are also highly covetable, typically reselling for nearly $1,000. Concepts celebrated the 10-year anniversary in 2018 by releasing new purple and green variants, which were the prize for a raffle earlier this year that raised more than $130,000 for charity.

Lesser-known from Concepts is the "When Pigs Fly" Dunk High released in 2012 as a send-up of the idea of sneaker "grails."

The Turdunken will join Concept's lineage of meat / animal-themed sneakers on November 14, when it releases through Concepts' Boston and New York stores. It'll then drop at select skate shops on November 20 before hitting the SNKRS app the next day. Expect demand to be high for this absurd SB Dunk, making other releases from this year as easy as the queue for Thanksgiving dinner.