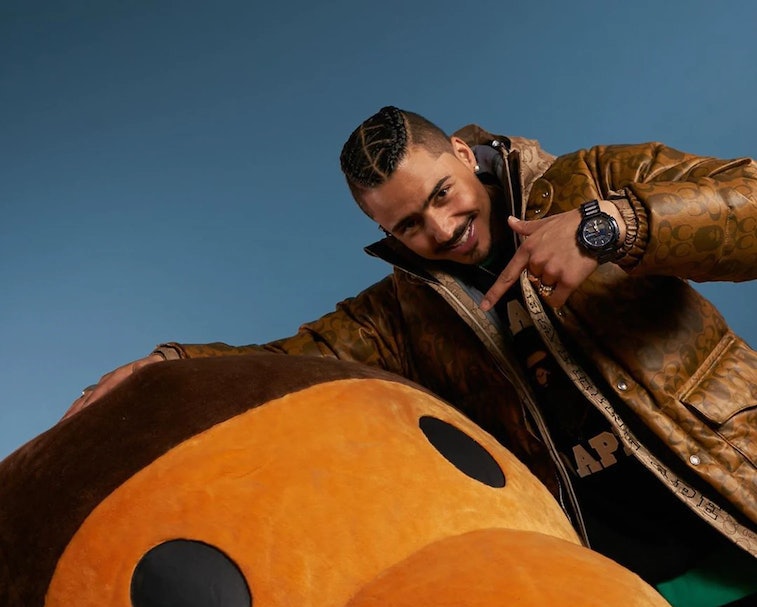 The relationship between streetwear and high-fashion has evolved from acrimonious to novel to ubiquitous. Whether it be through direct partnerships or inspiration that's no less transparent, luxury houses are firmly entrenched in streetwear, cranking out staples like hoodies, sneakers, and graphic tees at an elevated price. At some point, the bubble will burst, and high-fashion will have to move on to something else. That decision will ultimately be decided by dollar signs, but if I had to mark a moment commemorating the jig going up, it very well could be the reveal of Bape's latest collaboration with Coach.

The seminal Japanese streetwear brand, founded in 1993 by Nigo, has teamed up with the American luxury house for a series of goods combining their respective signatures. Right now, we're just in the teasing phase, but it's enough to make me hurl. An extravagant brown leather puffer links Bape's Planet of the Apes-inspired logo with Coach's "C" in an all-over print. That same dual-branded motif also appears on a clutch rendered in the same colorway as Bape's "Cloud Camo."

A questionable relationship — It's hideous, but I'm not here to talk about the collaboration from a design perspective. This partnership simply has no reason to exist. It's a shameless grab for cash, one that'll certainly work in that regard. Justifying a collaboration requires a compelling story, a narrative that argues for its existence beyond the nature of "We know it's a thing you, or someone else, will buy." Leave that tired model to Anti Social Social Club.

Bape and Coach have nothing in common beside consumerism. If there's a story here, it's how Bape has gone off the rails and a brand like Coach will pander to a non-native audience if there's money to be found.

What's in the water? — Ironically, Nigo coined the name A Bathing Ape (aka Bape) as a reference to the Japanese idiom 'A bathing ape in lukewarm water.' It's a term for people who overindulge, who stay in the bath until it's no longer hot. This can be read as a sort of tongue-and-cheek premonition of the brand's eventual hyper-consumptive audience. But under Nigo's direction, the brand remained strong. It never overindulged, it never strayed too far from its roots as it became one of the crown jewels of streetwear.

A survey of the brand's collaborations under his stewardship reveal work with like-minded brands (e.g. Supreme and G-Shock) and people (Kanye West, Pharrell, and graffiti legends Futura and Stash). Even when Nigo strayed from those obvious ties, it still made sense. Partnering with Pepsi provided an enormous platform for a brand that wasn't as well known as it is today. Marvel, DC Comic, and Star Wars (which was revisited last year) tapped into an intersecting culture of nerdom.

Since Nigo sold 90 percent of his stake in 2011 and left, Bape's collaborations have made less and less sense. Amazon, Angry Birds, and Minions were all head-scratchers. Several additional rappers have aligned with the brand, making the partnerships less precious. Kanye and Pharrell, both friends of Nigo, were some of the earliest adopters of Bape in hip-hop. My favorite collab of all came with Kid Cudi, who worked at Bape's NYC store before his career took off. The standout piece was the "Party Tee," which featured a cartoon Cudi along with a group of Bape's characters and the phrase "Take another shot or you're soft." Wiz Khalifa, Big Sean, Lil Yachty: those are pushing it.

Luxury and streetwear gone wrong — Coach doesn't even mark the first questionably foray into luxury for Bape. Last year, the brand linked with MCM for a gaudy collection plastering each other's patterns together. Turning around and working with Coach a year later shows even less discretion. If Bape will work with anyone, why should we care? Coach, and to a lesser extent MCM, could have provided Bape with a larger platform in the past. Those days are over. Bape doesn't need Coach as much as Coach needs Bape. Even if some of Bape's cool rubbed off on Coach, which it won't, that would leave a bare mark on the former. The uneven relationship only serves to undermine what was once an untouchable brand. Whatever inroads Coach has made in the past seven years, I still think of it more for soccer moms.

Coach has dabbled in streetwear and skateboarding since Stuart Vevers took over in 2013, even staging the brand's first menswear show in 2015 around a specially built skatepark. That connection may have helped breath new life into Coach, but it rings hallow. The closest thing I can find to Vevers' having any sort of personal relationship with skateboarding is Singapore's Female magazine referring to him as a "skatewear-turned-streetwear guru" without providing any subsequent evidence.

Bape doesn’t need Coach as much as Coach needs Bape

Come back, Nigo — Dior, under the tutelage of Kim Jones, has faced recent criticism for collaborations with Stüssy and with Nike on the Air Jordan 1." While I'll concede that the resulting product has been underwhelming, Jones can still justify treading in streetwear. He's a well-known devotee to the AJ1, and his work in the field of streetwear dates back to Pastelle, Kanye's brand that never saw a proper launch. When he was at Louis Vuitton, he spearheaded a landmark collaboration with Supreme, coming 17 years after the French giant hit the nascent NYC brand with a cease-and-desist letter.

If that collection hadn't arrived with such fanfare, botched release aside, I don't think Virgil Abloh would have taken over the reigns after Jones' departure. Call the Dior Air Jordan 1 an overpriced dud all you want, but its existence is justifiable. I can't say that about Bape and Coach.

Nigo is still making interesting work, only now it's over at Human Made. He left the water at Bape when it was still hot, and why anyone's still sitting in it is beyond me.