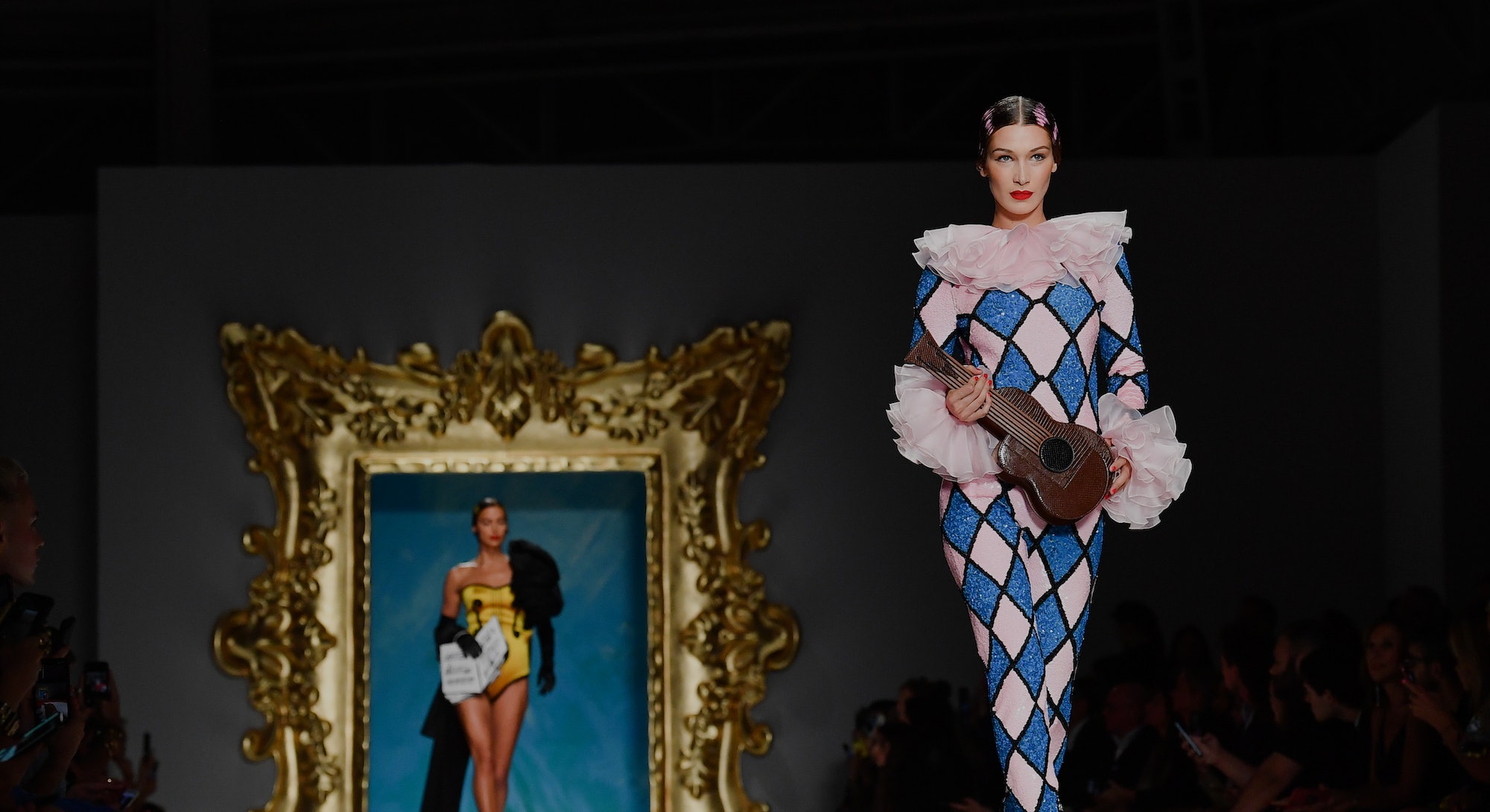 When you think of clowns, you’ll likely think of Pennywise, Ronald McDonald, and childhood birthday parties. Their garish colors, ruffles, and harlequin makeup appeal to horror and slapstick comedy, not couture.

Only six years ago, clown sightings across the country brought regular headlines for a common fear of the characters. A 2016 Vox poll found that Americans were more afraid of clowns than climate change, terrorism, and death. Yet the circus characters have become the face — or, rather, the muse — of “clowncore,” a theatrical fashion trend with roots in everything from designer fashion houses to social media.

As its name suggests, the larger-than-life aesthetic incorporates maximalist attire traditionally worn by clowns, such as polka dots, exaggerated silhouettes, clashing patterns, and bows. For a growing number of fashion enthusiasts on TikTok, as well as on the world’s biggest runways, the flamboyant look speaks to the performance element of fashion (and to clowns themselves, of course). While some people take their dedication to clowncore to the extreme, others incorporate the aesthetic in a way more easily adopted for everyday wear.

For Sara Camposarcone, clowning around is an essential part of dressing up. The TikTok creator, who’s styled everything from trash bags to wedding dresses, welcomes (if not encourages) maximalism and considers clowncore an extension of her personal style. “I think [clowncore] has a lot to do with expressing your authentic self,” she tells Input. The aesthetic’s signature styles force wearers to put their own spin on the trend, she says, rather than copy a look piece-by-piece. Camposarcone personally favors oversized ties, exaggerated collars, and tutus.

“Growing up and learning about fashion, you were taught that this color doesn’t go with this color, and this pattern doesn’t go with this pattern,” Camposarcone says. Clowncore does away with such rules, bringing more originality and fun to fashion — two aspects desperately needed after two years in a pandemic. There’s also a sense of nostalgia within the trend that calls back to childhood birthday parties and circus visits: “[Clowncore] helps people feel like a kid again,” says Camposarcone.

That’s not to say that all sophistication is lost within the aesthetic: Oversized accessories and harlequin-inspired prints tap into the whimsical aspect of clowncore without becoming a full-on costume. According to Camposarcone, colors and patterns aren’t even needed to harness the trend — look to Japanese street style and you’ll find tonal, exaggerated silhouettes reminiscent of those found in carnivals. Look to indie brands Molly Goddard and Tyler McGillivary for eccentric prints and enlarged collars. And if you’re like Camposarcone, look to couture shows from Christian Dior or Moschino, where you’ll find drawn-on pouty lips and oversized, trailing ruffles.

“Sometimes I’ll look at myself wearing these fun outfits and think I look insane. But I love it.”

With a range of styling options, clowncore may have a longer-lasting power than most trends, but that depends on how much everyday people are willing to embrace its absurdity. To Camposarcone, the aesthetic isn’t a trend at all: “Even if you’re not someone who wears [clowncore styles], I think the happiness and joy of it will make [clowncore] stick around in the fashion industry for a little bit,” she says. Camposarcone sees the aesthetic expanding into a larger rebellion against trends, inspiring others to explore their personal style no matter how wild it might look. “Sometimes I’ll look at myself wearing these fun outfits and think I look insane,” she admits. “But I love it.”

Clowncore is “a little ridiculous,” but that’s the performance of it, says fellow TikTok creator Kelley Heyer. Theatrical in nature, the aesthetic allows participants to become whatever type of clown they desire. Heyer, who is genderqueer and uses she/they pronouns, sees clowncore as a way to perform the truest version of themselves.

Heyer first tapped into the aesthetic in early 2021 and is widely considered by her TikTok peers as the originator of clowncore on the platform. Clowncore spoke to Heyer as a “genderless expression of a character,” they tell Input, with the ability to include anyone under its (presumably polka-dotted) umbrella.

Having taken clown classes to acquire her BFA in theater, Heyer carries a deep appreciation for the trend. “I fell into fashion because I would walk into costume shops and see all those big frilly gowns and character shoes,” she says. “I wanted to wear everything — I wanted to play every part.”

The art of clowning — because it is an art, according to Heyer — is its own style of theater and acting, they say. “In clown school, you're playing these want and need games where, [for example], you really want to get this cupcake, but someone told you not to,” she adds. “So you're sitting there looking at the cupcake and you're doing all you can not to eat it… and that's the character, the clown.”

Every clown is an archetype with a certain personality, want, and need, Heyer notes, listing off a number of characters including the Pierrot, the harlequin, and the circus clown. “Harlequin clowns were traditionally played by men who wore skin-tight leotards, while Pierrot clowns stuck to black and white outfits but with big exaggerated buttons.” There’s a range of ways to style clowncore; you don’t have to conform to the box of your own miming creation.

Being a clown can be a legitimate career, Heyer says, which is why she tries to translate the aesthetic into a style of her own. Heyer shies away from extreme clown makeup and wigs, instead opting for bibs, party hats, and rosy cheeks — always thinking “joy, joy, joy,” they add. With much of clowncore focused on layering or maximalist styles, Heyer also encourages people to “DIY that shit.” If you don’t have a party hat, glue some sparkles on an old headband or make earrings out of Barbie heads, she recommends.

“I think if you put on an outfit and you feel like a silly little fool, that’s clowncore.”

Still, the absurdity of clowncore isn’t going to be embraced by everyone. Both Heyer and Camposarcone have dealt with a number of hateful comments on social media, as people question their sense of style or call it satire. “I don’t dress this way as a joke,” Camposarcone says, “But I can see how a super over-the-top clown outfit could be a joke, because that’s what clowns are known for.”

Heyer agrees, saying the remarks only emphasize the performance of clowncore: “People may not like [the way I dress], but they’re still commenting on my TikTok,” she says. “They still bought a ticket to the show.”

Clowncore is about being carefree and having fun, something most of us could benefit from. Despite its theatrical roots, the aesthetic allows anyone to express their authentic self and likewise has no hard definition. “I think if you put on an outfit and you feel like a silly little fool, that’s clowncore,” says Heyer. All you have to do is put on a show.