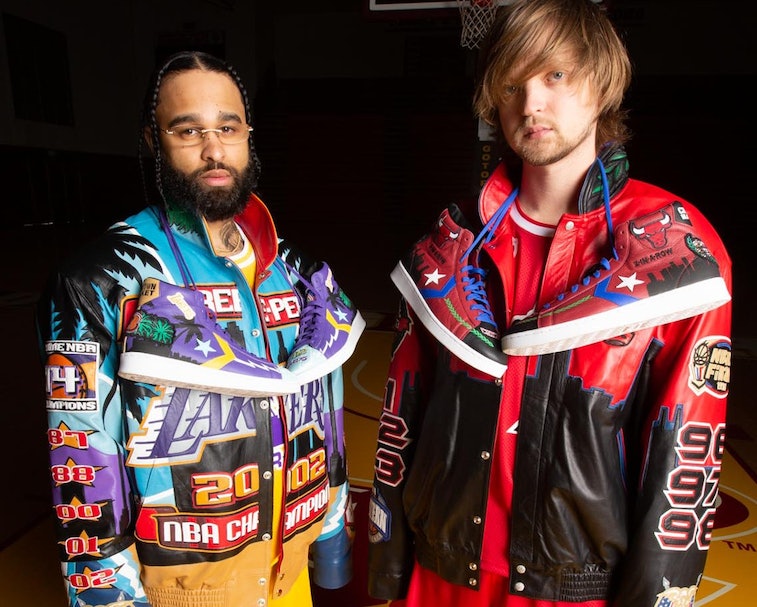 Some of the most iconic images from Kobe Bryant's career see him wearing the Jeff Hamilton jacket made especially for the Los Angeles Lakers' 2002 NBA Championship. Title-winning basketball players of that era were treated to the maximalist leather pieces from Hamilton, a Parisian designer obsessed with American sports.

Michael Jordan got one, too, four years earlier when he completed his second three-peat with the Chicago Bulls. Either of these Bulls or Lakers jackets are grails to the "Ball Is Life" crowd, and the secondary market reflects the enduring appeal. Recently, the '02 Lakers jacket sold for $3,500 on Grailed, making it one of the most expensive items sold on the platform all week.

Most of us will never get our hands on Hamilton's highly coveted jackets, but Chinatown Market and Converse will give us an unexpected alternative through their new collaboration.

Jackets for your feet — Chinatown Market has pulled directly from the '98 Bulls and '02 Lakers jackets for its Converse Chuck 70s and Pro Leathers, complete with the screamin' patches. The two championship teams are commemorated with each of the two sneakers, which feature palm trees for the Lakers and the Chicago skyline adorning the Bulls joints.

Converse has been pushing the Pro Leather hard as of late, but it's the classic Chuck 70 that works best with Hamilton's design language famous amongst sports fans. It's hard to say if the jackets have truly translated over to sneakers — what some may see as ugly, others may love — but it's the closest thing many of us will ever get to the leather worn by Kobe and Michael.

Sneaker culture was directly driven by basketball from the very beginning. As this once ball-driven interest has strayed from its roots and gone mainstream, it's refreshing to see the sport once again at center. If you aren't a hoop head, I can't imagine that you'll be fawning over Chinatown Market's ode to Jeff Hamilton.

A release is imminent — Chinatown Market has briefly teased its new kicks with Dennis Rodman holding them, and the lookbook images here come courtesy of the U.K. sneaker boutique Size?.

None of the parties involved have indicated when the Converses will release, so basketball fans will just have to wait patiently. It may not be too long, though, as the perfect occasion is just weeks away with the NBA All-Star Game.